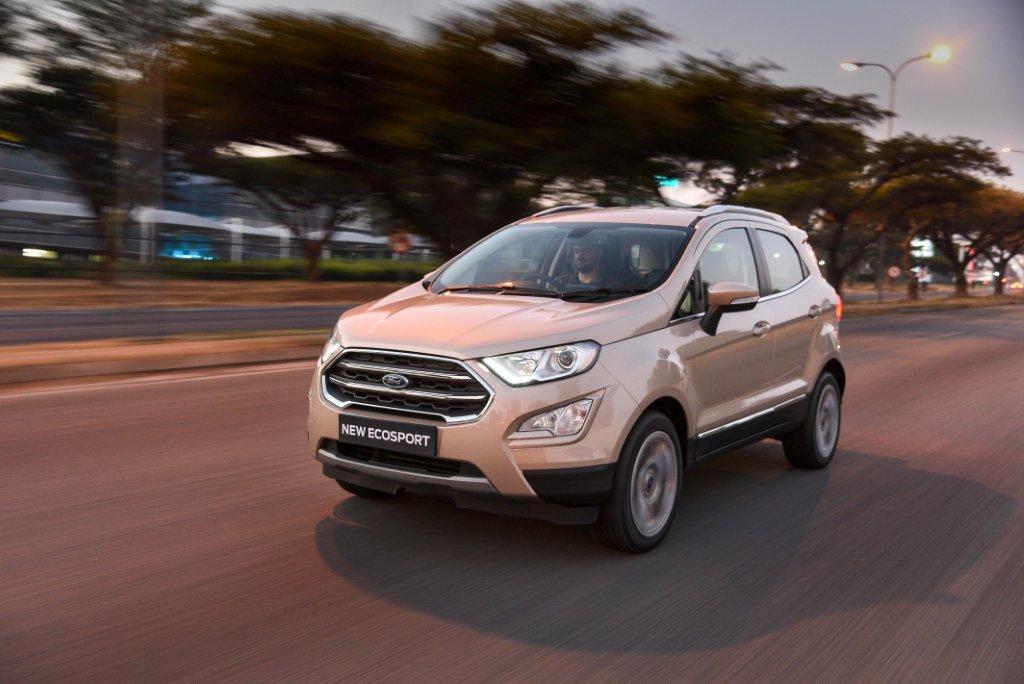 Brian Joss – It’s been my month for Ford. First, the Figo (The Gremlin, October 3), then the new generation EcoSport which features in today’s edition, followed by the Fiesta (watch this space).

Ford seems to have ticked all the right boxes with the EcoSport which first made its appearance on South African roads in 2013.  So much so that since its launch in this country the EcoSport, one of the trail-blazing SUVs, has sold more than 45 000 units, according to Ford.

I predict that the latest generation will also set the sales charts alight and that in a highly competitive sector of the market.

Globally, manufacturers started producing sports utility vehicles (SUVs) in 2000 but five years ago they weren’t as ubiquitous on our roads as they are today. Now they come in all shapes and sizes from boxes on wheels to vehicles that are the last word in luxury with every conceivable bell and whistle.

I drove an EcoSport soon after its debut here and I was suitably impressed.

Coincidentally,  it was also the flagship of the range, the Titanium Auto.

I remember using that old cliché, less is more, referring to the engine which delivered 92 kW of power and 170 Nm of torque, which then put it in the same  ranks as vehicles powered by a 1.5-litre or 1.8-litre motor. But I was disappointed with the fuel consumption which wasn’t anywhere near the figures claimed by Ford.

The EcoSport is as peppy and as comfortable today as it was when it rolled into South Africa.  The exterior changes have been mainly cosmetic but the interior which was so-so has undergone a metamorphosis. Beneath the skin there have also been a few tweaks which have helped to make the ride more comfortable. The outward signs incorporate the design traits which were introduced with the new Kuga last year (The Gremlin February 4):  a large trapezoidal grille with angular headlamps including LED daytime running lights on the Trend and the Titanium.  The sculpted bonnet has a central bulge, and says Ford, the angular fog-light housings that “complete the three-quarter profile was inspired by the straps of a rucksack and designed to reflect an adventurous character”. Personally, I didn’t see that it looked like the straps of anything. The rear bumper and tail-light have also been revised and the Titanium has 17-inch rims. And instead of Ford’s Powershift the EcoSport with its turbopetrol engine is equipped with the latest generation six speed automatic gearbox: it is a  torque converter which sends engine output to the transmission. It does this by transmitting fluid from the converter to the automatic transmission. The gear changes were seamless and you can use the paddle shifts on the steering column if you want to get more involved in the driving. But I preferred to relax and let the autobox do the work and it proved its worth in some heavy traffic I encountered.

But back to the cabin which in the previous generation was so-so with hard and cheap-looking plastic fittings. Now it’s a whole lot more luxurious. The Titanium has full leather seats which have also been redesigned for comfort and it also features Ford’s much vaunted SYNC®3 communications and entertainment system which incorporates Bluetooth and Voice Control. It has a new floating eight inch full colour touchscreen in the top specced model.

You don’t need a university degree in rocket science to operate it. Just swipe. The few buttons that are there, are all ergonomically sited. A useful feature on the Titanium is the speed limiter.

The centre console features a built-in sliding top with an integrated storage compartment where you can keep your tablet, or snacks,  for when you’re peckish. In Titanium guise there is storage space underneath the front passenger seat. Talking of space the boot has a capacity of 280 litres expanding to 1 032 litres with the 60-40 split. The boot has a height adjustable floor and its sturdy honeycomb construction means it can carry loads of up to 300kg.

I am used to a tailgate that swings up so it was a bit of a surprise when I realised that the EcoSport has a side-hinged loading door (always read the manual) that swings to the left when you open it. The spare wheel tacked on to the tailgate may be a problem when you’re trying to park in a tight space although there are parking sensors all round.   But apart from that minor gripe it’s easy to negotiate the subcompact SUV through the city streets.

How does it drive? My test route took in the open road; twisting mountain passes; some gravel and over road construction with its accompanying imperfections; up and down dale and the  EcoSport didn’t disappoint. The ride was comfortable and thanks to a few tweaks on the suspension the ride was soft and it sailed over the bumps like a Hovercraft. The steering was light and responsive and round the bends there was little or no body roll, and there were no intrusive road noises in the cabin. The EcoSport is relaxing and entertaining to drive, in the city or on the open road. One thing though, it is not meant for bundu-bashing. In a sea of bland and ordinariness at the parking lot of your shopping mall the EcoSport will stand out from the crowd.  Especially if its clad in the Metallic Blue Lightning.

Fuel consumption is always controversial. Ford claims that the EcoSport uses 5.7litres/100km. But that’s in a perfect world and probably under laboratory conditions.  My figures in a town and country cycle were closer to 7.5litres/100km. At a pinch you could bring it down to slightly under 7litres/100km; that’s if you drive like Great Aunt Matilda. The Ford EcoSport 1 litre Titanium auto is bound to make inroads in its segment.

It’s practical, fun to drive and stylish to boot.