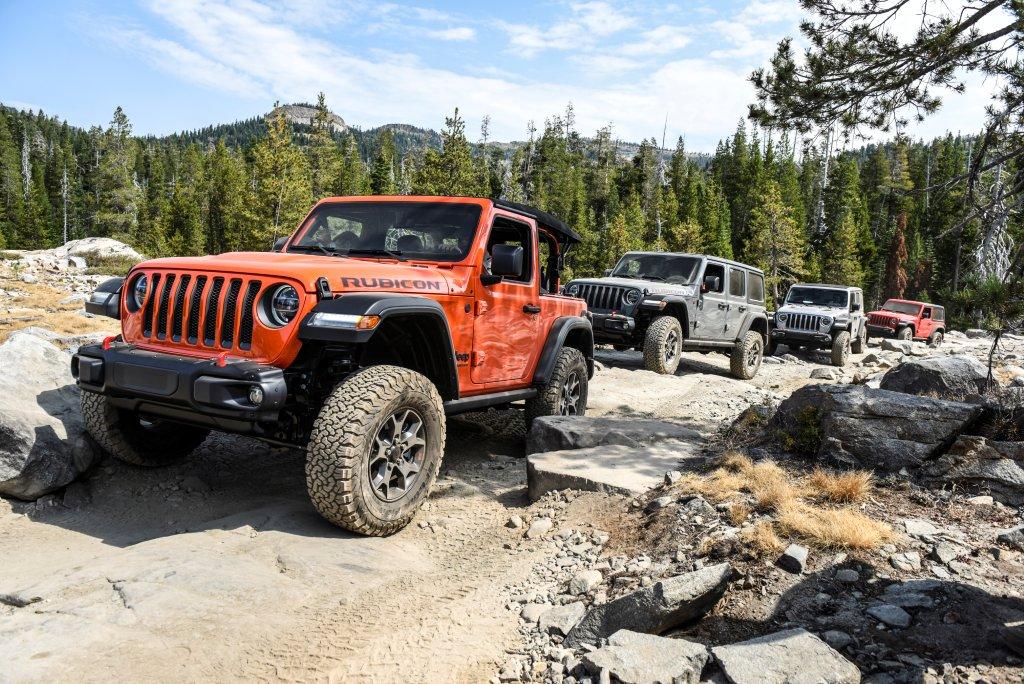 Brian Joss – The all-new JeepR Wrangler – the most capable Wrangler yet – has been put to the test in a way that truly commemorates its legendary status in off-road circles.

To celebrate the introduction of the all-new fourth generation, the iconic Jeep Wrangler was taken to the test on the challenging Rubicon Trail in the mountains between California and Nevada, USA. At the end of August, a convoy of Wrangler vehicles, all in the off-road specialist Rubicon trim, the most capable for off-road driving, set off on the legendary track located west of Lake Tahoe.

The unstoppable Rubicon was perfectly at ease on the extremely hard trail, which winds up rocks, slopes and plateaus, climbing over natural obstacles, courtesy of its unmatched off-road equipment. Each model was equipped with the Rock-Trac 4×4 system, featuring a two-speed transfer case with 4.0:1 low-range gear ratio, front and rear heavy-duty next-generation Dana 44 axles, Tru-Lok electric front- and rear-axle lockers to tackle the most extreme off-road sections and electronic sway-bar disconnect which allows drivers to disconnect the front sway bar to deliver additional wheel travel for traversing the toughest trails.

Powered by the new 2.0-litre petrol turbo and the powerful 3.6-litre petrol engine, the Rubicon models engaged in this unique adventure exploited their ground clearance of over 25 centimetres and leading  angles, including a 36.4-degree approach angle, a 25.8-degree breakover angle and a 30.8-degree departure angle. In addition, they benefited from a maximum crawl ratio of 77.2:1 (on petrol versions) and up to 76 cm of water fording.

The Rubicon Trail is one of the world’s most challenging trails  – rated a 10 for “most difficult” on a scale of 1 to 10 – and is known as the “granddaddy of all off-highway trails.” In 2003 the trail inspired the name of the Rubicon trim, the most capable off-road vehicle in the Wrangler range.

For these characteristics, the history of the Jeep brand is linked in a special way to this track, arguably one of the most famous off-road trails in the world.

It was in 1953, when a group of approximately 150 friends took their Jeep vehicles across the rough granite path through the Sierra Nevada Mountains on their way to Lake Tahoe.

The trek, originally conceived as a way to support the economy of the local community, was to become the first official Jeep crossing of the Rubicon Trail precisely at that moment when Jeep vehicles were making the shift from being working vehicles to becoming partners for personal adventures of discovery. It was the first-ever “Jeep Jamboree”, the most classic of all American meetings, created to savour the excitement that everyone feels when joining the big Jeep family.

The Rubicon Trail is a 35-kilometre route, part road and part 4×4 trail. The maintained portion of the route is called the McKinney-Rubicon Springs Road and begins in Georgetown, California, a hamlet in the state’s Gold Country.

Operating from 1890 to 1920, the McKinney-Rubicon Springs Road was originally established for stagecoaches to access resort hotels at Wentworth Springs and Rubicon Springs. The trailhead for the unmaintained portion of the route (which is about 19 kilometres long) begins in a location adjacent to Loon Lake and passes in part through the El Dorado National Forest.

Rambling over large boulders, rocky terrain and enormous granite slabs with steep inclines and sharp drops,  the trail ends in South Lake Tahoe. The trail crosses a river at one point close to Lake Tahoe. Early settlers named the river “Rubicon” after its counterpart in Italy – a small river north of Rome that Julius Caesar fatefully crossed in 49 BC.

Drawing upon that history, the term “Rubicon” now means “a limit that, when passed or exceeded, permits no return and typically results in irrevocable commitment.”

Since 1950, the Rubicon Trail has been used by off-road enthusiasts as the ideal location for exciting off-highway adventured in Jeep vehicles.

Furthermore, for over four decades, the Rubicon Trail has also been used by Jeep engineering teams to improve the off-road capability of Jeep SUVs and to aid in the development of new models and technologies. Using trails like the Rubicon has led to developing important innovations, such as Rock-TracR 4:1 transfer case, Quadra-Drive IIR, Tru-LokR locking axle differentials, disconnecting front sway bar, underbody skid-plate protection, front Dana 44 axle, multi-link suspension, BLD (Brake Lock Differential on the new Wrangler generation) and steel front and rear bumpers on the Rubicon trim level.

Introduced in September across main European markets, the new Jeep Wrangler – the fourth generation of most capable off-road vehicle – perfectly embodies the “Go Anywhere, Do Anything”  claim of the Jeep brand. The new Wrangler is reasserting its position as an undisputed off-road champion while showing it is just as at ease on everyday city streets, with its excellent comfort and state-of-the-art technology. The end result is the most capable off-road Wrangler yet, thanks to its two advanced four-wheel drive systems (Command-Trac and Rock-Trac), Tru-Lock electric front- and rear-axle lockers, Trac-Lok limited-slip differential and electronic front sway-bar disconnect. The engine range of the new Wrangler has been renewed with the introduction of a 2.2-litre turbo diesel and a 2.0-litre petrol engine. Both new engines are paired with the eight-speed automatic transmission, a first for Wrangler.