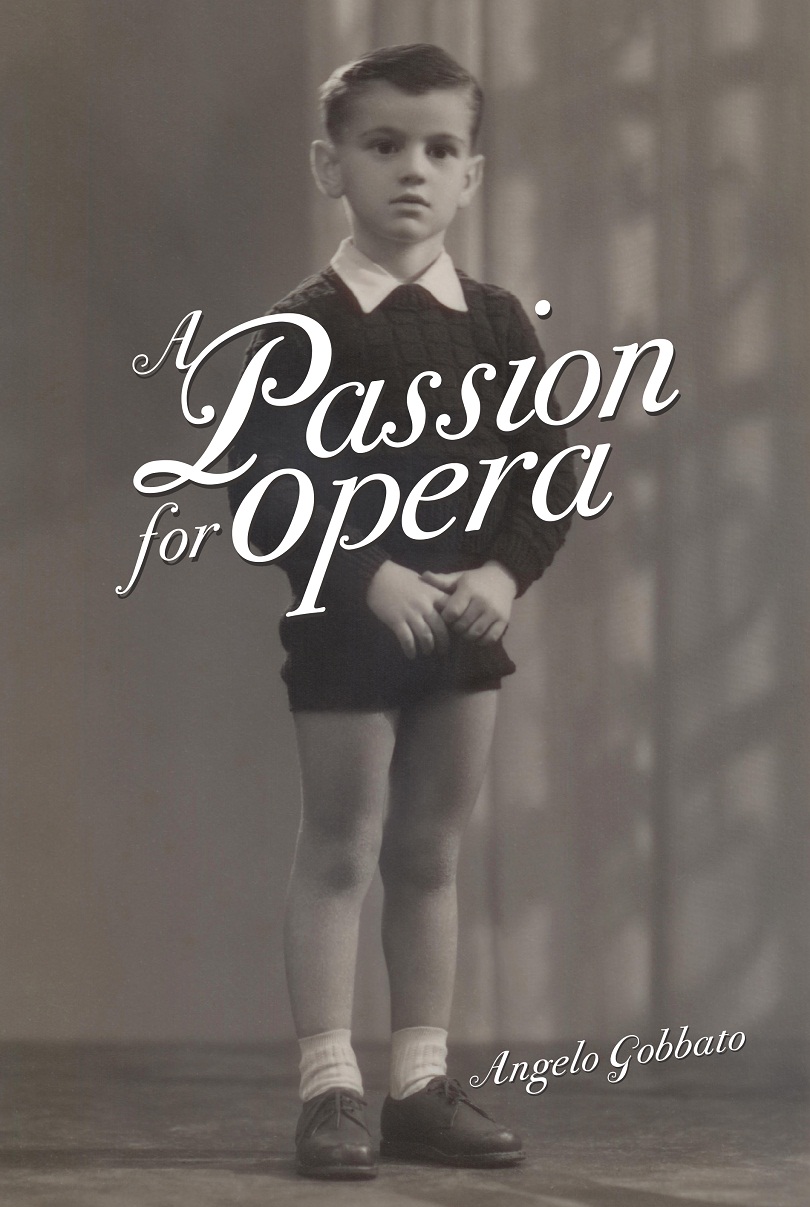 Disparagingly, Bellville in Cape Town’s northern suburbs, is often described as being behind the “boerewors curtain”, apparently, because nothing good happens there or comes from there. However, there is Angelo Gobbato.

Even if you only have a passing interest in music and opera, the name Angelo Gobbato will ring a few bells. In fact in Cape Town Gobbato and opera are synonymous.

Strictly speaking he was born in Milan in 1943 and arrived in Cape Town at the age of seven when his father, Giuseppe, was the head of an engineering department at Milan’s Isotta Fraschini , a firm that manufactured “luxury” motorcars and, at that time, aircraft engines. But he was also a marathon walker and won many gold medals in Italy, as well as in London, Paris and at the 1936 Berlin Olympic Games.

Gobbato senior was not called up to fight in the Second World War as his work at the Isotta Fraschini factory was considered too important. However, things changed after Mussolini was executed by partisans and strung up in Piazzale Loreto in April 1945. At a gathering, Giuseppe voiced his concerns to a family friend, the industrialist, Meneghini, who said that Braibanti, a firm that manufactured pasta-making machines, was looking for a technician to supervise the installation of some of their machines in the Fatti’s and Moni’s factory at  Bellville, near Cape Town, in South Africa. “Dad was somewhat sceptical about his suitability for the work, but he was eventually persuaded that someone skilled in dealing with aircraft engines would hardly find pasta machines too problematic.”

And as they say the rest is history, and an illustrious history at that.

Gobbato has mentored many opera stars among them Pretty Yende. In fact in the prologue to his memoir, A Passion For Opera, he writes that his mind is full of Pretty Yende as he recalls her Metropolitan debut in Lucia in April this year. She made an equally triumphant debut at the Met in New York as Adele in Le Comte Ory in 2013 and Gobbato was at both performances. Gobbato said he “had the privilege of teaching her, directing her and generally moulding her unique talent”.

In 1976, Gobbato became the resident producer at the old Nico Malan Opera House when the apartheid regime’s policies didn’t give black singers the same opportunities as white singers. It was at the height of apartheid and the beginning of the end. And it was not only singers that were denied opportunities under the jackboot of the Nationalist government.

However, when he became head of the Opera School at UCT in 1982, Gobbato was able to train and encourage a generation of black singers, some of whom have gone on to great roles overseas and in South Africa.

Gobbato had his first taste of the government’s twisted logic on one of Capab’s first operatic tours to the platteland. The company was scheduled to perform in “the brand-new church hall of a town that shall remain nameless”. Gobbato had barely sat down to lunch when the stage director approached him and asked him to  join him at the church hall. “There I found that the caretaker had locked all the doors and forbidden any of the non-white crew to sully the purity of the new hall. It took an urgent appeal to the dominee to convince him that there would be no ‘konsert’ that night unless the crew was permitted to get on with their work. Permission for them to do so was at last reluctantly given, with the strict proviso that no non-whites would be permitted to use any of the toilet or washroom facilities. To ensure that it could not be said that non-white audiences were totally excluded, one or two performances per tour were earmarked to be given in special venues that admitted only coloureds”.

It’s no surprise then that the special performances were not well attended and in any event the audiences were aggressive and noisy with booing and walking out at the interval.

In 1970 plans were announced to build a new Nico Malan but it was funded by the Cape provincial administration, and thus had to comply with apartheid laws that unhesitatingly designated it as a ‘whites only’ building. “This decision was strongly contested by some members of the Provincial Board and the Capab Board, but they were in effect told that any public fuss might well result in funding being withdrawn. It was also argued that since the theatre complex was in effect being leased to Capab, it was up to Capab to apply for the necessary permits to allow ‘non-whites’ to attend special performances but they refused. On opening night students held a peaceful demonstration handing out leaflets decrying segregation outside a model of the new Nico while the Black Sash, holding placards, held a protest in Lower Burg Street”. “Although all this was to change with time, there are still people in Cape Town who have not set foot in what is now the Artscape Theatre Complex because of this original sin,” Gobbato writes.

Reportedly, Gobbato’s love affair with music started before the age of three, according to his grandmother, who said he began intoning his version of Puccini’s La Bohème by bawling ‘Mi son gelato la manina’ (I have frozen my little hand). “Of course, Rodolfo actually sings ‘Che gelida manina’ (How ice-cold is your little hand) to the beautiful Mimì, whom he has just met, but what does a three-year-old know of romantic passion and correct grammar? It was the music that mattered.”

However, music is ingrained in the family’s genes. His paternal great-grandfather, Giuseppe, one of Garibaldi’s Redshirts, and an operatic  baritone once performed for the Tsar. Gobbato’s mother, an embroiderer, also had a good voice. Another relative was a flautist of some renown. His maternal grandfather (and his namesake),  Angelo Meazza, was renowned for his great sense of humour, and frequently entertained his friends with renditions of comic theatrical sketches such as ‘Il sciur pastissa’ and ‘Tecoppa’ – then made famous by the great Milanese actor Edoardo Ferravilla – and by performing songs in Milanese dialect. So one can truthfully say it’s in the genes.

The Opera School at the University of Cape Town’s South African College of Music (SACM) was run by the formidable team of Gregorio Fiasconaro (an Italian prisoner of war who had decided to remain in South Africa) as the leading baritone and the operatic stage director and Eric Chisholm  as Director of the SACM and Conductor. Incidentally it is Erik (with a k, not a C). A colleague and friend, journalist Fiona Chisholm, was Erik’s daughter. She spent a great deal of time travelling with him to Northern Rhodesia (twice) with the College of Music opera company and twice to the UK by ship. “My mother had to stay at home as she had a full time job,” Fiona recalled. “Dad thought the only things worth buying were books, records (LPs) and musical scores. Sadly he died very young at 61. He burnt himself out. Never able to sleep. Always working on his own compositions or scores for operas to be performed. He was terribly restless, could not sit down or relax for a moment.  During the war years he was away in Singapore and India conducting orchestras to entertain the troops and rarely was at home with my mother and my two sisters, Sheila (on FMR) and Morag ( a medical doctor) in Glasgow,” she said.

Joseph Manca, another  Italian prisoner of war who stayed in South Africa, married a Cape coloured woman before the apartheid government declared mixed marriages illegal. Manca though, discovered an abundance of “extraordinary operatic voices among musically untrained individuals who generally held extremely humble jobs”. “With the creation of Eoan Group, we were treated to many exciting seasons of Italian opera at the City Hall (chosen because of the possibility of seating white’ and ‘non-white’ audiences without contravening government regulations) under his baton,” writes Gobbato who says the strongest influence on “my early operatic development came from watching Mario Lanza in The Great Caruso in 1951 at the Bellville bioscope”.

But he always had a passion for opera and when South Africa was a Union it was one of the ports of call for theatrical and musical tours organized by British companies, among them, the Carl Rosa Company, which brought imported operatic productions to Cape Town, which were generally performed at the newly built Alhambra Theatre. But when the United Party led by Jan Smuts was defeated in the whites-only election by DF Malan’s National Party, which opened the door to apartheid,  African Consolidated Theatres mounted seasons of mainly  Italian operas with mostly Italian singers and conductors, such as Virginia Zeani, Luigi Infantino, Tito Gobbi, Alvinio Misciano, Gigliola Frazzoni and Francesco Patané.

Gobbato’s parents took him to most of these productions and they regularly invited singers to their 31 Durban Road home for some almost-home-made pasta (the factory was next door) and Gobbato recalls convivial meals and then joining these professional singers in popular Italian songs. He still has many of the autographed photos they left him.

He also graduated with a BSc (hons) from the University of Cape Town (1960-1965) and won the Class medal. Although he did put his degree to use for a short while, science’s loss was music’s gain.

Gobbato’s life was not without its low notes.

Arriving at OR Tambo International  from Providence his ankle got caught in the steel teeth of the escalator when his suitcase toppled over from the vibration and trapped his leg. Later it transpired that his Achilles Tendon had snapped and it had “to be welded” back. While in America one year he became extremely ill and doctors found he had worms that came from eating a persimmon; one Christmas season, as was tradition, he was preparing for the midnight feast on St Sylvester (December 31) at his Upper Orange Street home.  After getting the patio ready for the dinner, he settled at his computer to do some work when two men accosted him, tied him up and searched his flat. The men were arrested in Khayelitsha and police recovered most of the stolen items except for  a valuable gold chain, a gold watch and two unopened bottles of perfume, which had been sold to a vendor at Cape Town railway station.

If you have been living in Lotus Land and you don’t know who Angelo Gobbato is, he was the director of the Opera School at the South African College of Music at UCT; he was resident opera producer for Capab at the then Nico Malan before taking over as director of the opera school; in 1989 he went back to Capab as artistic director when the opera department became Cape Town Opera in 1999, until he retired in 2008, although he still does freelance work.

At the age of 70 and with his passion undimmed he flew to New York to witness his “beloved Pretty Yende” make another dazzling debut at the Metropolitan Opera House, descending the infamous spiral staircase and singing the famous Mad Scene from Lucia di Lammermoor.

A Passion For Opera is a fascinating look at one man’s life and his love for music. It’s also a history of opera in South Africa and it deserves a place on your bookshelf. Historic black and white images of the who’s who in opera, and sketches of the famous opera houses of the world, add interest to this lively and captivating memoir.