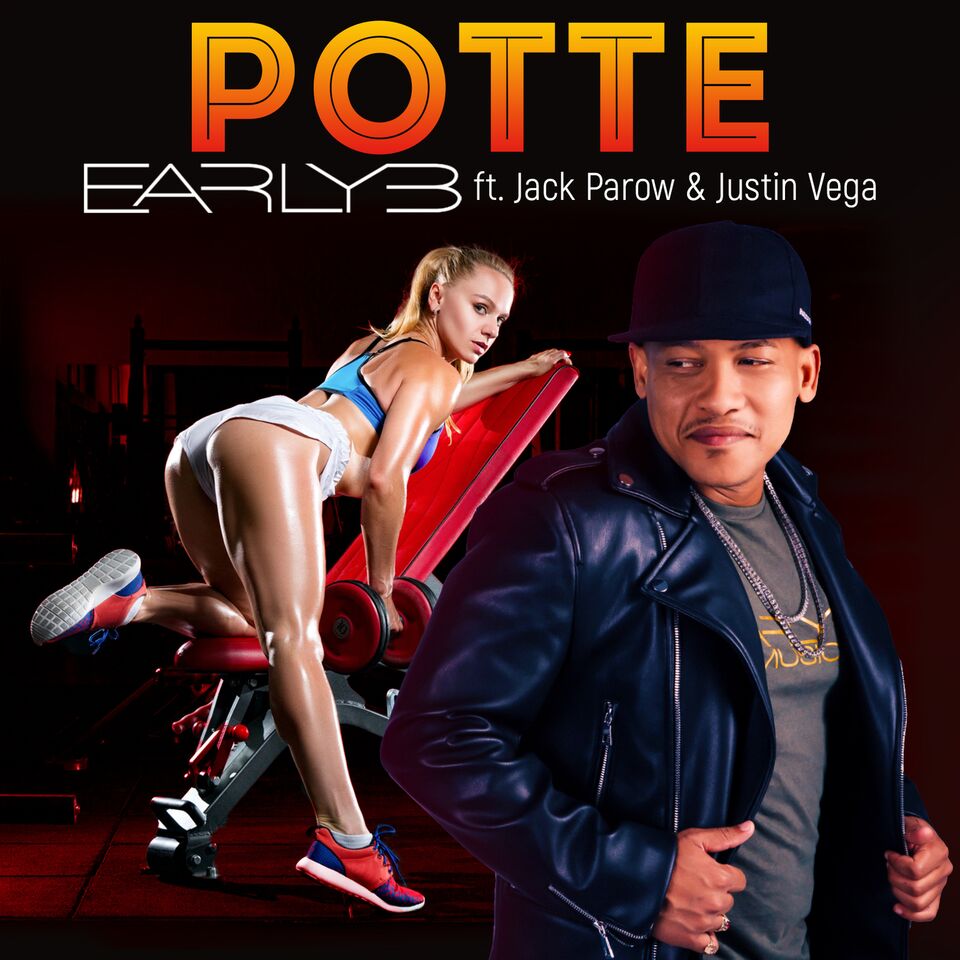 Popular acclaimed Hip Hop artist from Port Elizabeth, Early B, has made big waves in the music industry over the past few months with his witty lyrics and music, which delivered quite a few radio hits including his most recent success story, Ben Ten.

This single did not only feature on the charts of various big radio stations, but its hilarious music video has also had more than 250 000 views on YouTube.

Now the talented musician is back with a brand new single, which promises to be even better than the rest! POTTE, a collaboration with award-winning rap legend Jack Parow and producer Justin Vega, is an insane combination of Rap lyrics and Club beats that will inspire your body to move and your lips to sing along.

“It is actually just a fun song. I like to imitate people and PE, when guys see a girls with a great body, they say it exactly like I sing it in the chorus: ‘Daai kind het potte, whuh’. It has become such a popular saying in the area that even children use it,” explains B. “I wanted to do something light and refreshing with the awesome beat that Justin created. Everyone needs to cut lose sometimes and have a good laugh. There are very serious songs on my new album and we needed to establish an equilibrium by adding some more upbeat tracks.”

According to the musician, he and Jack Parow each wrote the lyrics their parts in the song, which challenged them both to step out of their comfort zones and they enjoyed working on this project a lot.  About the opportunity to work with big names like Jack Parow and Justin Vega, he says: “Jack Parow is someone I have always admired. His creativity is incredible and he is a wonderful business man. We have made music together before and worked together well. I met Justin at an Emo Adams show and we immediately hit it off. I invited him for a braai and he played me some of his beats. When I heard this one, it stuck with me. He truly produces rhythms that are of international standard. The rest is history.”

A fun, tongue-in-cheek music video will be filmed in Port Elizabeth by Slice of Life Productions, with whom Early B has worked with before. “We plan to start shooting in November and to release the video in December, because it has such a nice holiday vibe. My music is different and I felt that the video should highlight that and we, therefore, decided not to use well-known locations as background for this story,” he reveals.

Early B, aka Earl Swartz, is a versatile rapper known for his witty sense of humour and heartfelt social commentary. The artist (29) has become a regular performer at some of the country’s biggest festivals and concerts, over the past nine years, including the KKNK. As an actor, he also made appearances in local series, such as Hotel Songololo en Kniediep in Kookwater. He is best-known for his hit, Cerebellum, for which he received a Ghoema Music Award for Best Hip Hop Song in 2017. The song also peaked at number 1 on the Hip Hop charts of various big radio stations.

Multi award-winning rapper and songwriter, Jack Parow (aka Zander Tyler), shot to fame in 2009 after releasing his debut hit single, Cooler as Ekke, which took the country’s music industry by storm.

He has had various successful albums and hits, won several coveted music awards and recently also launched his own brandy label, Parow Brandy.

Justin Vega is a DJ and music producer from the Cape, who shares his passion for music with the world by combining different beats and genres in a new and refreshing way. He is a seasoned musician and Jazz enthusiast who is equally comfortable behind the piano and drums as he is behind the mixer and computer.

POTTE, a track taken from Early B’s debut album, Aangename Kennis, which was released in August 2018, has already been very well received by the public. “It received a “favourite star” on iTunes within the first few weeks, which means that listeners like it and tend to listen to it more than some of the other songs. I am literally tagged in about three videos per day on social media where fans are busy dancing or singing along to the song, which is exactly what I have wanted,” he says proudly. “My mom might find it a bit weird, by I believe that song is the perfect release for this time of year and that younger listeners will also be able to enjoy it,” he adds.

The album is currently available at Musica as well as on iTunes, Google Play, Joox, Spotify and Tidal.