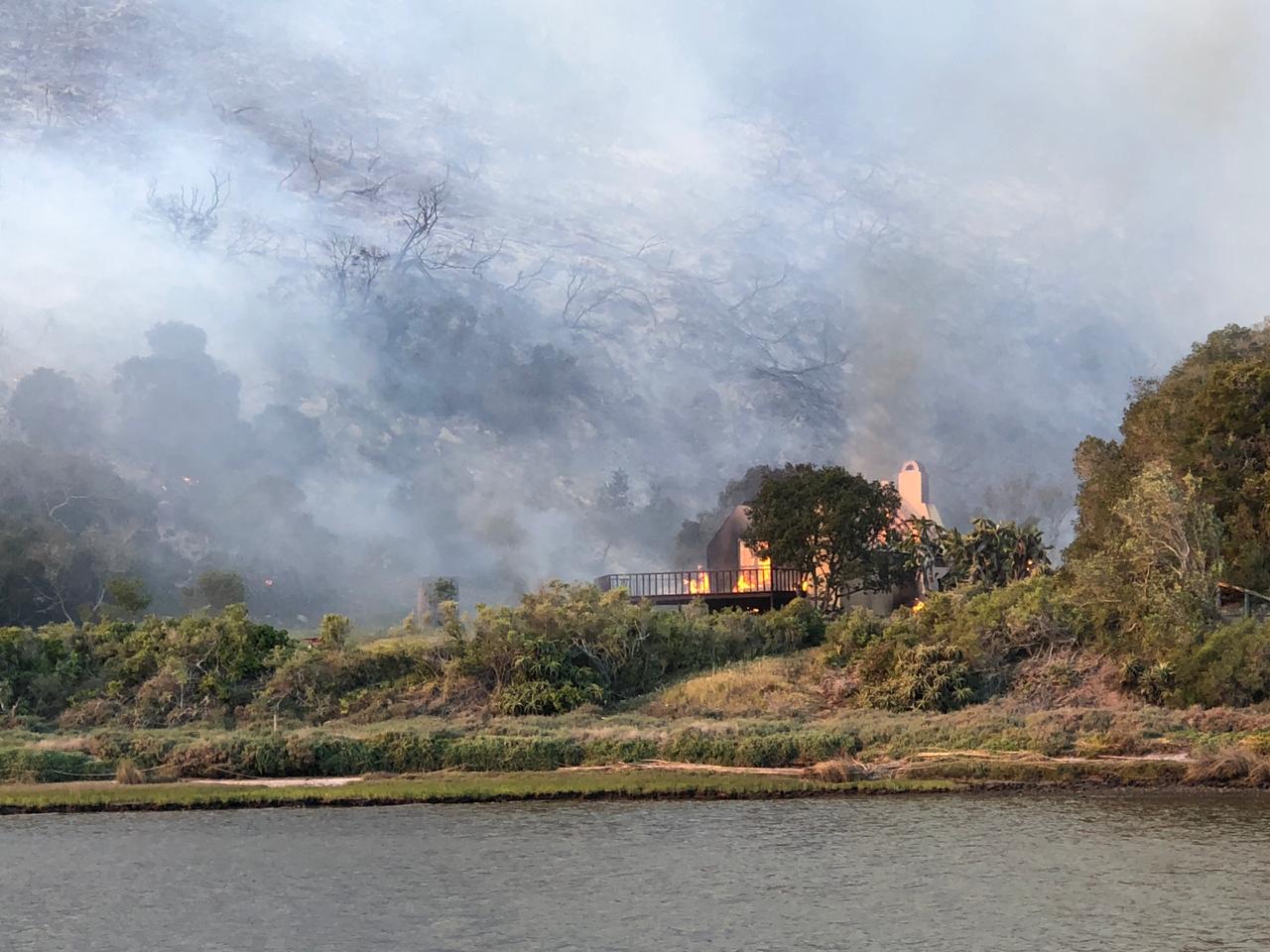 Currently, there are several wildfires in the Hessequa, specifically in the Vermaaklikheid and Puntjie areas. Other than the Vermaaklikheid fire, most of the wildfires are contained. This is due to a mammoth effort from all fire services and their partners, including Cape Nature the South Cape Fire Protection Agency (SCFPA) and WoF.

The status as at 17:00: The Vermaaklikheid fire is still not contained. A change in wind direction at 14:30 complicated fire-fighting efforts. Between 12:00 and 16:00 when the temperatures are at its highest, new problems are always expected to arise – and so it did.

Priority for all teams is to protect infrastructure and homes, including the Vermaaklikheid and Puntjie villages. At the moment all the fire lines in the Puntjie area are contained – there is a high density of homes in that area. Tonight and tomorrow morning we will attack the wildfire head-on. We cannot risk the lives of fire fighters in these conditions.

A South African Air Force Oryx will be up on first light, with the assistance of the Minister of Local Government and the Western Cape Provincial Disaster Management Centre. In addition to this WOF will dispatch a Huey helicopter from Ugie as well as two fixed-wing bombers from Nelspruit first light tomorrow morning to assist with aerial firefighting operations.

The objectives of the Incident Management Team are to protect the lives of community members, firefighters and to limit the economic impact of this wildfire.

The weather forecast for tomorrow is similar to that of today, thus we expect the same challenges faced today.

– Loss of human life (1 person died when a WoF helicopter went down around 09:45 this morning. Contact WoF for more information).

If any person from the public would like to donate non-perishable food to the fire fighters, please contact Anna Philander on 065 397 3709. Please note this area is extremely dangerous and we request that those planning to donate anything would need to contact Ms Philander or drop off donations at the Hessequa fire station.

Both flanks are burning either side of the Duiwenhoks river.

The Western flank is currently contained and mopping up is being conducted by local volunteers and Enviro Volunteer Wildfire Services.

The Eastern flank is the main concern and primary objective.

Fire fighters as well as aerial resources are fighting this fire line of some 3,5km and trying to prevent it from jumping the Puintjie / Blombos road.

Weather conditions:
A heat wave is moving through the Hessequa area at 33°C. Wind speed is at 26km/h

Services include the SCFPA Management team involved in ground operations and IMT. Hessequa Mun Fire, George Mun Fire, GRDM Fire. SCFPA resources also include some 32 Working on Fire fire fighters from Riversdale as well as a Huey helicopter and a Spotter aircraft. Weather conditions are unfavourable with a max temp of 38 and a predominant NW wind. The SCFPA would like to thank the local Vermaaklikheid community for their support, food and much needed cold water. 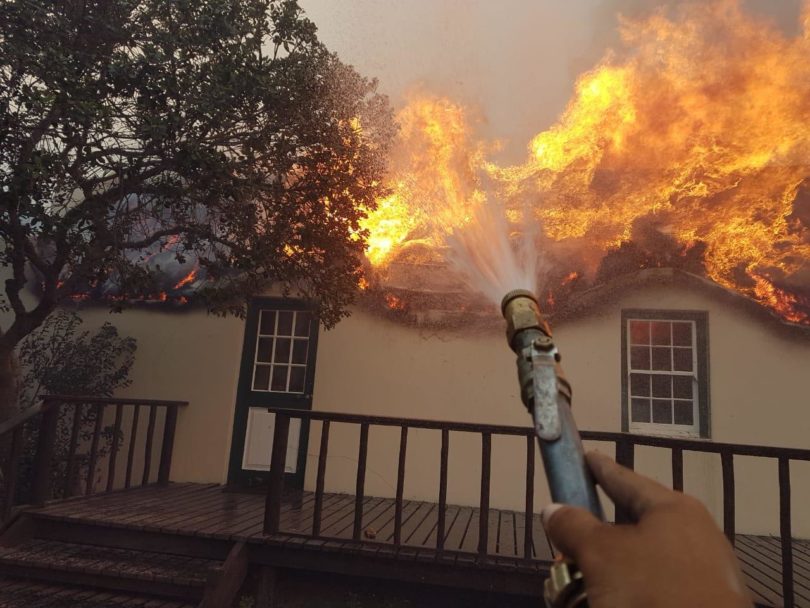 PLANNED ACTIONS:
Protection of structures
Backburn was conducted on the Eastern flank. Backburn was contained and crews will monitor start with mopping up.
Western flank is secure and will be monitored.

RISKS
– Infrastructure:
Should the weather conditions change approximately 100 houses in danger at Puntjie and Basjans Bay

– Evacuations:
None at this stage

– People:
None at this stage all communities are fully aware of the situation

AERIAL RESOURCES:
All aerial resources were grounded at last light.
1 x Private Chopper from Kobus Crouse and
1 x Spotter and 1 x Chopper from WOF on standby and available at first light

Western flank on the western side of the river is running west with a strong wind behind it – choppers are bombing this fire.

Another chopper is bombing the eastern flank of the fire at Duivenhoks River. WoF ground teams are active here.

RISKS
– Infrastructure:
Seven homes have been lost in fires since yesterday. One thatch roof house bombed moments ago and saved near the Duivenhoks River.

– Evacuations:
– People:
No loss of life, but a wife and her two children were evacuated at one home, while the father stayed behind to protect their property.

The GRDM Fire and Rescue team in Riversdale, at 3 pm yesterday, responded to a fire in the Vermaaklikheid area between Riversdale and Heidelberg.  By 4 pm they requested assistance from George.  Three thatched houses have been destroyed.  By 6 am the fire was heading towards Heidelberg.  Backburns are being prepared, but the fire is still out of control.

The fire was reported at GR Control Centre at 15:05 where Hessequa requested assistance from GRDM Fire and Rescue.

At 16:00 Riversdale requested assistance from the George team due to the fire being out of control and 8 houses directly in harm’s way.

At 17:21 it was reported that the first thatch house was completely destroyed.

Aerial support was requested at approximately 18:15 but due to time of day and last light, this was not possible.

At 21:54 it was reported that two more houses was completely destroyed.

At 22:45 it was reported that firefighting teams managed to save 2 houses, the fire is still out of control.

PLANNED ACTIONS:
Stop and Extinguish head of fire and mop up of tail and flanks

Fire active south south east of Duivenhoksriver on a backburn

AERIAL RESOURCES:
To be deployed at first light.