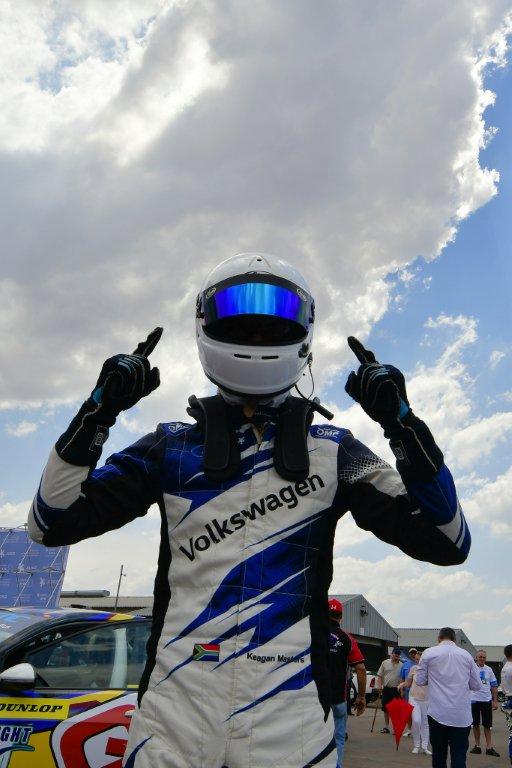 Brian Joss – Volkswagen Motorsport had much to celebrate after the ninth and final round of the Sasol GTC Championship at Zwartkops on Saturday.

Keagan Masters wrapped up the GTC2 Championship in the first race of the day after powering his Volkswagen Advanced Driving Golf GTi to a hard fought win, his eleventh victory this season and Volkswagen’s third consecutive championship in the category.

The champion-elect qualified his Golf GTi nearly half a second quicker than his nearest competitor. In the opening heat, Masters battled to get his tyres up to the optimum operating temperature and fell behind Devin Robertson (Mini) for the opening five laps. Once his tyres offered up the grip he needed, he took the lead and romped to an easy 0.76 second victory to seal his second consecutive GTC2 title.

“It feels great to put the championship to bed with another win. My car has been incredible all season which is testament to the Golf GTi’s design and impeccable preparation by the Volkswagen Motorsport team,” said Masters.

GTC2 victory in the last race of the season, having started from pole position. Wood finished fifth in his first year in the championship, one point away from fourth.

“It’s a brilliant way to end the season,” said Wood. “Someone knocked me hard from behind going into turn two which caused a bad vibration, but I put my head down and concentrated on getting every corner and braking zone absolutely perfect.”

Daniel Rowe top-scored for the Volkswagen Jetta GTC team, ending his season with a hard-won podium place in the final race; Mathew Hodges bagged a pair of fifthplace finishes to add 20 points to his year’s tally.

With Hodges and Rowe ending the opening 12-lap race in fifth and sixth position, the scene was set for a humdinger race two with the Jetta GTC pair lining up in second and third place on the inverted grid.

Daniel was in the thick of the action, racing hard with Robert Wolk (BMW) and Simon Moss (Audi). The trio swapped positions by the lap until the final tour; Wolk tried an optimistic move on Rowe and the cars touched, sending the BMW driver into the gravel trap while Rowe motored on to take third at the flag.

Volkswagen’s Head of Motorsport, Mike Rowe summed up his season: “Keagan produced another polished performance and thoroughly deserves his championship. Adrian has improved in leaps and bounds since August and his first win was never in doubt.”

“The Jetta GTC team made significant progress this year as Daniel’s three wins showed. We will be back competing against the best teams and drivers next year. None of our success would have been possible without the dedication and hard work by everyone at Nathan’s Motorsport,” concluded Rowe.