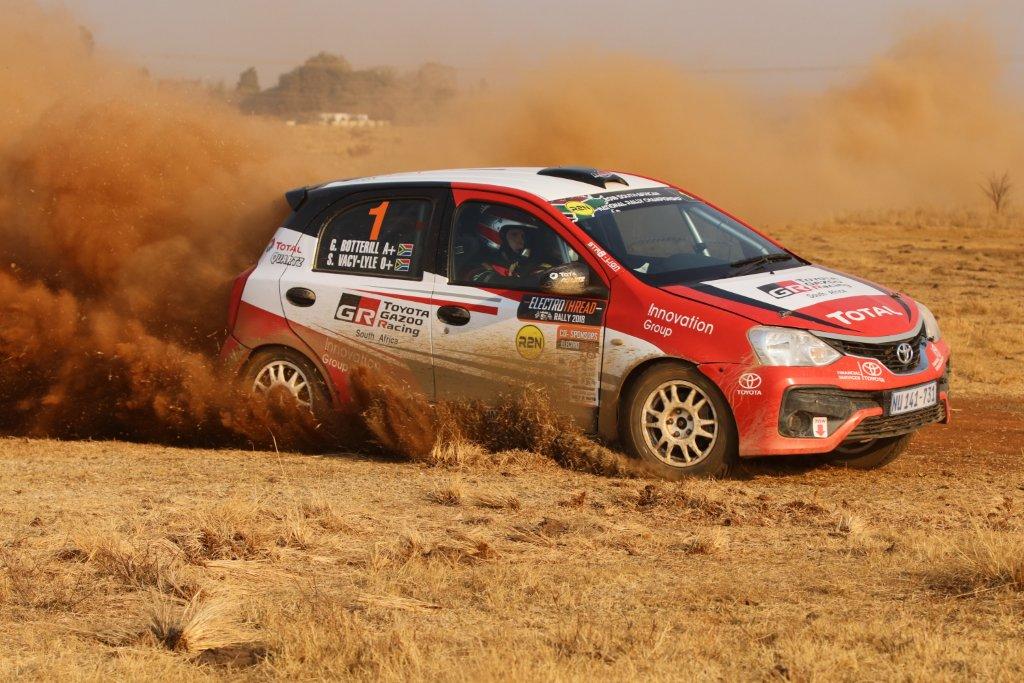 Brian Joss – It will be an all-out final battle between Toyota and Volkswagen crews when all eyes  will be on the two front-running crews of the 2018 SA National Rally Championship, after an unexpected setback in last month’s Secunda rally, the penultimate round for the Toyota Gazoo Racing SA Class R2N Toyota Etios crew Guy Botterill and Simon Vacy-Lyle. They hope to make up for the disaster  at the Ermelo Rally which starts this Friday, October 26.

Botterill/Vacy-Lyle have won four of the six rounds on the trot in the 2018 SA National Rally Championship, but missed an opportunity to clinch the championship in the previous event, the Lake Umuzi Secunda Rally in September, that would have taken them into an insurmountable lead into the last round.

“However, lady luck turned against us and it was not to be,” remembers Guy Botterill, who only needed to finish ahead of AC Potgieter (Volkswagen Polo) to take the title.

“It all went wrong on Stage 10. We were on a second run through the section known as Tjorrie, with a lead of 2.2 seconds over Potgieter, and approached a small bank on the inside of a corner on the same line we used in the previous run.”

But then the championship came crumbling around them.

“We’re not entirely sure what happened,” recalls Botterill. “We hit the bank in exactly the same spot as before, but this time it kicked the car up violently and we rolled over, ending our race. Maybe the angle was slightly different, but both Simon and I were caught out by how much the car reacted to the small bank.”

The crew emerged unscathed from the car, and even though they were forced to retire from the event, the damage to the Toyota Etios was largely cosmetic.

The mishap allowed Potgieter, their closest competitor, to take the win.

Toyota Gazoo Racing SA team manager Glyn Hall says the championship counts over only six of the seven rounds and the crews must drop their worst score.

After the dropped points, Botterill’s score remains 64 points, as his worst score on an event was a zero. “However, Potgieter had to drop 9 points, leaving them with tied at the top of the standings. This means we are going into the final round of the season tied on points. It certainly isn’t ideal for us, but it does make the championship interesting. Whoever wins this rally, wins the championship.”

The Toyota Etios has been repaired for this event as the rollover caused only minor cosmetic damage. “After replacing a few panels and spending some time in the repair shop, the Etios is as good as new and boasts a new paint job as well,” says Botterill.

For them the last event of the 2018 season is a make or break event, although they will tackle it with care. “The Ermelo Rally this weekend is a new event on the calendar, and even though we would like to perform well on this new route, an outright win is not as important as beating AC Potgieter, and this will be our aim. Beating them in any points position will seal the championship for us, making it five in a row – and nothing would please us more.”

The Ermelo Rally starts on Friday 26 October at the Ermelo Show Grounds with the first car off at 2pm for four gravel stages, completing the day after Stage 5 on tar around 6.30pm. The event restarts on 3.45pm