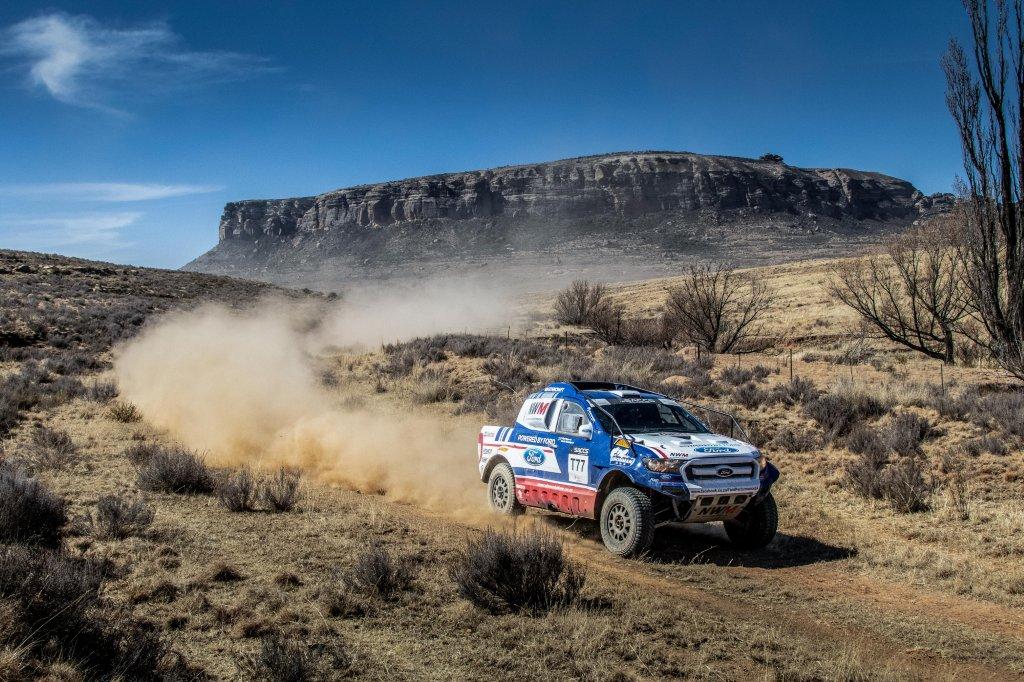 Brian Joss – For the third year in a row, the Class T Production Vehicle Championship will go down to the wire at the season finale in Gauteng, and the Ford Neil Woolridge Motorsport (NWM) crew of Lance Woolridge and Ward Huxtable are leading the fight for the prized title.

As the sixth and final round of the thrilling 2018 South African Cross Country Series (SACCS), it will be nail-biting affair when the teams descend on Glenharvie, Westonaria on Gauteng’s gold mining belt as they battle it out on the aptly named Gold 400 which takes place on 2 and 3 November.

Having won the two opening races this season, along with the first leg of the Botswana Desert Race, Woolridge and Huxtable lead the current standings on 120 points, with a nine-point margin over reigning Class T champions, Johan and Werner Horn (Toyota).

Gareth Woolridge and Boyd Dreyer, in the second NWM Ford Ranger, have clawed their way back into the fight after winning last time out in Harrismith.

They are currently 14 points adrift of their team-mates, and three points ahead of Gary Bertholdt and Geoff Minnitt in another Toyota. With 30 points up for grabs for a race win, 23 for the runners-up and 18 for third place, it’s all to play for in the thrilling duel that will decide who reigns supreme for 2018.

“Once again, the championship fight will continue right to the end, although for the first time in three years we have the advantage of leading the standings going into the final race,” says Neil Woolridge, NWM team principal. “It has been extremely frustrating losing the title by the narrowest of margins twice in a row, so we’re doing everything possible in preparation for the Gold 400 to make sure the Class T trophy comes home with us.

“Our NWM Ford Rangers have been fast and reliable all year, and victory in Harrismith last month has given the team added confidence. It’s going to be a tense race, but we’re hoping that it’s third time lucky for us this time around,” Woolridge adds.

The X-Rally Team of Marcos Baumgart and Kleber Cincea will return to the SACCS for the final round after missing the Harrismith 400 due to international racing commitments. With two podium finishes already in the bag this year, the Brazilians are keen to round off the season with another solid finish.

For the legions of motorsport fans in Gauteng, the action-packed Gold 400 will be located within easy reach of Johannesburg and Pretoria, and staged once again from the Kloof Recreation Club in Glenharvie.

The organisers have promised an exciting route that combines some of the familiar sections from recent events, along with new terrain that will spice up the action – all of which is easily accessible for spectators. Initially, the race route travels south around the mining operations of Sibanye Stilwater to the farming community of Kalbasfontein, before heading north through Jachtfontein and Waterpan back to Glenharvie.

Friday’s short qualifying race starts at 14:00 from the Kloof Recreation Club, while the main action commences at 08:00 on Saturday, featuring two loops of the race route separated by a 30-minute service interval and an autograph signing session.