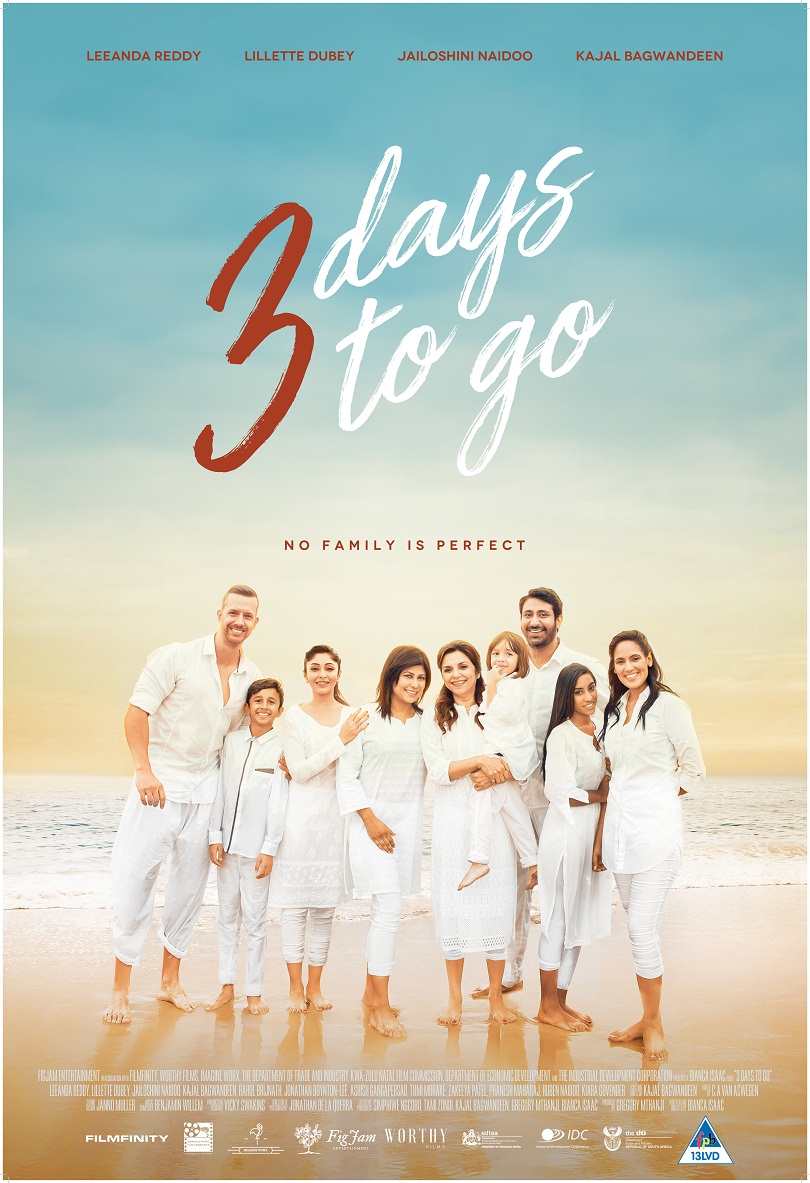 The wait is finally over! First-time director and award-winning producer, Bianca Isaac (Umilio, Swartwater, Kruispad and Getroud Met Rugby), and the team behind the brand new family comedy, 3 DAYS TO GO, are proud to announce the release of the film’s official trailer, which will provide a first glimpse into what can be expected from this heart-warming tale.

3 DAYS TO GO tells the story of adult siblings who, after the sudden death of their father, are forced to return to their childhood home – with an assortment of partners, children and issues in tow. They need to survive three days in each other’s company, under one roof, before they spread their father’s ashes and part ways, setting the stage for some hilariously funny moments and deeply touching ones.

“Audiences will thoroughly enjoy the family drama as they take this journey with us!

The family dynamics, politics and challenges…. The tension and irritations that arise from different personalities, each with their own issues, coming together in a confined environment, makes for an eventful ride which viewers are bound to identify with! Add to that a great crew and it’s a movie that will definitely capture your interest and attention!”, explains Jailoshini Naidoo, who can also be seen in one of the lead roles of the film.

Aside from a very experienced crew, this universal story of family, healing and forgiveness – written by Isaac – also boasts a strong and talented cast:

Bollywood actress Lillette Dubey (The Second-Best Marigold Hotel, Best Marigold Hotel, Monsoon Wedding, Kal Ho Naa Ho and Baghban), came to South Africa specifically to portray the role of matriarch Lakshmi Isaac, who loses her husband of 45 years unexpectedly. Dubey who visited the country for another role about fifteen years ago, admits that she loved being here while working on the film. “I think this is a film that will appeal to a very wide demographic and people of all generations. Moreover this movie is a wonderful mix of humour, drama, emotions, all closely packed over a span of three days. It is a tight script, with lots happening and enough variety to keep an audience completely engaged,” she says.

Leeanda Reddy (Isidingo, Mr. Bones 2) can be seen in the role of second-born, Janet, who was living with her parents at the time of her father’s death and has to juggle love, a rebelish teen and sibling tension, as well as coming to terms with her own sorrow.

“It was such a thrill to work alongside the awesome big cast and team of 3 DAYS TO GO. Every one of them is so accomplished and talented,” says Reddy about working with her fellow cast members.

Well-known radio, stage and television personality, Jailoshini Naidoo (Aunty Rumba, Keeping Up With The Kandasamys) is Melissa, the oldest of the four Isaac siblings, who is stuck in an emotionally and physically abusive marriage and Kajal Bagwandeen (Madiba, Impunity, JOZI, For Better or Worse, Bombay Duck) is Amy – the baby of the family who is on the brink of getting divorced and stands to lose everything. The only son and gambling addict of the family, Riki, is played by Rahul Brijnath (The Indian Detective).

“What an honour and privilege it was to be part of this film. To be surrounded by such talented and passionate people daily, reminded me constantly why I love this crazy industry so much. Why I choose to do this every day. It’s a beautiful process making a movie, and I know viewers will take away some kind of magic from this special story,” Boynton- Lee adds.

This film serves a slice of life and the story is applicable to any culture and race. It is about family, the choices we make and finding redemption. You may recognise someone you know in the story… or you may even recognise yourself.

3 DAYS TO GO was produced by FigJam Entertainment in association with the KZN Film Commission (KZNFC), the IDC the DTI and the KZN Department of Economic Development It is scheduled for release in cinemas nationwide on 25 January 2019 by Filmfinity (Pty) Ltd.