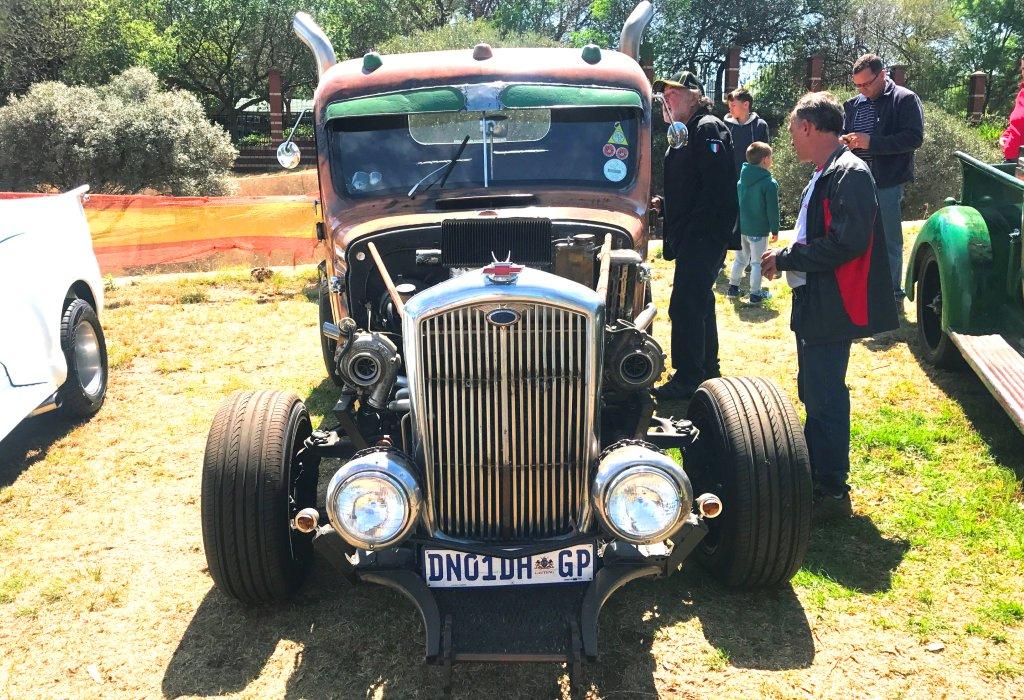 Brian Joss – Look out for Odd-Ball Classics and Young-Timers at the classic car fest to be held at Nasrec Expo Centre on Sunday November 11.

Our description for one these car categories  is “Odd-Balls”, classic cars that are starting to turn up at shows that you’d never have thought would become collectable. The second category is the “Young Timer” category, which are cars that appeal to the new-generation of classic car enthusiasts, in the 25-35-year-old age-group.

Young Timer classics are now starting to include cars like rare renditions of the Volkswagen Golf Mk I and Mk II. These are the cars that youngsters would have aspired to a few decades ago, and now the few survivors that are in reasonable condition are becoming worth-while collectables, simply because pristine examples are such a rarity these days.

The Two-Door Golf GT:  A Golf Mk I that we spotted at a recent show that really blew us away was the two-door version of the Golf GT. This is not to be confused with the four-door Mk I and Mk II Golf GTi, which has been building serious collector status for some time. The two-door GT had many of the GTi’s trimmings, but it was fitted with a 1600 cc carburettor motor, rather than the 1800 fuel-injected motor that powered the GTi. In other words, it was a GTi substitute for the young guy that couldn’t afford a proper GTi!

Cortina MK III, IV and V:  The first two renditions of the Ford Cortina have long been seen as collectable, but it is only in the past few years that the later Ford Cortina models are now achieving collectable status. These cars, built from 1970 onwards, have to be in good condition to be considered collectable at this stage. But in years to come, even scrappy examples will be restored, simply because good ones will become increasingly rare.

Opel Manta: This is a car that has suddenly captivated collectors here in South Africa. At The Classic Car Show a year ago we saw a special display of Opel Mantas, which were styled after their General Motors cousins in America, namely the iconic Chevrolet Camaros! Here, in the early 1970s in South Africa, the Mantas used a 1,9-litre overhead camshaft engine which had German origins, and they were seen as style cars, rather than hot performers. Today it’s that slinky shape that attracts the younger generation of classic car collectors.

The Ranger: Aah, this car had all sorts of patriotic connotations when it was launched in the late 1960s. It was touted as “South Africa’s Own Car!”

But basically it was a German-sourced Opel body fitted with a British-sourced Vauxhall grille and different hubcaps. And the engines were four-cylinder units that actually had their origins in six-cylinder and eight-cylinder designs in General Motors’ American engine plants. Okay, so the mish-mash was South African, as was the promotional campaign. And they were assembled in Port Elizabeth. In any event, today Rangers can be seen as a mix between Young Timer classics and Odd Balls.

Volkswagen 411: A mix of an Odd Ball classic and Young Timer. This VW 411 was never really rated as having any sort of enthusiast status when it was sold here in the early 1970s. In fact it was probably the least popular VW model launched here since VW started assembling Beetles in Uitenhage in 1951. Just a few years after launch, the 411 was replaced with the front-engined Passat, a vastly superior car in all respects. But funnily enough, the 411 is fast becoming collectable because good examples of the Type 3 VW which preceded it have become impossible to find. And in terms of design (if not production), the 411 is the last of the rear-engined, air-cooled VWs. As for the front-engined, water-cooled Passat, it’s time hasn’t come yet, even amongst the Young Timer movement. So maybe now’s the time to find a mint example!

Rat Rods: Rat Rods are a type of vehicle with their own band of fans world-wide. Traditional hot-rodders view them with something approaching scorn, because it is much easier to simply weld on tacky odd-ball artefacts onto an old rusty body than to spend thousands of hours re-working a classic 1930s or 1940s Ford or Chevy into show condition. But Rat Rods are great crowd pleasers. And the imagination that goes into them always draws a big, chuckling crowd at a car show.

And once you have scoured the display areas at Nasrec for Odd Balls and Young Timers, you can step back and appreciate the hundreds of traditional muscle cars, cruisers, pick-up trucks, hot English classics like Minis and Ford Escorts, VW buses and Beetles  that traditionally have made The Classic Car Show a must-see event.

Organiser Paulo Calisto reports that another feature of this year’s summer show will be an extensive Family Day area, where there will be swimming pools and jumping castles and kiddy -pedal go-karts to entertain the younger members of the petrolhead fraternity. And for the moms, there will be the enticement of the Prawn Festival, which has become another regular feature of The classic car show.

Apart from the cars, there is a host of activities to keep the family entertained including a flea market, beer garden, live music, helicopter rides, a prawn festival and more.

Opening times at Nasrec on Sunday  November 11, are 7 am for exhibitors.

Owners of classic cars will be granted free admission, as well as one passenger per car. Classic car owners are advised to get their cars into the display areas as early as possible on Sunday, November 11.

Gates for spectators open at 8 am. Spectators will be provided with ample parking at a price of R20, with access to the show via the gates on the south side of the expo centre, close to Nasrec Road.

Admission prices are R60 each for adults and R20 for children under 12, if booked via Computicket.

Entry prices at the gate are R80 for adults and R20 for children under 12.

For more information visit www.classiccarshow.co.za, or contact Paulo Calisto on 066 053 5425.