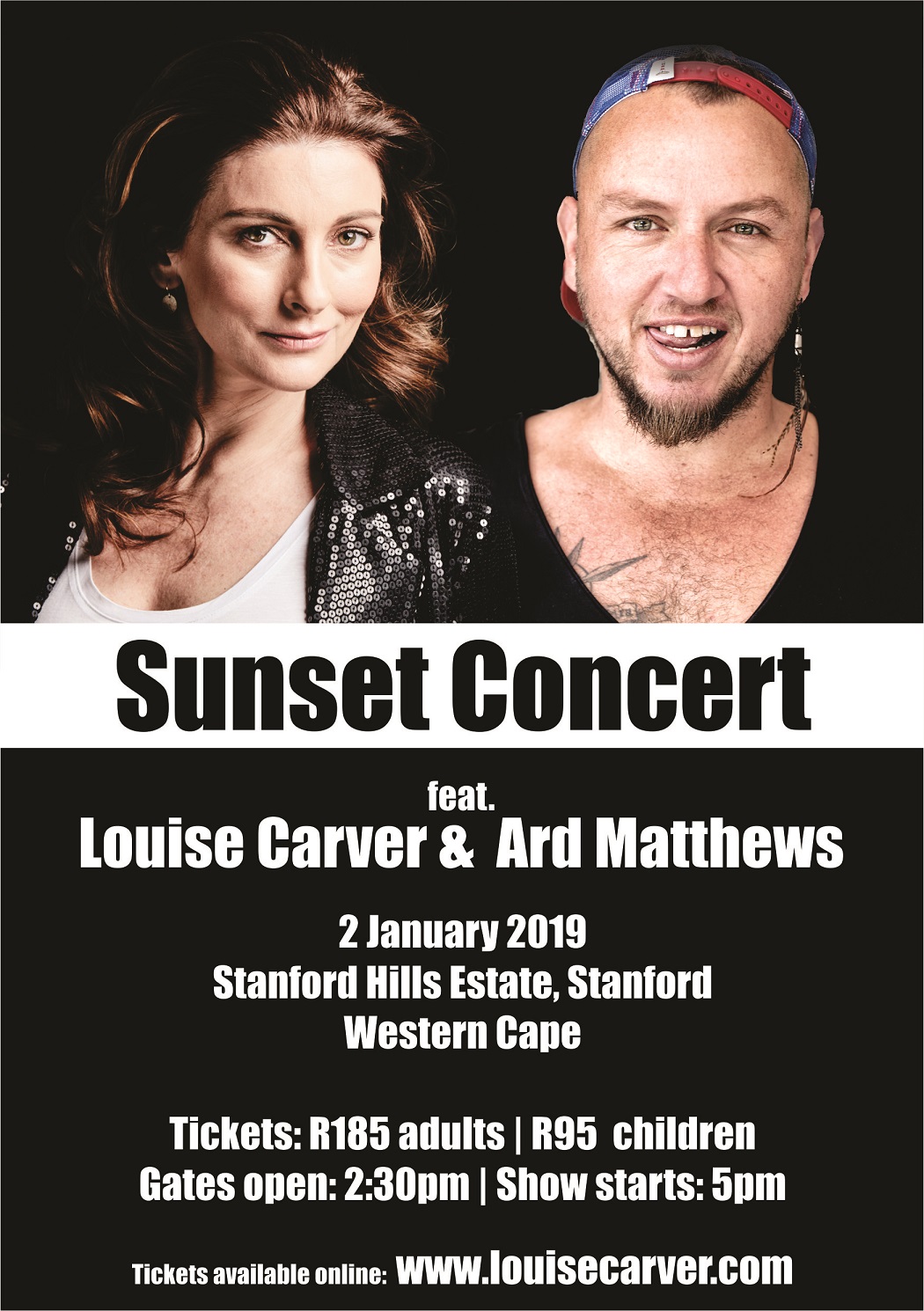 Two of South Africa’s most talented singer-songwriters with multiple radio hits between the two of them, have decided to come together to create another magical sunset concert at a beautiful, scenic estate to celebrate the new year. This unique show will include Louise Carver and Ard Matthews` well-known hits plus some very special collaborations between the two of them.

Carver says that Stanford Hills Estate is one of her favorite outdoor venues to perform at. “My parents live in Hermanus and I am originally from the Cape, so it has that extra bit of nostalgia and connection for me. Playing all my hits whilst the sun sets over the Hemel en Aarde Valley is a beautiful way to start the year.”

Louise Carver has had multiple radio hits with singles such as ‘Empty Fantasy’, ‘It Don’t Matter’ and ‘Warrior feat. Zulu Boy’, and her latest album ‘Hanging In The Void’ has delivered many more radio hits and fan favourite singles. The album was recorded with one of SA’s finest producers, Mark Beling, and is arguably Carver’s best work. The fourth single off the album, titled ‘Remedy’, was released in September 2018. Link to view the video of the single here: https://www.youtube.com/watch?v=mKePMy1djMM

‘Hanging In The Void’ Louise Carver’s most heartfelt and emotionally stirring album. First single ‘Lift Off’ launches the album with a powerful message of hope and belief, follow-up singles ‘Keep Your Eyes On Me’, ‘This Thing Called Love’ and ‘Remedy’ pulls on the heart strings with its emotional delivery and stand out tracks ‘Time Stood Still’, ‘Your Love Is Like’ and ‘All the Lessons’ all tell a story of a tough personal journey that lead to creating one of her best records.

Ard Matthews shot to fame as the front man for legendary South African band, Just Jinjer, acclaimed for hits such as Shallow Waters, She Knows, I Like You Madly and What He Means. Matthews launched a new solo album titled ‘Impossible Machines’ in July 2018. The album’s title track, also named ‘Impossible Machines’, is a thought-provoking account of our dependency on technology and devices, with an uplifting message that has caught the attention of radio stations, fans and new listeners alike. Released in May this year to widespread acclaim, the track charted in the iTunesSA top 10 in its first week and took the no.1 spot on OFM’s ‘Top 10 at 10’ just two weeks later. His latest single off the album, ’Pandora’, entered Jacaranda fm`s SA Top 30 in October. Matthews says: “This album is the closest I’ve come to breaking a few musical rules, which have bound me for some time now. I feel I have created something that is quite ‘out the box’, definitely for myself anyway.” Ard plays all the instruments on the album, which he recorded at Empire Avenue Studio in Hout Bay, Cape Town. Check out the video for ‘Impossible Machines’ here: https://www.youtube.com/watch?v=wSIIQoZJVxE

The venue, Stanford Hills Estate, nestled in the Hemel en Aarde Valley, just outside Hermanus, is a very special place. With views of the mountains and valley, people can bring their camping chairs and blankets and chill out after the Christmas / New Year mania. There will be a gin and tonic bar, food trucks with a variety of options [vegetarian and vegan included] and Stanford Hill’s exceptional wine selection.

Gates open at 14h30 and the show starts at 17h00. There will be two 45minute sets with 30 minutes interval in between.

Please bring old blankets to sit on, as there will be an Animal Welfare collection point on the day for you to drop them off after the show. Louise will then deliver them to Animal welfare in Hermanus on the following day.

Louise Carver Collection jewellery will be available to purchase on the day, as well as signed CD’s from both Ard Matthews and Louise Carver.