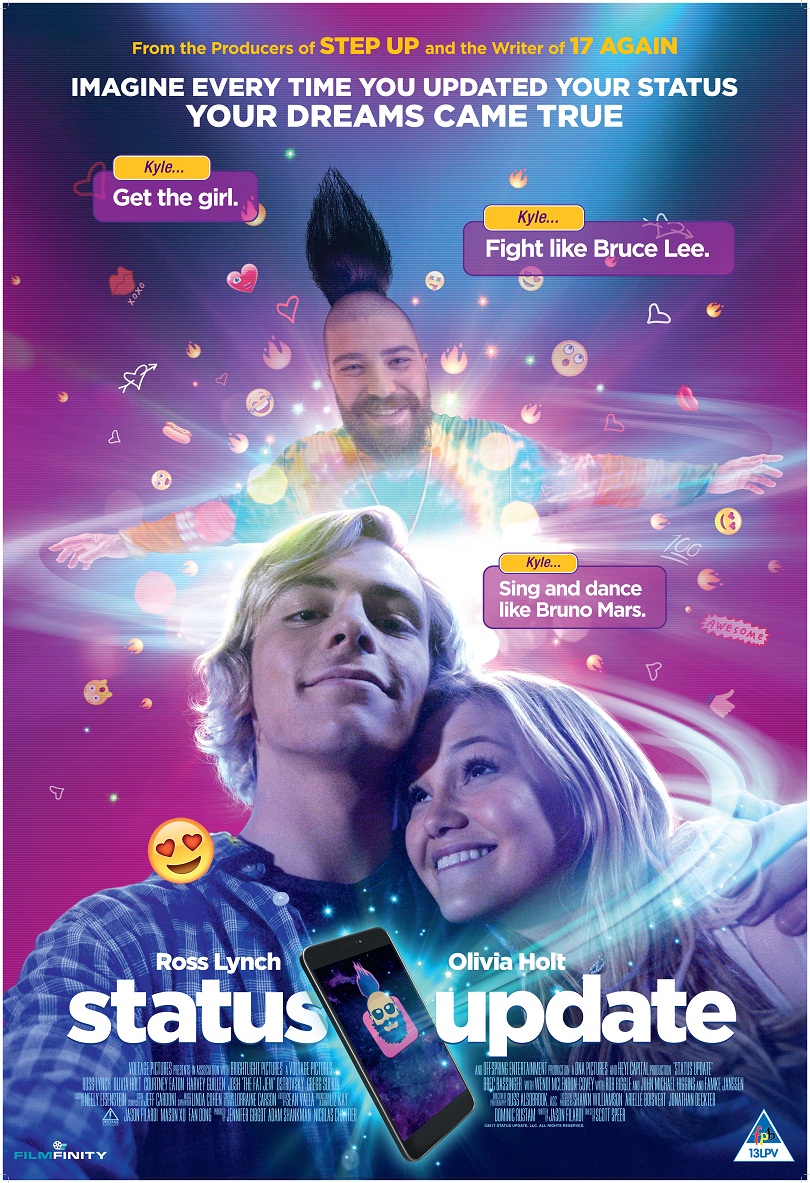 But what if you didn’t have to suffer? What if the shy, awkward you could suddenly be outgoing and confident? What if you could not only fit in, but be the coolest person in the room? Well, in STATUS UPDATE, there’s an app for that.

Directed by Scott Speer and written by Jason Filardi, teen movie STATUS UPDATE offers a glimpse of what life would be like if your dreams came true every time you updated your status.

The movie features former Disney Channel star Ross Lynch as the quintessential California kid Kyle, who is uprooted when his parents split, and his mom (Wendi McLendon-Covey) takes him and his younger sister cross-country to Connecticut.

As expected, Kyle is a total fish out of water and his first day consists of one humiliating incident after another, resulting in his cell phone being smashed by bullies, led by Derek. But everything changes when he goes to the mall to get his broken phone fixed.

There he meets a strange, seemingly insightful cell phone salesman (Instagram celeb Josh Ostrovsky), who introduces him to YOUniverse, a mysterious app that effectively turns his phone into a 21st century Aladdin’s lamp.

Kyle soon discovers that with just one sentence, he can get whatever he asks for – whether it’s a visit from his father (Rob Riggle), the pipes to win a part in the school talent show, or the talent to threaten the hockey captain’s dominance on the ice.

But with great power comes great temptation, and Kyle begins to want more and more. In a matter of weeks, the new kid turns into the school’s most popular all-rounder – he becomes the person every guy wants to be, and every girl wants to date.

As in life – and every other wish fulfilment film – when something seems too good to be true, it often is. Kyle finds himself the victim of his own desire for acceptance and social media fame. Can he set things straight and make amends with those he hurt?

STATUS UPDATE’s combination of a talented fresh faces like Ross Lynch, Olivia Holt, Gregg Sulkin and Courtney Eaton with a handful of proven actors such as Rob Riggle, Wendi McLendon-Covey and John Michael Higgins, makes for an exciting and hilarious ensemble.

“The goal was to create a story that was relevant today but had the fun and heartfelt feeling of a John Hughes comedy, a magical, modern day fairy tale not unlike Big or 17 Again, and then bring that story to the big screen. I think the team behind STATUS UPDATE accomplished that and more,” says Filardi.

While STATUS UPDATE follows the usual teen film culture, it spices up the stereotypical with comedy, fantasy, and a moral lesson.

The movie is also a commentary on social media. As if high school wasn’t torturous enough for some teens, they’re now subjected to the cruelty of believing everyone’s life around them is better than theirs. And it’s all there on display in perfectly filtered pictures. But while social media makes everyone’s lives seems flawless, in truth, without the filters, none are.

STATUS UPDATE is distributed by Filmfinity (Pty) Ltd. and will be released nationwide on 23 November 2018.