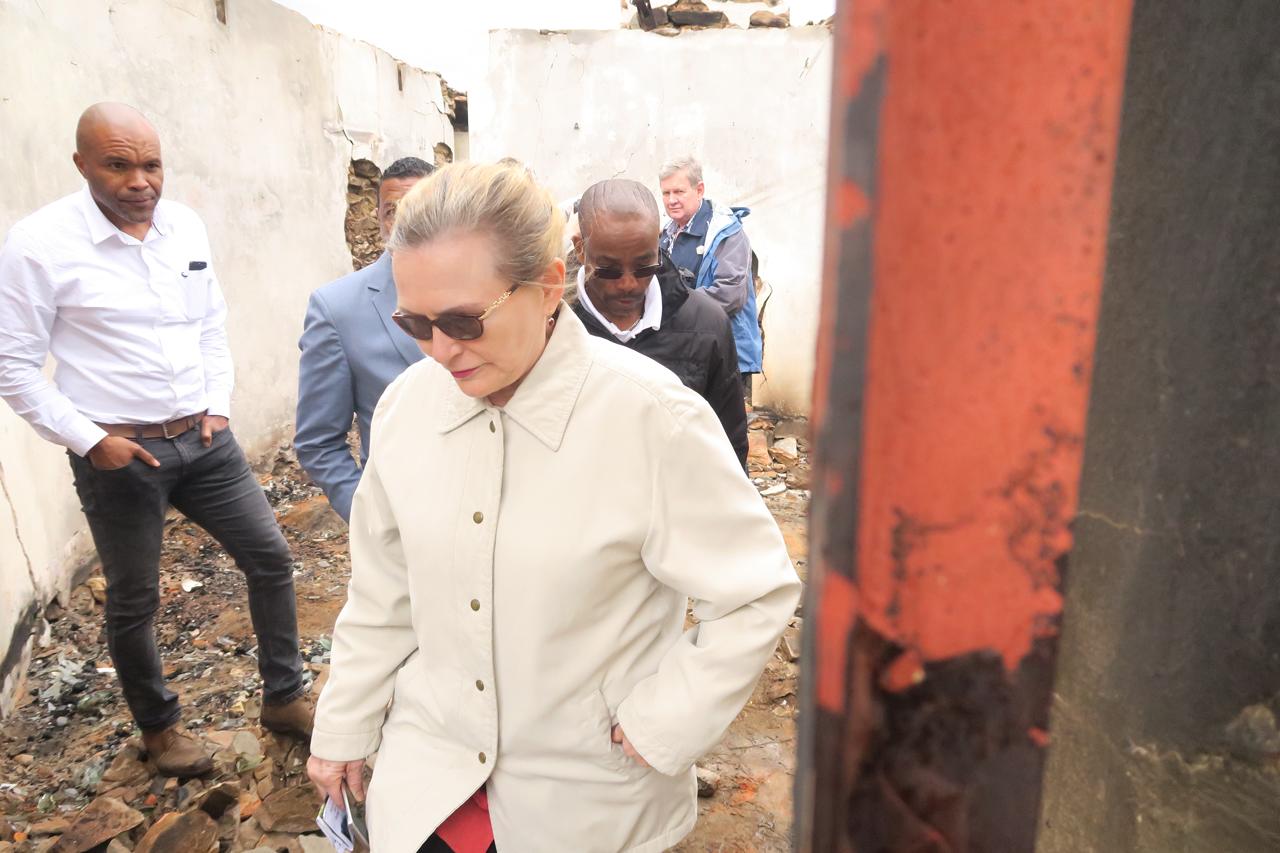 On Wednesday 24 October a fire in the Harold area was reported to the Garden Route District Municipality’s (GRDM) Disaster Management Centre (DMC) but at that point in time, all available resources were still tied up at a fire raging at Vermaaklikheid.

Teams from the George Municipality responded to this fire and were joined by teams from the GRDM on the following day. The magnitude of the incident, as well as the potential risk of the fire, led to the establishment of an Incident Management Team (IMT) and a Forward Control Point (FCP) was established at Witfontein. In addition to the Harold/George fire this IMT was informed of another fire on SANParks ground near Farleigh. San Parks informed the IMT that this fire is managed by their staff and was under control.

The fire spread in the Outeniqua Pass in areas not accessible by foot and was spreading towards the George Municipal area. One South African National Defense Force (SANDF) Oryx helicopter, two aerial tractors (fixed-wing aircraft designed to bomb water) as well as two Huey helicopters from Working on Fire (WoF) and one private helicopter, were contracted to assist with firefighting operations. Unfortunately, at critical times during the firefighting operations, these resources could not be activated due to poor visibility making it impossible to use aerial resources.

The first areas threatened, included settlements on the northern side of the mountain.  These included Waboomskraal, Eselsjacht, Harold and Louvain. Extremely dry and windy conditions led to the rapid spread of this wildfire endangering George from the North on Monday 29 October 2018 leading to the call of voluntary evacuations in various areas of the town. 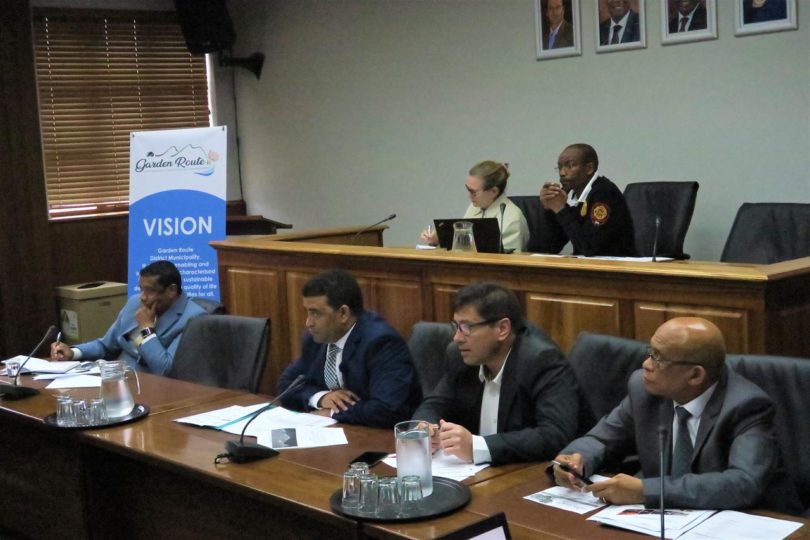 By Monday evening, 29 October 2018, 262 people were evacuated to the George Civic Centre (121 children, 137 adults, 11 elderly) in addition 133 students evacuated from the Nelson Mandela University campus in George (NMU). They were housed by Faith-Based Organisations (FBOs) in George. The people evacuated in George were advised that they could return to their houses once the smoke has cleared and the area became safe. 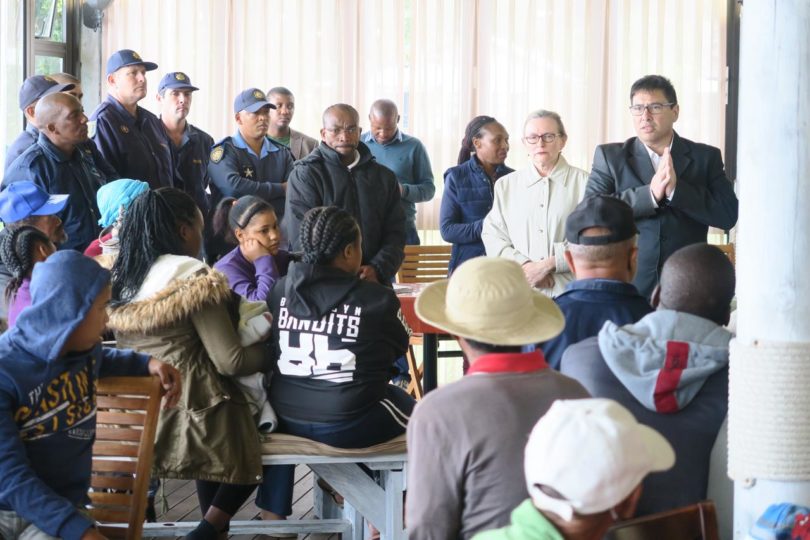 In addition to the Harold/George wildfire, lightning during late Monday afternoon ignited wildfires in the following areas:

Around this time, the IMT was also informed that the wildfires on the Eastern Cape border near Stormsriver was completely out of control and the N2 would have had to be closed off periodically.

Due to gale force winds in the Karatara area (wind speed measured on the site reached 109 km/h), the wildfire on SANParks ground spread past the natural vegetation (normally seen as a wildfire break) and surprised the residents at Farleigh “ Bosdorp” Unfortunately 8 lives were lost when 13 of the 28 houses at the Bosdorp were completely destroyed.

The Department of Social Services personnel have been rendering trauma counselling to the bereaved as well as those traumatised by the wildfires. SASSA will assist where possible.

During the entire incident, the Department of Education has arranged for school children to stay by safe school grounds until conditions at home turned back to ”normal”. They also provided accommodation at hostels for grade 12 learners who could have been affected by the wildfires where they resided – these learners are busy with their final-year exams at the moment.

During Monday afternoon on 29 October 2018, the Eskom powerlines providing power to Knysna, Bitou as well as Oudtshoorn, were affected by the wildfires which led to these areas being without power for a short period of time. Fortunately, the electricity was back up before the evening. On Wednesday, 31 October 2018, the power supply to the NMU was reconnected. Yesterday, for a second time, the power supply to Oudtshoorn had to be cut as teams had to work directly under the high voltage lines in the Highlands Lodge area (Waboomskraal). The power was partially re-connected at 17h00 yesterday afternoon.

On Sunday evening 28 October 2018, the wildfires posed a real threat to the George waterworks but with well-timed back-burns, this threat was eliminated.

Most of the patients treated by the George hospital and clinics were due to smoke inhalation. Two of the people injured at the Karatara wildfire are still being treated at the George Hospital.

Yesterday, 4 November 2018, the main areas of concern included the:

From George urban fringe settlements to halls in George (+/- 395 people)

From Knysna rural areas to halls in Knysna (+/- 250people)

Captions: Premier of the Western Cape visits the Montagu Pass, Old Toll House which was destroyed by the recent wildfires.