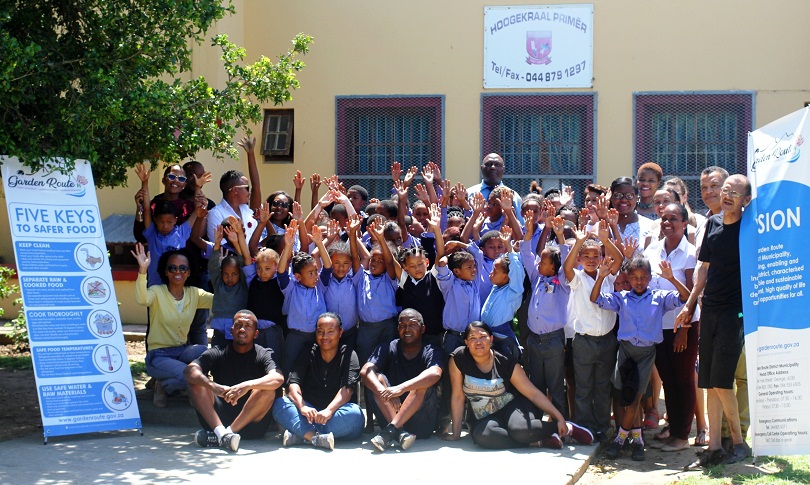 The Municipal Health team from the Garden Route District Municipality (GRDM), on Wednesday, 24 October 2018, surprised the learners and educators from the Hoogekraal Primary School near George, with a “different type” of health and hygiene training.

The learners looked confused when the team arrived, but soon a change in atmosphere took place when Ms Lana Don, Environmental Health Practitioner from the Municipal Health office in George led them with a song “Hands, shoulders, knees and toes” where after she opened the event with a prayer.

The highlight of the event was when the “Youth for Change” drama group from Oudtshoorn performed various plays to convey messages relating to daily health and hygiene practises.  In the play, the learners witnessed how their “Grandmother” passed away in front of them due to poor health practises and unhealthy eating habits.  Seeing this happen, got some of them almost in tears. The young audience was not impressed with the bad and unhealthy lifestyle of their “Grandma” which ended up causing her death.

Ms Carike Jantjies, during her presentation to the learners focused on various aspects, such as the safe storing of food and the temperature in which food must be warmed up.  “Food must be stored in a temperature of no less than 5oC and must be heated in a temperature of 60oC or more,” she emphasised.  Ms Jantjies also enlightened the learners about Listeriosis, how it is borne and the dangers thereof.  Environmental Health Practitioner, Ms Janine van Wyk, with colleagues Ms Ivy Mamegwa and Ms Sive Mkuta, demonstrated proper hand washing techniques to the learners.  Ms van Wyk explained to the learners: “Do not only wash your hands, but also from the lower to the upper (middle) part of your arm”.  Ms Van Wyk furthermore reiterated that, hands must be washed after playing or after lunch breaks and after using the toilet.

Ms Emmy Douglas, GRDM Chief:  Municipal Health at the GRDM George office, thanked the school principal, Mr Grootboom, for warmly welcoming the team on their arrival and allowing them to educate the learners in respect of good health & hygiene habits. She extended a special word of gratitude to the drama group and said:  “You portrayed and conveyed the message to the learners in the best way possible, and we thank you”.

Mr Grootboom officially thanked the GRDM team and the drama group for making time and effort to reach out to the school.  He said: “It clearly shows that Garden Route District Municipality did not forget about our school’s existence. We truly appreciate this important outreach”.  Mr Desmond Paulse, Manager:  Municipal Health from the Oudtshoorn area, also attended the event.

Caption: Learners and educators of the Hoogekraal Primary School, with the Municipal Health team from Garden Route District Municipality and the “Youth for Change” drama group, soon after the formal programme of the health & hygiene training.