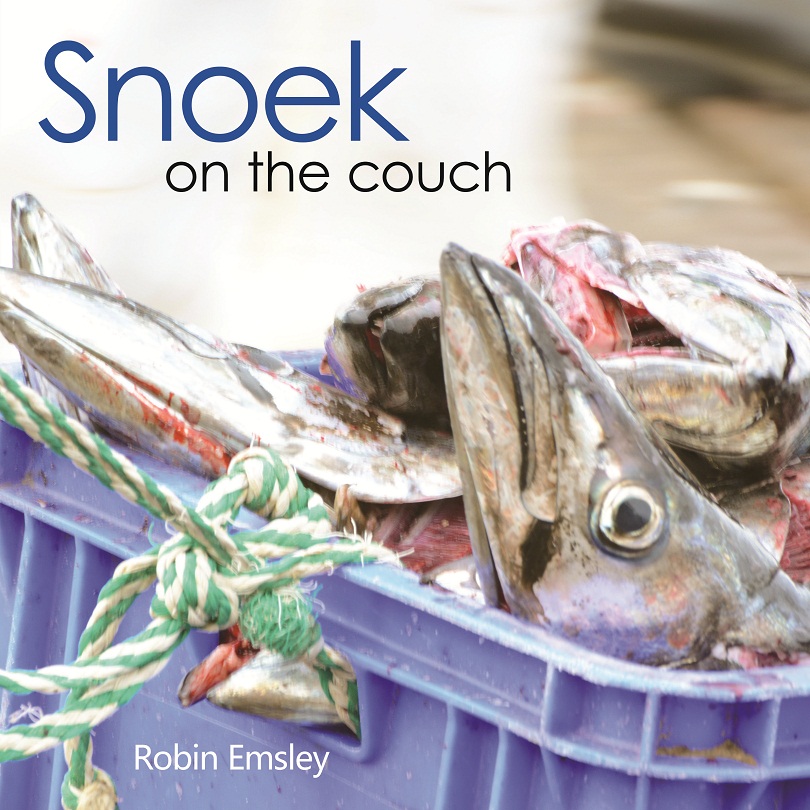 I am one of the few people I know who don’t like snoek in any form: braaied; as a spread; in tomato; as frikkadels or as smoorsnoek. Now Robin Emsley, a professor of psychiatry at Stellenbosch University, has put the snoek on the couch. The professor was fascinated by this strange and beautiful creature, (they say beauty is in the eye of the beholder),the first time he saw one at St Helena Bay Harbour after they bought a beach cottage near St Helena Bay on the West Coast.

The book is about life and the Great Injustice. Briefly the Great Injustice “has to do with life itself; the realisation that, for one creature to survive it needs to sustain itself by devouring other life forms. That applies to humans who are hard-wired to eat other animals, even though we profess to cherish life and go to great lengths to preserve it. So too the snoek, although I am not sure if it goes to great lengths to preserve life, as it is a fierce pelagic predator. It eats little fishes and has been doing so for millions of years. The thyrsites atun, its scientific name, says Professor Emsley, tells the story of the Great Injustice. Next time you have a close encounter with a snoek that you’ve bought from the back of a bakkie or at the harbour, “look at its human-like face: the stubborn, protruding jaw and down-turned mouth express surprise, sadness, resignation. The huge eyes seem to be appealing, attempting to convey something”.  “Then look through the eye and into the soul of  the snoek and discover your own inner snoek”. Writes the prof: “The eyes of the snoek are sad and appealing. But I also think knowing and understanding, perhaps recognising our shortcomings as a species and knows that we are caught up in something that is existentially  but morally indefensible.” In other words we have been unable to stop eating animals and the snoek can’t stop eating small fish, so it’s a bit like the pot calling the kettle black. Though some people have been able to defeat their baser instincts by becoming ethical vegans, or vegetarians, eschewing meat.

Snoek On The Couch is a fascinating journey through life and it is much than about the snoek. The professor explores language; the snoek people of the West Coast: their colourful but hard life and an unusual experiment which proved that an albino bulbul was aware that it was different from others in the flock who flew in to feast on the fruit salad on the deck of the Emsley beach cottage. The snoek people are also put on the couch and the prof learns that they have an unusual linguistic dexterity. Emsley also delves into issues of mental health. One day Emsley saw a hundreds of snoek piled up at the harbour after a good run. The snoek all had the same unsmiling expression, perhaps if we were yanked out of our environment tempted by a tasty snack, we’d look like that too.

On his journey with snoek the prof learned some ugly truths: they’re infested with worms, flesh-eating nematodes which are harmless to humans. But he believes little research has been done on the worms. However, no evidence of harm is not the same as  evidence of no harm. The truth about pap snoek was also an eye-opener: it is caused by a parasite, which after infesting the snoek it migrates to the muscles where it hides from the fish’s immune system and then multiplies into millions of spores. The “soft flesh syndrome” also affects salmon and lump fish.

Now I know why I have an aversion to snoek. Professor Emsley does too and he is having self-therapy , aided by produce from the wineries to try to overcome it. I don’t have much hope that he will ever really enjoy snoek. He also has a dislike of green beans and pumpkin, among others, and if they’re at a dinner, his wife discreetly moves them onto her plate.

My own aversion are peas and minced meat. If one pea is accidentally put on my plate I get someone else to remove it. I very seldom eat a hamburger, and only when I am forced to.

Snoek On The Couch is an intriguing book. It started as a collection of photographs that he took during the annual snoek runs and then he decided the images would be enhanced by text and so this book about Life (the snoek) and the Great Injustice became a reality. The thread running through the book is the “conflict between our need to survive and the value we place on all life, beyond just our own species”. It is also written in plain English and there are some humorous touches too. The images are excellent.

Proceeds from the book will go towards establishing a research fellowship tasked with improving the fishing and marketing of the snoek in ways that will benefit the West Coast snoek fisherman.