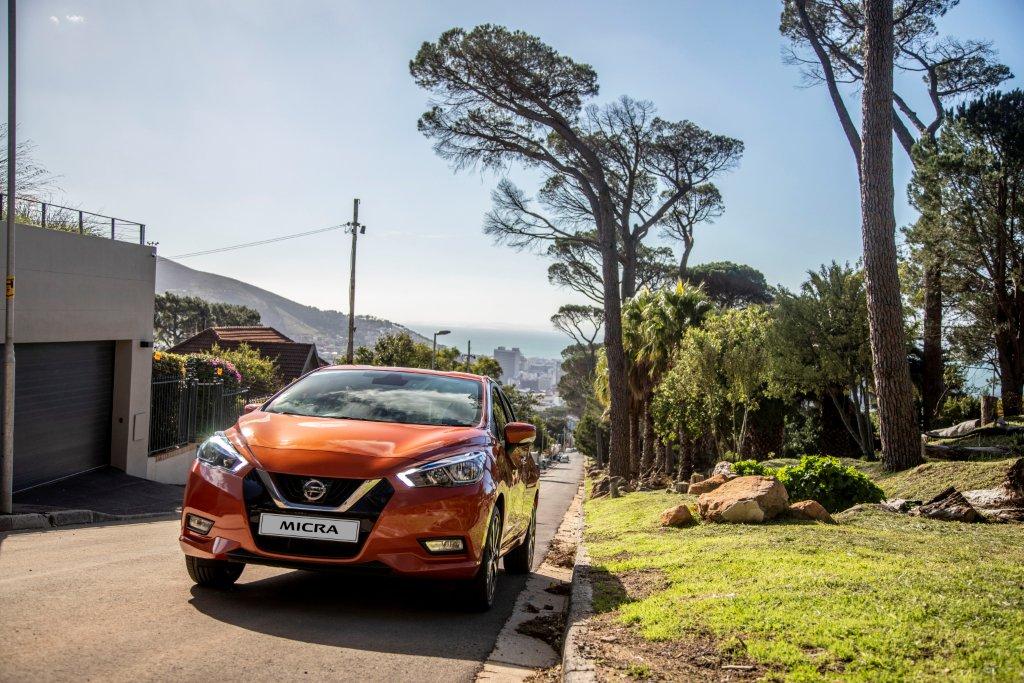 Brian Joss – When the first Nissan Micra was launched here about 10 years ago it also came with its own Micraspeak, a misguided attempt, I thought at the time, to attract a younger market who understood Klingon, the language developed especially for the Star Trek series.

Some of the Micraspeak words that I remember were Spafe (spontaneous), Smig (small-big), Thractical (practical) and Luxurable (luxurious, but affordable). Not because they were unforgettable but I am a sucker for the trivia of life.

We took the Micra on a test run to Hermanus and the car, the design brought to mind a “stinkbug”,  did attract quite a lot of attention. It was powered by a 1.2 litre engine which was quite perky and Sir Lowry’s Pass wasn’t much of an obstacle.

The new Nissan Micra equipped with a five-speed manual transmission is powered by a 900cc (might as well call it a 1-litre) turbocharged three-cylinder petrol engine, the same one utilised in  Renault’s Clio and it delivers 66 kW@ 5 500r/min and torque of 140 N.m at 2 250r/min.  The test car was the middle of the range Acenta which is packed with technology, quite a change from the Micra of yore. The design too has undergone a dramatic metamorphosis. It no longer looks like a stinkbug: it’s attractive and joins the ranks of the hatchback, but it is more than a hatchback and has that something that grows on you. Quite a few “kyk-daars” commented on it when I parked at a shopping mall. It has a shortened bonnet, narrow headlamps and LED daytime running lights and halogen lamps are standard through the derivatives. The front-end design, Nissan’s trademark V-motion grille is emphasised by the lights. The black B and C pillars give a floating roof effect while the rear door handles have been sunk into the C-pillar helping to give it a more stream-lined appearance. Boomerang shaped light clusters are at the rear and the back  bumper with a carbon-look finish hides the exhaust. There is also a roof spoiler. The cabin has been built around a T-shaped “gliding wing” dashboard, Nissan, said. There is plenty of room for the driver and passenger with enough space at the back for two average sized adults.  The two-tone soft touch materials are of good quality. The controls are close at hand: all-in-all it’s neat without being overly brash or in your face.  The steering column is adjustable for rake and reach so it wasn’t difficult to find a comfortable driving position.

Although the steering wheel is plastic it doesn’t feel cheap and the various controls are on the spokes.

The Nissan Micra performs excellently even though it only has a 900cc engine. Ten years ago an engine was not even a twinkle in the engineer’s eyes. And who would have believed that powertrains this small would be fitted to cars like the Fiesta (The Gremlin, October 22) and the Clio.  The Micra’s “little” motor powers up the hills with ease and is able to keep up with fast flowing traffic on the freeways. On the open road it nips along at a rapid pace and the five-speed gearbox was smooth. However, lower down the range it does lack a bit of oomph so you need to rev it up a bit to get it back to speed. But that’s just a minor issue. Sometimes the Micra gave a hiccup when I was changing from first gear to second gear, as the clutch seemed to kick in unexpectedly. There is some cabin noise but not so much that it’s intrusive. The build quality I found was good too and  there were no unexplained rattles. The steering is light and because of the Micra’s size, 3 399 mm long, you can easily squeak into the smallest of parking spaces. Surprisingly, you can pack quite a lot into the 300-litre boot, which expands to 1 004 litres with the usual 60-40 split, according to Nissan. There is also a space-saver tyre. Storage options include a large space for a phone  in the centre console in front of the gear lever. It features USB and 12v sockets. Technology is on a par with other vehicles in the upper bracket of this market segment The Accenta has a seven inch touch screen in technicolour where you can access music, messages and map through Apple CarPlay. When you connect your iPhone via the Apple lighting cable Siri comes through loud and clear, Apple maps, telephone services and other apps include  Audiobooks and Spotify, said Nissan. In addition, the advanced driver assist display provides drivers with key information about the car and your journey. It is the same technology Nissan developed for the Qashqai and the popular X-Trail (The Gremlin, May 14), which you can control using the buttons on the steering wheel.  Standard across the range are six airbags, Isofix child seats, vehicle dynamic control, anti-locking brake systems, electronic brake force distribution and hill start assist. Fuel consumption is reasonable about 5.5 litres/100km. The Micra is never going to burn rubber at the lights; it can go from 0 to 100km/h in 12.1 seconds and according to Nissah has a top speed of 170km/h. Summing up the Nissan Micra Acenta is an excellent all-round package and easy to drive. It has a price tag of R257 400 which just goes to show that budget and compact doesn’t have to mean cheap and nasty. The Nissan Micra is covered by Nissan Assured and comes with a 6-year/ 150 000km warranty and a 3-year/ 90 000 km service plan and 24/7 roadside assistance.