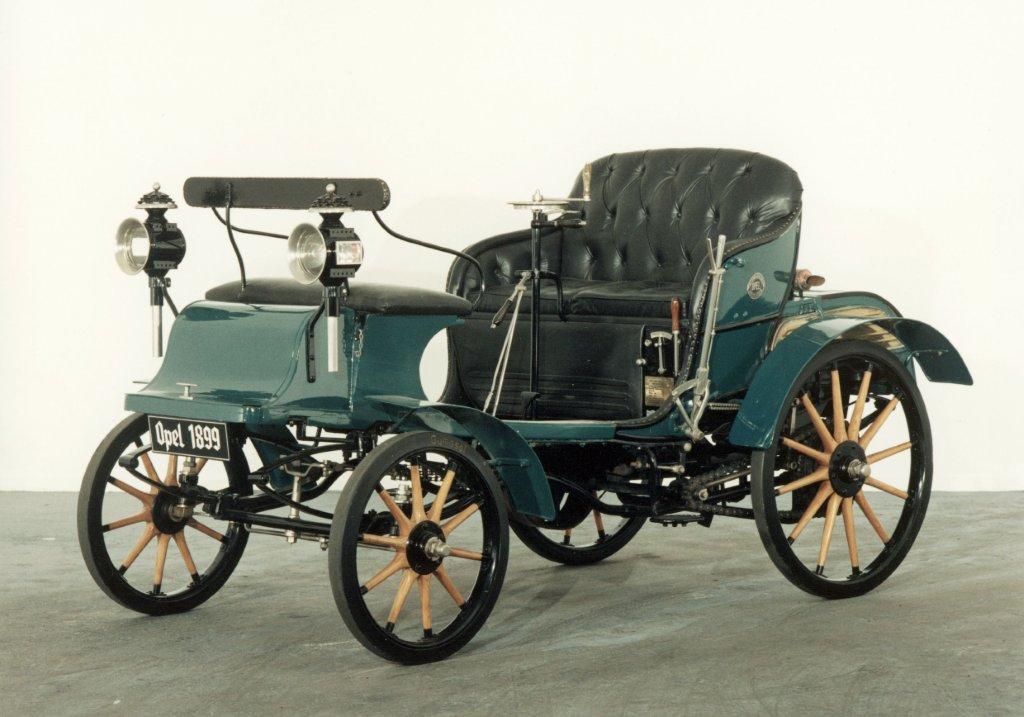 Brian Joss – Four years after the death of her husband, Adam Opel,  in 1895, Sophie Opel decided to start producing cars after listening to the opinions of her sons Carl, Wilhelm and Friedrich Opel.

Prior to this, the Opel family specialised in the manufacturing of bicycles. What started with a dynamic woman at the helm in a garage in ‘Rüsselsheim am Main’ with a few hand-made ‘Opel  Patentmotorwagen’, became the Opel vehicle empire we know today – a remarkable phenomenon with more than 70 million Opel vehicles built to date!

From the very beginning, Sophie Opel championed the cause of producing cars as efficiently as possible, thus offering better vehicles at more competitive prices than its direct competitors. For example, as early as 1924, Opel became the first German vehicle manufacturer to introduce the concept of ‘economic assembly line production’. This production method resulted in the Opel 4/12 PS ‘Laubfrosch’ and all the later Opel 4 PS variants becoming bestsellers in Europe. The Rüsselsheim-based company already produced technologically-advanced vehicles for the masses with the OPEL P4 and the Kadett in the 1930s (the Kadett then already had a self-supporting body). As a result of Opel’s pioneering work, German-engineered vehicles became more affordable and accessible to anyone.

Opel even stayed true to this democratising of mobility when developing its first sports car – a more affordable ‘dream car’ hit the roads in 1968 in the beautiful form of the OPEL GT!

Since its early inception, the Opel brand has been playing a leading role in all vehicle segments – models such as the Kadett, Rekord, and Kapitän characterised the period of reconstruction and the period of the ‘economic miracle’.

Thereafter stylish sports icons such as the OPEL GT, Manta and Monza followed. During the 1980s and 1990s, models such as Corsa, Astra, and Zafira became bestsellers and symbols of reunification. No wonder then that, after the fall of the Berlin Wall and the opening of the plant in Eisenach, Opel became more popular than ever before. The first-generation Astra was produced 4.2 million times between 1991 and 1998 … making it the most popular Opel model ever.

The Rüsselsheim-based carmaker is still firmly anchored in the centre of the European society and offers technologies that are normally reserved for more expensive premium cars. Innovative solutions such as the IntelliLux LED® matrix light in the compact Astra (European Car of the Year 2016 and South African Car of the year in 2017), as well as in the Insignia flagship, the AGR-certified active ergonomic seats (available in ultra-luxury carlines) or the extensive array of assistance systems for more safety and comfort, are all signature elements for Opel.

Opel joined the ranks of the automotive pioneers of the late 19th century which include Daimler, Mercedes-Benz, and Peugeot by buying Friedrich Lutzmann’s motorcar factory. In the spring of 1899, the first Opel patent motorcar ‘System Lutzmann’ was built in Rüsselsheim. Two years later, a converted Lutzmann won the Heidelberg-Königstuhl ‘Mountain Race’ by beating no fewer than 16 other vehicles made by well-known German carmakers.

At the time, the development in the automotive industry was fast and furious. While the first models were direct descendants of horse-drawn carriages, OPEL launched an ultra-modern small car at an extremely competitive price as early as in 1909. The 4/8 PS Opel  Doktorwagen already had an Opel -engineered and Opel-built 4-cylinder in-line engine. The Doktorwagen was available at between 4,000 and 5,000 Deutsche Mark, while many other cars that were manufactured during this period cost in the region of 20,000 Mark. Opel, therefore, transformed the motorcar from a prestigious toy for the rich and the famous into a more affordable mobility solution for a broader target market.

Friedrich Opel – promoted to chief engineer by now – and his brother Wilhelm Opel, introduced the assembly line production at Opel in 1924 (Ford was the first company to introduce this cost-cutting method in America in 1913).

The Opel brothers then launched the innovative 4/12 PS ‘Laubfrosch’ car – a two-seater with a top speed of 60 km/h and selling at 3,900 Deutsche Mark, thanks to the assembly line production. Later, the ‘car for everyone’ was made available at 1,930 Deutsche Mark. In the following years, an entire vehicle family was created, based on the ‘Laubfrosch’ technology and a total of 119,484 OPEL 4 PS models were manufactured until 1931.

What these revolutionary cars were for the 1920s, the new Opel Kadett was for the 1930s. Automotive progress was making huge waves and the Kadett replaced the successful P4 and celebrated its debut with a self-supporting steel body, single-wheel front suspension, 4-cylinder four-stroke engine, and hydraulic drum brakes. The prices were well below those of the direct competitors. In 1938, the ‘normal’ OPEL Kadett limousine was made available for an affordable 1,795 Deutsche Mark!

The Kadett nameplate was revived in 1962 and Opel upped the ante even further with the Kadett A. While many competitors still relied on a two-stroke or air-cooled rear-mounted engines, the newcomer Kadett stood out with the advanced technology of a water-cooled 4-cylinder engine, quiet 4-speed transmission and body styles ranging from coupé to caravan.

The first all-new Opel after the war was the Olympia Rekord and it introduced a new era with its ponton-style body and chrome-plated sharkmouth emblem. Cues for the design was taken from that of large American limousines and proved to be perfect for the economic miracle that was just starting to gain momentum. Those who were successful wanted to show it off to their peers … so it introduced the Olympia Rekord Caravan – a lifestyle estate version to accommodate the whole family.

Many new Opels saw the light thereafter. An all-new Kapitän arrived in 1954; the Rekord P2 was introduced in 1960 and the Rekord A followed in 1963, fitted with disc brakes and soon afterward with 6 cylinders. Whether as a coupé, estate or limousine – the mid-size Opel Rekord became synonymous with the new affluent middle-class of the young Federal Republic of Germany. Opel produced 882,433 Rekord A vehicles by 1965. This success opened the door for the arrival of the  ‘big three’: the Kapitän, Admiral and Diplomat – and the ‘KAD’ (1964) … all luxury class vehicles. The second generation of these KAD models even boasted a unique level of driving comfort, thanks to the legendary ‘De Dion’ rear axle. The manufacturer also introduced the ‘safety steering column’ in all passenger car models in 1968 – innovations to help cope with the growing amount of traffic.

In 1982, OPEL made yet another huge splash with a small car. The Corsa A rounded off the company’s offering by fitting neatly under the Kadett. The Corsa was an impressive display of getting the most out of a small car, without compromising on driving pleasure or cost-effectiveness. Every single generation of the Corsa (A to E) continued the democratisation of individual mobility. To date, almost 14 million Corsas have been registered. And next year the next generation will follow adding a new chapter to the story – with a fully electric version of the Corsa!

Just as the Opel Corsa has shaped the small car segment, the Zafira has defined the compact van segment with room for seven occupants since 1999. The third row of seats that fold flat entirely under the boot floor is simply a stroke of genius. Owners of models manufactured by competitors have the painstaking task to remove the additional heavy seats when extra boot space is required. Seven people can easily fit into the 4.32 metres long Zafira. Alternatively, the compact van can double into a transporter in a matter of seconds by folding away the seats and creating a 1.56 x 1.15 metres loading area with a total capacity of up to 1,700 litres. The current Zafira is also a master of metamorphosis, doubling as a transporter and a lounge on wheels, thanks to the Flex7®Plus seating system.

A further trendsetter followed in the footsteps of the Opel Corsa and Zafira after celebrating its world premiere at the 2009 Geneva Motor Show: The Ampera … a car that redefined electro-mobility. The 2012 German Car of the Year was electric and also had its own source of power on board with the range extender. This made the Ampera just as independent from electric loading stations as any conventional passenger car. OPEL presented the next generation of the electric car at the 2016 Paris Motor Show – the new Ampera-e had an all-electric NEDC range of 520 kilometres thanks to its 60 kWh state-of-the-art lithium-ion battery. In addition, the 150 kW / 204 hp electric motor allows for acceleration better than most sports cars!

The next electric car from Opel’s Rüsselsheim factory will follow in 2019 already and OPEL’s electro-mobility will get yet another boost with the Corsa-e – out of the niche and onto the road!

Opel discovered the new ‘lightness of being’ with the launch of the current generation Astra in 2015. The new Astra weighs up to 200 kilograms less than its predecessor. The engine performance offering follows the downsizing strategy: smaller displacement and turbocharging, lower fuel consumption and higher efficiency. For the first time, the Astra is now also available with a highly efficient 3-cylinder direct injection petrol unit and the revolutionary IntelliLux LED® matrix light system, which turns ‘night into day’ after sunset without glaring other road users – a unique feature in the compact class! The Astra convinced customers and experts alike and was voted Car of the Year 2016 in 12 European countries, as well as overall European Car of the Year for 2016.

SUV is the buzzword of the hour in the automotive industry – occupants want to sit a little bit higher to enjoy a better view of their surroundings and to experience the flair of long-distance travel and adventure. Opel recognised this trend at a very early stage and proposed a unique offer in the B-segment. The cool sub-compact OPEL Mokka X was made available with all-wheel drive and proved to be extremely popular from the very start. In 2017 it was joined in the compact class by the Crossland X and the Grandland X. All members of the X-Family are available with the AGR-certified (Aktion Gesunder Rücken e.v.) active seats. Ergonomic and comfortable seats have been a part of the Opel DNA for a long time – 120 years ago the Opel Patentmotorwagen ‘System Lutzmann’ already proudly sported leather upholstery.

Opel has been one of the few international car brands to allow special edition models to be developed uniquely for the South African market. Examples include the iconic Opel GSi, the L Superboss and the Kadett 200iS.