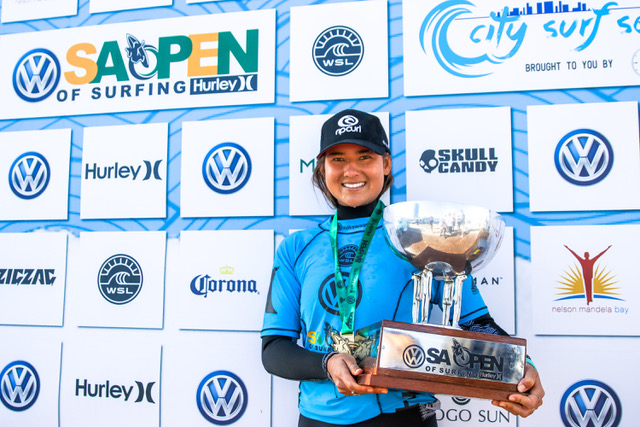 19 year old Brisa Hennessy (Costa Rica) has just clinched her spot on the 2019 WSL Championship Tour (CT), achieving her lifelong dream of becoming an elite professional surfer in just her second full time year battling it out on the WSL Qualifying Series.

This accomplishment makes her the first ever Costa Rican surfer to qualify for the CT and her win at the 2018 VW SA Open of Surfing presented by Hurley helped catapult her up the QS ratings. Due to the event being the biggest Women’s QS rated competition on the African continent and holding 3000 valuable points for the winner, this event sits as Henessey’s 2nd counting result on her QS ratings scorecard.

The young 2019 CT Rookie cemented her qualification in the final QS6000 event of the year at Birubi Beach, New South Wales, Australia when she placed equal fifth after being beaten by eventual event winner Nikki Van Dijk (AUS) yesterday.

Catch up on all the CSS action on social media:

The World Surf League (WSL) is dedicated to celebrating the world’s best surfing on the world’s best waves through a variety of best-in-class audience platforms. The League, headquartered in Santa Monica, is a global sport with regional offices in Australasia, Africa, North America, South America, Hawaii, Japan and Europe.

The WSL has been championing the world’s best surfing since 1976, annually running in excess of 180 global events across the Men’s and Women’s Championship Tours, the Big Wave Tour, Qualifying Series, Junior and Longboard Championships, as well as the WSL Big Wave Awards. The League possesses a deep appreciation for the sport’s rich heritage while promoting progression, innovation and performance at the highest levels, and in doing so crowns the undisputed world champions in Men’s, Women’s across all divisions within the tour.

Showcasing the world’s best surfing on its digital platform at WorldSurfLeague.com as well as the free WSL app, the WSL has a passionate global fan base with millions tuning in to see world-class athletes like Tyler Wright, John John Florence, Paige Alms, Kai Lenny, Taylor Jensen, Honolua Blomfield, Mick Fanning, Stephanie Gilmore, Kelly Slater, Carissa Moore, Gabriel Medina, Courtney Conlogue and more battle on the most unpredictable and dynamic field of play of any sport in the world.