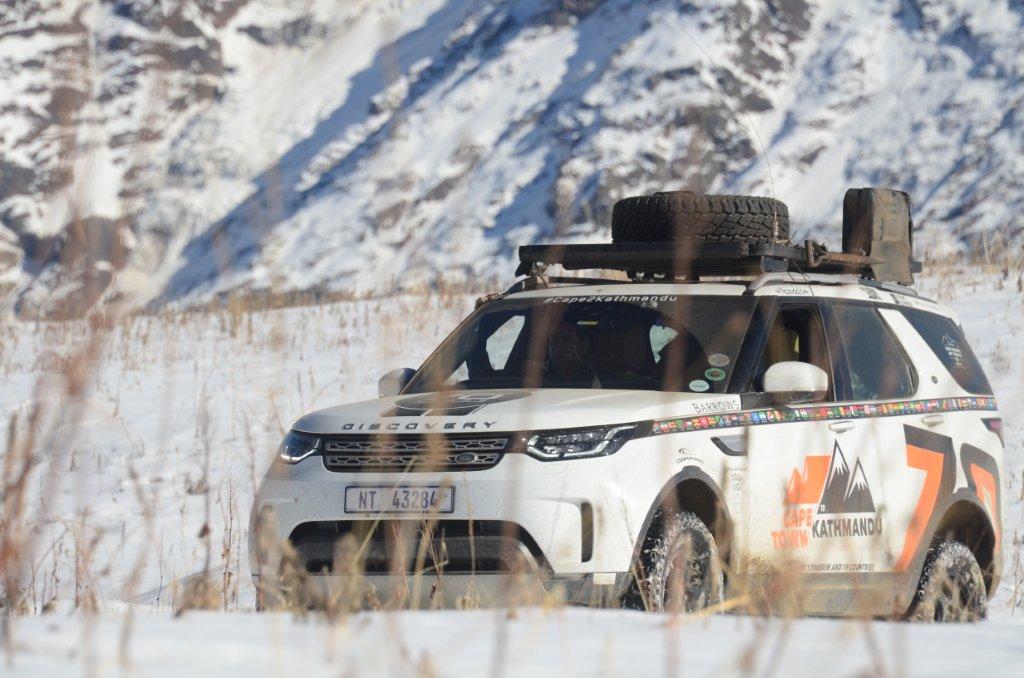 Brian Joss – The Land Rover Cape Town to Kathmandu expedition that left from Cape Town’s Nobel Peace Square on International Mandela  (July 18) has safely reached the border with Iran after traversing southern and east Africa and now across Turkey, Georgia and Armenia.

Expedition leader Ross Holgate said: “It’s been an incredible adventure so far and a world-first for the Land Rover Discoverys, as this humanitarian and geographic journey continues to make its way east towards Kathmandu in Nepal.”

Crossing the Bosporus Strait that connects Europe to Asia in the mysterious metropolis of Istanbul was a highpoint for the six-member South African team of adventurers, as were Turkey’s iconic UNESCO World Heritage Sites of Ephesus, Troy, Pergamon, Pamukkale, Cappadocia and the WW1 battlefields of Gallipoli.

Following the mountainous Black Sea coastline, the expedition set itself a new objective: to reach the highest permanently inhabited settlements in Europe, which lie in the northern Caucasus Mountains of Georgia near the border with Russia, before the first winter snows closed the challenging Zigara Pass.

Land Rover ambassador Kingsley Holgate said: “It turned out to be a fascinating chapter. High-altitude villages of Ushguli, with their stone-built watch towers nestling beneath Mount Shkhara, the highest mountain in Georgia and other grand, snow-capped mountains are out of a medieval fairy tale and added to the many Unesco World Heritage Sites already visited by the expedition.

“We’re Africans and the closest we’ve ever come to these conditions is in the Maluti mountain passes of Lesotho or the highlands of Ethiopia. As we’d been warned, the journey through mud, snow and ice was extremely difficult, but certainly proved the incredible capability of the Land Rover Discoverys and the heavily-loaded Defender 130.”

From northern Georgia, the expedition made its way south into Armenia, following ancient Silk Road mountain passes to stone-built World Heritage Site monasteries, through villages and mining towns reminiscent of the old days of Soviet occupation and enduring nights camping in sub-zero temperatures. Few, if any, South African-registered vehicles have ever reached these parts, but the waves and shouts of welcome from locals in their old Russian-made vehicles was heart-warming for the expedition team.

Apart from the three Land Rovers, one of the expedition members, Mike Nixon, who is also a member of the Land Rover Cape Epic mountain bike team, is cycling the journey to Kathmandu.

“It’s tough going,” said Nixon. “Especially the snow-clad mountain passes in Georgia and Armenia, where temperatures drop to well below zero and the occasional, fierce Armenian sheep dog gives you a run for your money.”

“Apart from the geographic challenges, this journey also has a humanitarian element and the people who we’ve met and have helped us along the way have been fantastic,”Ross Holgate continued. “There is a big Land Rover family of dealerships and clubs who have all bought into this expedition to celebrate Land Rover’s 70th Anniversary. Hundreds of well-wishers have added their goodwill messages to the Madiba100 Scroll of Peace and Goodwill, which clearly outlines the humanitarian work of Rite to Sight, malaria prevention, water purification and community conservation education that are attached to all Kingsley Holgate Foundation expeditions.”

A total of 123 days into the journey, on an overcast day at the border post between Armenia and Iran, underneath dark, brooding mountains, a large Islamic Republic of Iran flag flopping in the wind, the Cape to Kathmandu expedition team met up with a Russian Land Rover experience group also waiting to cross the border. There were shouts of welcome, mugs of coffee and photographs of the two teams. Here for the first time, messages of peace and goodwill were added to the Madiba Scroll in Russian and Farsi (Persian).

Africa has taught the team to be patient and seven hours later, after much paper shuffling and being shepherded from office to office, down came the entry stamp and the three Cape Town to Kathmandu Land Rovers crossed into
Iran.

“Ahead lies a 2000km journey through the deserts of Iran, a testing crossing of the Baluchistan region with armed Pakistani guards, then onto Lahore and Islamabad,”said Kingsley. “Then, the next geographic challenge will be the famous Karakoram Highway that traverses the Himalayas to China. Then on through India, and if the Zen of Travel is on our side, our convoy of Land Rovers will reach Kathmandu in Nepal by 11 December.”

CAPTION: Kathmandu here we come: Kingsley Holgate ready for the next challenge on the trip. Picture: Motorpress