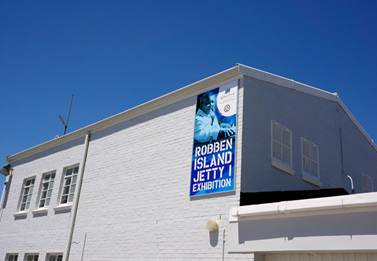 Did you know that the history of Jetty 1 dates back to 1870? The entrance to Table Bay harbour was deepened to 21 feet it is allegedly that prisoners were involved in this process.

Eight years later in 1878, prisoners from Robben Island were again used to widen Jetty No 1. In 1925 a portion of Jetty 1 was cordoned off for the exclusive use of Robben Island and the building still exists and is situated at the V&A Waterfront as a valuable landmark in the narrative of Robben Island Museum (RIM).

The history of Jetty 1 is as multifaceted as that of Robben Island itself. During World War II, the Isie was the only vessel that moved between the Island and the mainland transporting WWII staff, prisoners and prisoners of war. Then the ‘Robben Island’ berth was renamed the ‘Isie Berth’. Official ‘Robben Island Offices’ were constructed on Jetty No 1 in 1957.

Until the late 1990’s, the building at Jetty 1 retained its original façade of red bricks and wrought iron doors and barbed wire fencing, signifying its identity as a prisons building. When the Robben Island Museum opened its doors in 1997, the first tour ferries departed from this embarkation point. The building is currently used as an exhibition space and depicts an introductory narrative to the layered historical significance of the location as an embarkation point to Robben Island. The exhibition space consists of hand written visitor registration records – including that of when Winnie Madikizela-Mandela signed in to visit Nelson Mandela whilst he was incarcerated at Robben Island. Complete with real-life holding cells and an audio room, this is a compelling way to learn more about Robben Island and experience its full history before and after the political imprisonment period.

The Prisons Department used a small building on the corner of Quay 5 and Jetty 1 as the embarkation point for all vessels departing to and arriving from Robben Island. This is the point where most of the prisoners which were incarcerated on Robben Island were transported from. Needless to say, it also served as the departure point for the prison warders and their families whom lived on the island. The ferry departures were scheduled by the Prisons Department and when prisoners received visits from their lawyers and family members, this location is where they would report to and be screened before their departure aboard the vessels. Prisoners would on occasion be held in holding cells overnight if their arrival at the harbour did not coincide with the ferry departure. Similarly, when family members from elsewhere in the country and even Namibia were visiting prisoners and their arrival did not coincide with the ferry departure time, they would be assisted by the staff of Cowley House with overnight accommodation. Cowley House is an NGO which still exists today and they are based in Woodstock, Cape Town. They played a vital role in re-orientating prisoners and their families through counselling when prisoners were released from Robben Island.

“We encourage guests to visit Jetty 1 if they do not have time for the full tour or weather does not allow, by doing so they can get an understanding of political imprisonment and a first-hand account of our mainland museum that was the initial point of embarkation to Robben Island,” says Morongoa Ramaboa.

“Jetty 1 is an echoing reminder for many ex-political prisoners whose lives changed forever upon arrival at the Jetty. The heritage of Robben Island starts at Jetty 1 and as one progresses to the Island, one has a full understanding of the emotional torment that was endured by Ex Political Prisoner’s and their loved ones,” concludes Ramaboa.

For more information or to book your ticket with Robben Island Museum, visit their website: http://www.robben-island.org.za/

RIM is also responsible for managing and maintaining the assets of the Island. These include the Maximum and Medium Security Prison Complexes, Robert Sobukwe’s House, the Curio and Village Shops, the Village Precinct and associated recreational facilities, the Helipad and runway on the Island, World War 2 memorials, power generation and water processing plants, Jetty 1 and the Nelson Mandela Gateway at the V & A Waterfront, the Mayibuye Archives, the three (3) ferries that transport people to the Island and the fleet of buses used by tourists on the Island. For a tour overview and other interesting Island points, download our free App on Google Play and Apple iStore.