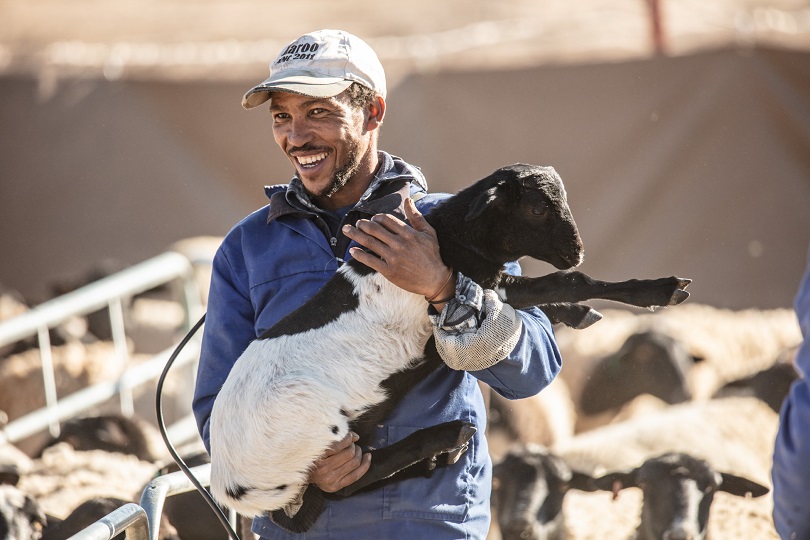 Farmers around the world are facing ever-escalating pressures to grow more food while preserving the world’s biodiversity.

To succeed, agriculture and biodiversity conservation efforts must walk hand in hand. Without biodiversity, there is no future for humanity. The air we breathe, the water we drink and the food we eat all rely on biodiversity, but right now it is in crisis – because of us.

Commercial livestock farming in South Africa and the way in which it has been done for generations has had an enormous impact on biodiversity and fauna and flora on the lands on which they are carried out. It is a well-known fact that when commercial farmers suffer livestock losses, more often than not the blame is put on predators such as jackal, caracal and leopard. Many farmers, for many years, have declared war on these predators and use all means of horrific & cruel methods to mitigate their losses; shooting predators on sight, the use predator-proof fencing, gin traps & poison bait that all have horrendous impacts, often killing harmless animals such as Bat-eared foxes, Aardwolf, Cape foxes, porcupines, large eagles and vultures too. The fact that the ‘problem’ remains despite these great efforts should speak for itself.

Managing livestock farms by killing apex predators has not only affected wildlife numbers and their natural systems, but has altered landscapes and put a great deal of pressure on our biodiversity. What does this mean for our future and can we stop it?

Bool Smuts, CEO of the conservation NGO, Landmark Foundation, believes he has pioneered a possible solution to this problem that could prove to be as beneficial to livestock farmers as it is to indigenous predators. The aptly named project, Shepherding Back Biodiversity, is the latest in a long string of conservation initiatives by the Landmark Foundation.

With the help of a generous philanthropist and funding from the Global Environmental Fund (GEF), a 24 000ha farm was purchased in the Karoo near Beaufort West in 2015 and a farming model that involves re-thinking how rangelands are managed has been rolled out since. Rather than using the traditional fenced ‘camps’, where a large ranch is divided into many smaller ‘camps’ and livestock are periodically moved from one to another and generally left unattended for months with ample opportunity for predators to strike and detrimental effects on grazing, the Landmark Foundation have, simply put, brought back farming methods of the historical past. Temporary, portable kraals are erected and paired with trained human shepherds. Livestock (presently cattle and sheep) are shepherded to suitable pastures by day, and then back to the security of the kraal, come nightfall.

The magic of the method lies in the shepherds. More than mere guardsmen, they are experts in their craft, guiding livestock to appropriate grazing sites and moving them to new pastures when the time is right. They are trained to monitor the condition of the most palatable plants in the veld, so that they can avoid overgrazing and degradation of the natural vegetation. When an area has been optimally grazed, the kraal is simply disassembled and moved to the next area, allowing farmers to do away with patchwork camps altogether. The removal of camp fences is one of the obvious environmental gains of the system.

This shepherding method has had numerous benefits, most notably the fact that in the 3 year pilot period, not a single head of livestock has been lost to predators. With the livestock being moved at regular intervals, a natural migration cycle on the land has been re-established, the vegetation is not overgrazed, the land is heavily manured which has ultimately seen a healthy regrowth, rapid regeneration of flora and even the return of much wildlife- a concept known as ‘rewilding’.

There have been huge benefits for humans too. “The project has created stable jobs for rural workers”, said Bool Smuts, “allowing them to learn a skilled trade, enjoy long-term employment as expert herders and to be admired with elevated status.”

Working to role out this farming model further, the initiative has also developed a herding academy, a research site involving 6 different research institutions, several research projects and a brand scheme development known as Fair Game– wildlife-friendly, ethically sourced rangeland meats. “I believe that this, in particular, will drive the project’s success” said Smuts. “With an ever-increasing number of consumers wanting to buy meat without guilt, and prepared to pay a premium for it, farmers are given an incentive for adopting predator-friendly farming practices.”

In the words of Gerald Durrell: “The world is as delicate and as complicated as a spider’s web. If you touch one thread you send shudders running through all the other threads. We are not just touching the web; we are tearing great holes in it.” But like a spider does, we can also rebuild the threads, making new connections between agriculture and biodiversity conservation. That time is NOW!

The Landmark Foundation will launch the Fair Game Wildlife Friendly Products brand  to the media on their pilot site farm near Beaufort West on the weekend of 23 – 25th November 2018. Landmark Foundation hereby invites discerning journalists to come and witness the project. The objective of this is for journalists to first-hand witness the impact of the brand effort on land management in the hope that some media interest can be generated and support can be generated amongst consumers to support the brand.