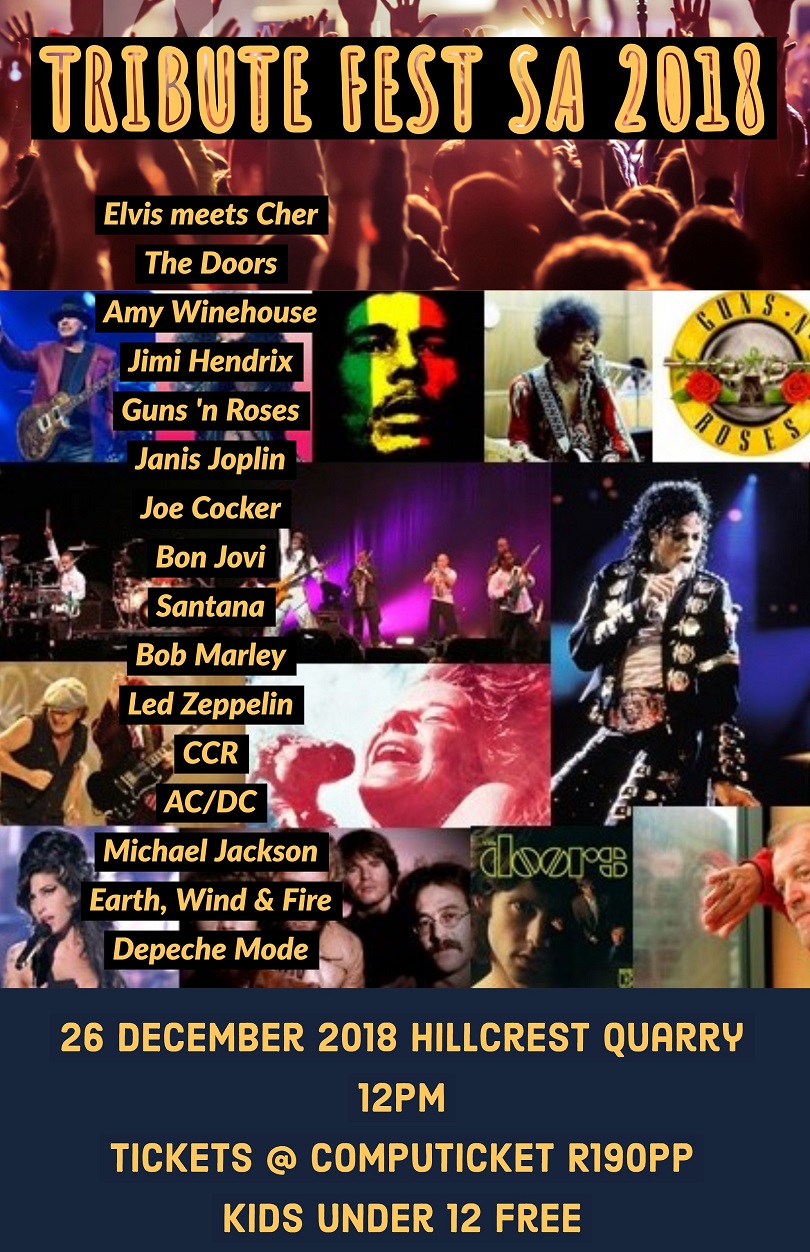 The fifth annual Tribute Fest features a phenomenal line up, including some exciting new acts to bring you 12 hours of music to pay tribute to some of the greatest musical legends of all time.

The bands that will be performing to honour the likes of Elvis, Cher, Bon Jovi, Santana, Led Zeppelin, Bob Marley, Bon Jovi, Michael Jackson and many more are Patrick Canovi and The Kiss the Sky band, Mark Haze, The Rivertones, Music for the Masses, Riaan Steyn, Lance Jackson, Back in Black, James Marais and Monique Cassells and various other collaborating artists.

Patrick Canovi who will be heading up the tributes to Santana, The Doors, Jimi Hendrix,  Joe Cocker, Janis Joplin and more, started doing “Rock Legends Tribute Shows” under the name of “Patrick Canovi’s “Kiss the Sky” Show Band” back in 1994. Canovi says it all started when he was approached by the then management of the River Club to do a Jimi Hendrix Tribute Show. “Since he was the highest rated guitar player in the world, the challenge appealed to me, so I dived in and went all out to master all his best works. The show, which I called “Kiss the Sky” was meant to run for 2 weeks, but it ended up being packed out for 7 months!  People referred to us as Patrick Canovi’s “Kiss the Sky” Show Band, and it just stuck from there. I followed it with the “Led Zeppelin” Tribute Show and have been doing these rock tribute shows ever since. Canovi and his band will also be collaborating with Mark Haze for a powerhouse tribute to Led Zeppelin.

Haze will also be rocking out a tribute performance to Bon Jovi. He says: “Bon Jovi was one of my favorite bands growing up. Their music has always influenced my thoughts and I guess I really relate to what they’re singing about. I like to think that it’s because of my great respect for them that it translates well when I pay tribute to them on stage. The audience and I really connect.”

James Marais has developed the reputation of being South Africa’s no. 1 Elvis Presley tribute artist.  Elvis has been James’ top musical inspiration since his childhood, and he has since worked on duplicating Elvis’ singing style, famous moves on stage, as well as his iconic look. Marais will be joining forces with accomplished vocalist Monique Cassells to introduce their new show “Elvis Meets Cher.”

Lead vocalist of the group Music For The Masses, Otis, says that they have tried to maintain the essence of what Depeche Mode is about in their live performances to honor this legendary group. “Its electronic rock. It has balls without the burning of guitars and trashing of hotel rooms. It defined a generation where it was cooler to wear eyeliner and black than ever before. We have made every effort to create and bottle the essence of the Depeche Mode concert approach. We perform their songs as close as possible to the originals, having sampled most of their loops and hooks and have even created our own dance remixes of some of the songs.”

Join these talented artists at Hillcrest Quarry on Boxing Day, 26 December, and let the old year`s hair down with your favourite all time rock and roll tunes!