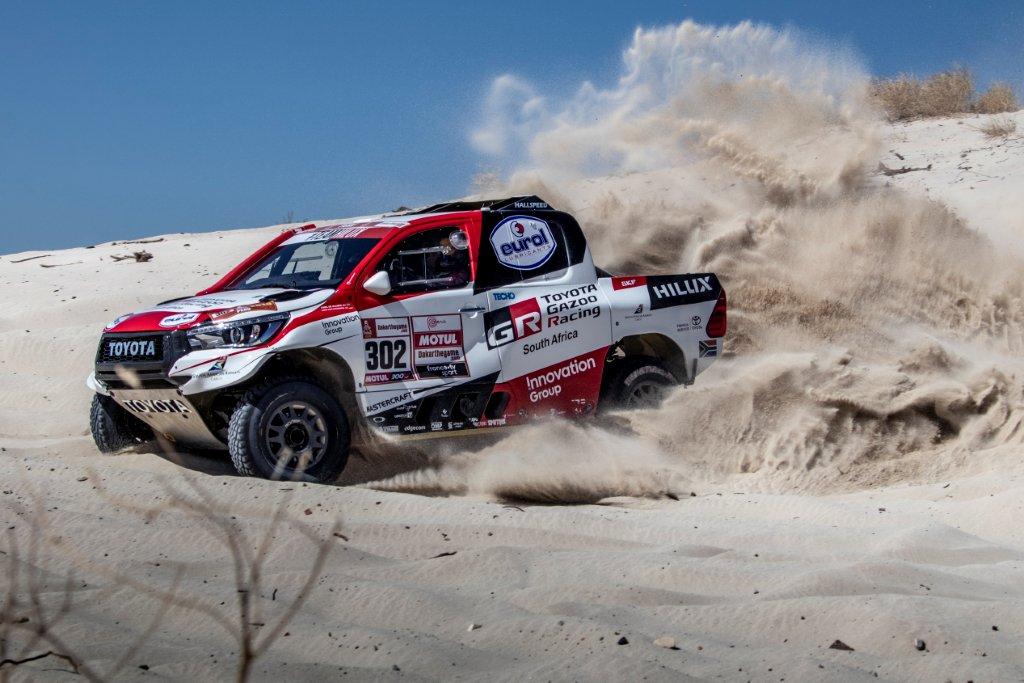 Brian Joss – Toyota Gazoo Racing SA’s team for Dakar 2019 was announced at the WRX event at the Killarney Raceway in Cape Town at the weekend.

The three-car team will be fielding the latest evolution of the race-proven Toyota Hilux in South America, when they tackle the world’s most grueling automotive race in January 2019. This builds on a legacy that started in 2012, when Toyota SA Motors first fielded a team at the iconic race.

As has been the case since the first South African Toyota Hilux took on the Dakar in 2012, Giniel de Villiers will be behind the wheel for 2019. He will again partner with German co-driver Dirk von Zitzewitz for the upcoming Dakar Rally – a race they won together in 2009. Since that victory, the pair have notched up five podium finishes for Toyota, and will be aiming to add to that record in 2019.

De Villiers recently won his second consecutive South African Cross-Country Series title, again with co-driver Dennis Murphy beside him in the Toyota Hilux. Between De Villiers and teammate Henk Lategan, Toyota has maintained an unbeaten race-winning record in the local series since 2015.

As in 2018, De Villiers/Von Zitzewitz will have Qatar’s Nasser Al Attiyah and French co-driver Mathieu Baumel as teammates. The pair have become familiar faces in Toyota Gazoo Racing SA colours, having fielded a South African Toyota Hilux in Dakar 2017 and 2018; as well as the FIA’s World Cup for Cross-Country Rallies – a title that the pair has won three times in a row, twice in a Toyota Hilux. Al Attiyah/Baumel also won this year’s Rally of Morocco in a Toyota Gazoo Racing SA Hilux, making it five wins in a row on the extremely tough event.

“To me the new version of the Toyota Hilux is probably the best race car I have ever driven,” said Al Attiyah after winning in Morocco. “It can handle the tough stuff without any problems, and it just keeps getting better with each evolution.”

The third crew in this year’s Dakar line-up will again be the flying Dutchman, Bernhard ten Brinke. Partnered with Michel Périn in 2018, the man from Holland proved his mettle by running in the Top 5 throughout the event, the revelation of the 2018 edition. The pair also won the fearsome stage at Fiambala – one of the toughest tests on recent Dakars – showing just how good Ten Brinke is. But in a cruel twist of fate, a rare engine problem, on the penultimate stage of the race, stole their thunder. Now Ten Brinke is back, with a new co-driver beside him.

“Michel was excellent in the car, and he really helped me to go as fast as possible,” said Ten Brinke of the change. “But he has decided to retire from racing, and I’m excited to have Xavier Panseri beside me this time.”

Panseri (France) is no stranger to racing, having done duty mainly in rally cars over the years. He also competed in Dakar 2015 with Polish superstar Krzysztof Holowczyc, finishing the race in third place overall.

All three crews will be fielding the latest evolution of the Toyota Hilux, which saw a major revamp for Dakar 2018. The car was updated with a mid-engine layout and new suspension geometry for that race, and has been refined through testing throughout the year.

“The SACCS serves as our main test bed during the year, and the data that is gathered by our two crews during the six-round championship is invaluable to our Dakar efforts,” explains Toyota Gazoo Racing SA Team Principal, Glyn Hall. “This year we’ve also competed in Qatar and Morocco, and learnt a great deal during these two races.”

While there have been further refinements to the engine, suspension and overall weight of the car during 2018, a key factor for Dakar 2019 will be the size of the air intake restrictor, which has been set at 37mm for the race.

“The FIA has been working hard to try and balance the performance of the turbodiesel-powered cars and the naturally aspirated V8s, such as ours,” explains Hall. “This is an ongoing process, and while neither camp will probably ever be entirely happy with the rules, we have no choice but to abide by their rules. The smaller restrictor is sure to count against us somewhat this year, but with the lower altitudes of Peru, we may just have enough grunt to make it work regardless.”

With that said, the bulk of Dakar 2019 is set to take place in soft sand, which tends to sap the Toyota V8 engine of power. On the flip-side, there are no real high-altitude stages planned for 2019, which may help when it comes to overall performance.

The team has also welcomed a new partnership with Dutch oil company Eurol, who has previously supported Bernhard ten Brinke both in the Dakar and on other races. This year, however, all three Toyota Gazoo Racing SA cars will include Eurol branding as part of their overall livery, and the team is proud to be associated with the brand.

The race will start and finish in the Peruvian capital of Lima, with ten stages taking the crews on a massive loop through the southern section of the country, before finishing back in Lima on January 17th, 2019.

“There’s no doubt about the toughness of the Dakar Rally,” concludes Hall.

“Even in just one country – Peru – there will be plenty of challenges, including the terrain, navigation and temperatures. But we love a challenge, and relish the opportunity to go for glory come January.”

The 2019 race will be the 41st edition of the Dakar Rally, and over the years the race has visited 29 countries – three in Europe, five in South America and 21 in Africa. It is the second-largest motorsport in the event, eclipsed only by F1. This year will see crews from 54 nations competing, with 523 competitors already registered. This number includes 188 bikes and quads; 103 cars; and 44 trucks.  In the end the race will broadcast 1,200 hours of TV across 70 channels in 190 countries, supported by nearly 2,000 accredited journalists.

“The extreme challenges offered by the Dakar Rally remains a great fit for the Toyota Hilux,” says Calvyn Hamman, Senior Vice-President of Sales and Marketing at Toyota SA Motors. “The race continually provides us with a platform to showcase the undeniable toughness and reliability of the Toyota Hilux, and we are confident of seeing our crews on the podium on this 41st edition of the race.”

Toyota Gazoo Racing SA will be fielding a three-car team for Dakar 2019, the 41st edition of the iconic race. The race gets under way on January 6th, 2019, and will see stalwarts Giniel de Villiers partner with co-driver Dirk von Zitzewitz; while Qatar’s Nasser Al Attiyah will drive with Frenchman Mathieu Baumel beside him. Dutch rally and cross-country driver, Bernhard ten Brinke will have Xavier Panseri (France) doing duty as co-driver.

“Our team for Dakar 2019 is largely unchanged from 2018, with the exception of Bernhard’s new co-driver. This gives us great stability in the team, and their performance during Dakar 2018 certainly showed what all three are capable of,” says Toyota Gazoo Racing SA Team Principal, Glyn Hall. “Both Giniel and Nasser have won the event in the past, so the know exactly what it takes. And Bernard’s pace was simply electric during the previous event, so we’re full of confidence for the upcoming race.”

Driver Giniel De Villiers has become a household name in many parts of the world, thanks mainly to his victory in the 2009 Dakar Rally. However, the quiet Stellenbosch racer has also notched up numerous championships in a wide variety of racing disciplines, including the 2017 and 2018 South African Cross-Country Series titles. De Villiers has raced in 15 Dakars to date, and only finished outside the Top Ten on one occasion (2007, due to an engine fire). He has recorded eight podium finishes on the Dakar Rally, five of those behind the wheel of a South African Toyota Hilux.

Navigator Dirk Von Zitzewitz first started navigating for De Villiers in 2007, though his Dakar record stretches back to 1997, when he first took park on a motorcycle. He finished fifth in his debut year, and seventh in 1998. The next edition saw him record several stage victories, though he failed to complete the event. He then turned his hand to navigation, partnering with Americans Mark Miller and Robby Gordon, before teaming up with De Villiers. The pair won the 2009 Dakar Rally, and have remained together ever since.

The world of cross-country racing has been dominated by driver Al Attiyah for the last four years, as the Qatari star won the FIA’s Cross-Country World Cup in 2015, 2016 and 2017 – the last two behind the wheel of a South African Toyota Hilux. He has won the Dakar Rally twice, most recently in 2015 (MINI), and has also competed in the World Rally Championship, Complete World Touring Car Championship and a multitude of other global race series.

The affable racer is also an accomplished Skeet Shooter, and won a bronze medal at the 2012 London Olympic Games. He won the Rally of Morocco for a record fifth consecutive time in 2018.

French navigator Mathieu Baumel has partnered with Al Attiyah on many occasions, and have notched up three FIA Cross-Country World Cup titles with the Qatari superstar. Baumel, who hails from Manosque in France’s Luberon region, specializes in cross-country racing as well as rallying, and recorded his first title in the Dakar Challenge of 2005. Since then, the approachable Frenchman has notched up six championships in a variety of disciplines, including the 2015 Dakar Rally, WRC2 class of the World Rally Championship and the FIA World Cup.

Sports fanatic driver Bernhard ten Brinke hails from the Dutch town of Zeddam, where he was born on 6 September 1977. The experienced businessman owns an established kitchen company in the Netherlands, but his true passion lies with sport – and more specifically, motorsport. Ten Brinke has been racing since 2004, cutting his teeth on the Renault Clio Sport Cup circuit, before adding rallying to his experience in 2009. He made his Dakar debut in 2012, finishing in a highly credible eighth place, with navigator Mathieu Baumel beside him. In 2014 Ten Brinke joined Overdrive Racing, and significantly expanded his cross-country racing experience the following year. He finished Dakar 2015 in seventh overall, suffered a DNF in 2016 and focused on his rallying in 2017, missing out on the Dakar Rally as a result.

He suffered another DNF in Dakar 2018, but recorded an epic stage win at Fiambala, and was on course for a podium finish until the penultimate stage of the rally.

Navigator Xavier Panseri, 43,  is no stranger to the hotseat of a race car, having read plenty of pace notes in his time. The French national has done duty with countryman Bryan Bouffier since 2007, and won the Polish Rally Championship three consecutive times with him. The pair have also racked up wins in Monte Carlo and Corsica; and Panseri won the 2010 Navigator’s Championship in France. He also competed in the 2015 Dakar Rally alongside Polish superstar Krzystof Holowczyc, with the pair finishing the grueling event in 3rd place overall. Dakar 2019 will be his first Dakar with Ten Brinke, though the pair competed together in the Rally of Morocco during 2018.

Toyota Gazoo Racing SA will be fielding the very latest version of its race-proved Toyota Hilux at Dakar 2019. This latest evolution represents the pinnacle of development, which started with the very first Toyota Hilux Dakar challenger in 2012. That car achieved a second place overall on debut, and the last six years has seen incredible advances in the car.