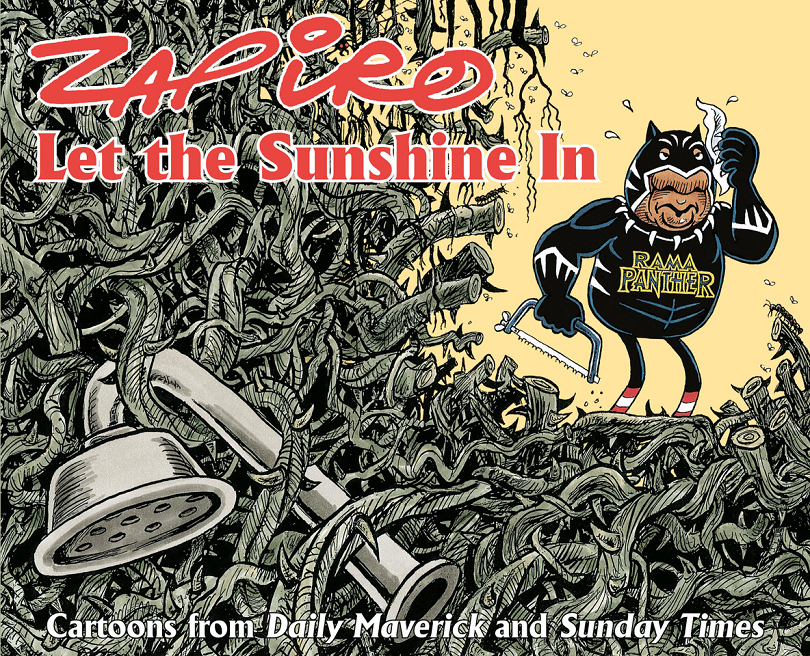 Zapiro (Jonathan Shapiro) this year won the Standard Bank Sikuvile Newspaper Award for Editorial Cartooning, his ninth award in this competition since 2003. The judges cited him as “the country’s sharpest wielder of a cartooning quill”.

And it’s easy to see why in the 23rd annual collection of cartoons. Everyone of any consequence and even those of no consequence get to feel the barbed point of Zapiro’s quill, from Jacob Zuma, who gets the showerhead back, and upwards. To name some, Markus Jooste, the CEO of Steinhoff, the man behind South Africa’s biggest corporate scandal;  MultiChoice who paid millions to the SABC and to the Guptas for their ANN7 TV channel; Cape Town Mayor Patricia de Lille and her battle with the DA; the Life Esidimeni facility where 144 mentally ill patients died after the Gauteng Heath team moved them to inadequately staffed NGOs; the death of Winnie Madikezala-Mandela, leaving behind a complex and contested legacy; Judge Raymond Zondo’s commission of inquiry into State Capture.

An apt cartoon is one showing a Parktown Prawn, with the caption, ‘I used to be Parktown’s most hated, vile creature atop a billboard with a picture of the Gupta brothers outside Hill on Empire where the hearings are being held and a bubble, saying, ‘not anymore!’.

There is also a cartoon of a snivelling Malusi Gigaba asking, ‘How Could I Know I was being used by the Guptas?’. Another cartoon is of Harvey Weinstein, the movie mogul, who faced a barrage of sexual assault and harassment charges, and of course, there’s Jacques Paauw’s book, The President’s Keepers and Mark Minnie, who, with investigative journalist, Chris Steyn, wrote the horrifying expose, the Lost Boys of Bird Island.

The captions are by Mike Wills and his comments are pithy and to the point.

Let The Sunshine In will remind you of some of the best of times and worst of times in 2018. Sadly the bad times far outweigh the good.