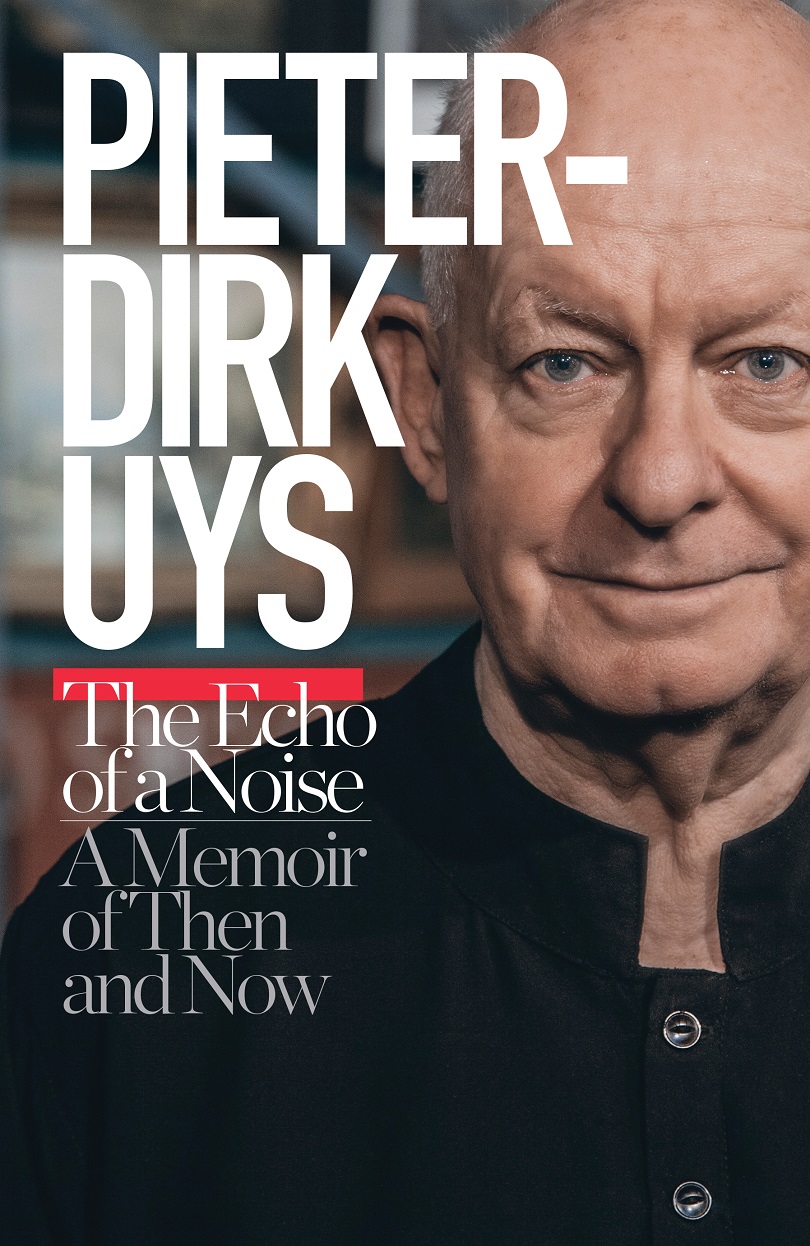 A Memoir of Then and Now

There is much more to Pieter-Dirk Uys, one of our ace satirists and playwrights, than the face of Evita Bezuidenhout (who was) the most famous white woman  in South Africa, until she was put into mothballs not too long ago. Uys has published two other memoirs, Elections and Erections (2002) focusing on Aids, and Between The Devil and the Deep (2005) which put the spotlight on his theatre career.

Uys, who stays in Darling, and owns the train station, Evita se Perron which has been transformed into a theatre and a museum, visited the West Coast  as a child, never dreaming that he would one day settle there. Visiting Boerassic Park, as the museum is called, is like taking a trip back in time with some painful reminders of the dark days of apartheid. Can they be anything else, except dark.

In The Echo Of A Noise he unpacks the raison d’être for bringing Evita Bezuidenhout to life and then putting her in quarantine. The creation of Evita Bezuidenhout was an anarchic response to the excesses of the apartheid government and the then Publications Control Board, a panel of Calvinistic judges who banned anything and everything that they deemed harmful to the South African way of life. And Uys was always a thorn in their side. He recounts in detail his long-running battle with grey-suited censors. He beat them in the end by following his father’s advice who joined the control board when Uys challenged him. In those days it was illegal for men to wear women’s clothing, it was considered a crime, and prison was the likely result. Evita got her name from two people, the editor of the Sunday Express, for whom Uys wrote a weekly column where he reflected on the madness of the Information Scandal as it unfolded, and from the musical of the life of Evita Peron of Argentina which had just hit the box office. Uys read her biography and knew that he had a blueprint for Bezuidenhout. The Afrikaans tannie from Pretoria, was able, through the column, to  condemn the National Party in the most gushing terms. Her surname came from a poster for The Seagull starring Aletta Bezuidenhout at the Market Theatre in Joburg. Uys as Evita has had her 15 minutes of fame. However, I suspect, she will be back soon.

Uys grew up in Pinelands with his father, Hannes, with whom he had a conflicted relationship, his mother, Helga Basel, his sister Tessa, the child prodigy who is now an internationally renowned pianist, and his “second mother”, Sannie Abader, who worked at Sonskyn, the Uys’s house in Homestead Way. Long after he left home and settled in Darling he invited Sannie to Darling for the weekend and he had planned a full itinerary for her. Two of Uys’s friends fetched her in their Jaguar. However, the weekend didn’t pan out as expected.

Uys also remembers the first democratic election: April 27, 1994. On that day, a turning point in the country’s history, he stood in line with Sannie Abader, who was dressed to the nines, and her long-time friend, Ant’ Leen, who in her finery,  looked like the Queen Mother, to cast their vote. In the queue at the polling station Ant’ Leen realised she had forgotten to put in her false teeth and she refused to enter the hall. “Toemaar,” Sannie said, “you can borrow mine.” So Sannie went in to vote and when she came out she surreptitiously slipped her teeth to Ant’ Leen, who went into make her mark. She came out with a wide, toothier smile. She had just voted for the National Party. It was Sannie who had prepared him for that moment, helping him break down barriers of fear and the superiority he took for granted, and helping to feel less white, Uys writes.

Basel, Uys’s mother was Jewish and a gifted musician, was officially notified by the Reichsmusikkammer that she may no longer play the piano anywhere in Germany “because she was a Jew”. On the advice of her then fiancé, a geology professor at Berlin University, Franz Michels, not Jewish, she took her Bluther and fled the Nazis to settle at the southern tip of Africa. There is an interesting story too about the piano. It  was only after she committed suicide in Cape Town that the satirist learnt of her ancestry. Uys writes that he regrets not asking Helga about her life when she was still alive. It also shows what can happen when people are treated like the other. Now he enjoys putting it on his CV: “Jewish-Afrikaner, belongs to both chosen people”. Uys also had a matriarchal grandmother , his “Paarlse ouma” and his German Oma, who baked delicious strudel.

Uys describes in some detail about his relationship with Hannes and his Kinder-Sang choir. Although his father suspected he was gay, and Uys was called a “moffie” at school they didn’t speak about it except once, when he asked Hannes what a homosexual was. Uys writes very movingly about his father’s last  days, when Sannie moves in to help ease his suffering. Uys finally gets to open the “top drawer” that holds the family legacy and other important documents.

The book also includes Uys’s recollections about his time at the London Film School in Covent Garden where he presented his first play, Faces in the Wall, and how he packed his bags to come home after accepting an offer from Bryan Astbury and Yvonne Bryceland to join them in the Space, a non-racial theatre they were starting with Athol Fugard in Cape Town.

Uys has walked with kings and queens, presidents and movie stars, among them Greta Garbo and Sophia Loren, the Italian actress with whom he built a long-lasting relationship which endures to this day. Former president Nelson Mandel was a big fan; PW Botha not so much. Uys also has some pithy comments about the present day government. He describes them as careless. They knew what had to be done but they didn’t. “The apartheid government killed people, the ANC government just lets them die. The Thabo Mbeki era left 380 000 people dead of Aids, a victim of his carelessness.  Some 50 million jobless South Africans raise the spectre of a Mad Max scenario,” Uys warns.

To fight racism, one has to reflect racism to remind a generation of ‘formers’ that former words used contemptuously to describe others can no longer be used carelessly by anyone, he says.

The Echo Of A Noise reflects the highs and lows, the sadness and joys of one of South Africa’s icons, who experienced the jackboot of the National Party government and lived to see the dawn of democracy which hasn’t turned out the way he hoped.