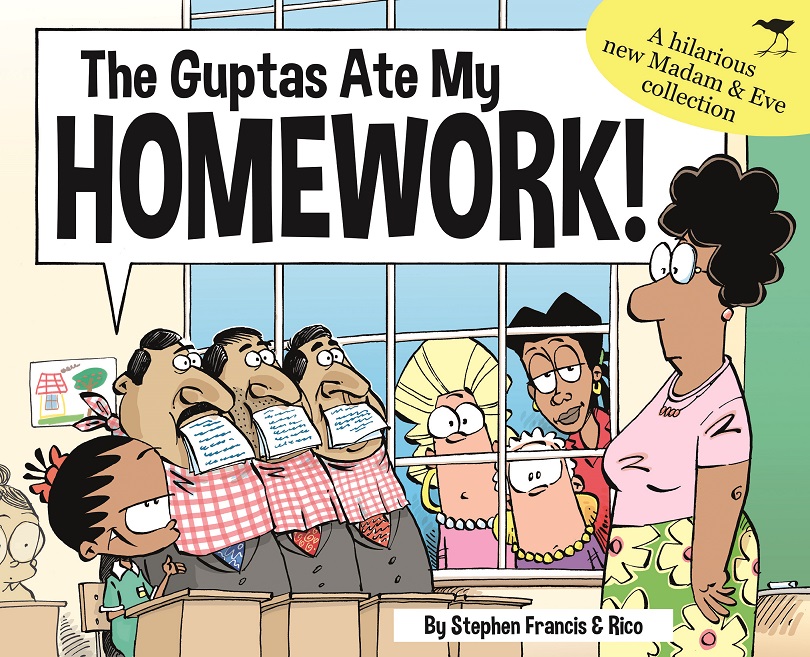 The Guptas were perfect fodder for the sharp point of the cartoonists’ pen and Stephen Francis and Rico, the creators of Madam & Eve which was first published in 1992 in the Weekly Mail, now the Mail and Guardian, are no exception. The strip has appeared in numerous publications across the world including Finland, Denmark and Sweden, not to mention South Africa in the Star, Cape Times and the Namibian, to name a few.

No one is spared in the new collection: not Julius Malemal former president Jacob Zuma; former director of the National Prosecuting Authority, Shaun “the Sheep” Abrahams; the SARS former commissioner, Tom Moyane; the drought in Cape Town; Eskom, the cheating Australian cricketers; Telkom; Grace Mugabe; Robert Mugabe;  Malusi Gigaba;  the SABC and Cyril Ramaphosa, to name some. In fact, whatever and whoever made the news headlines, Francis and Rico covered it. Their cartoons are gentle, but they sting just as hard as Zapiro’s, for example.

Stephen Francis & Rico also came up with a few South African collective nouns. Among them, a capture of Guptas; a leak of emails; a Grace of extension cords and a corruption of ministers. The Guptas Ate My Homework would make a great Christmas gift or for anyone who is interested in politics or who would enjoy a chuckle or two, with a prick, just to remind you of the year that was.