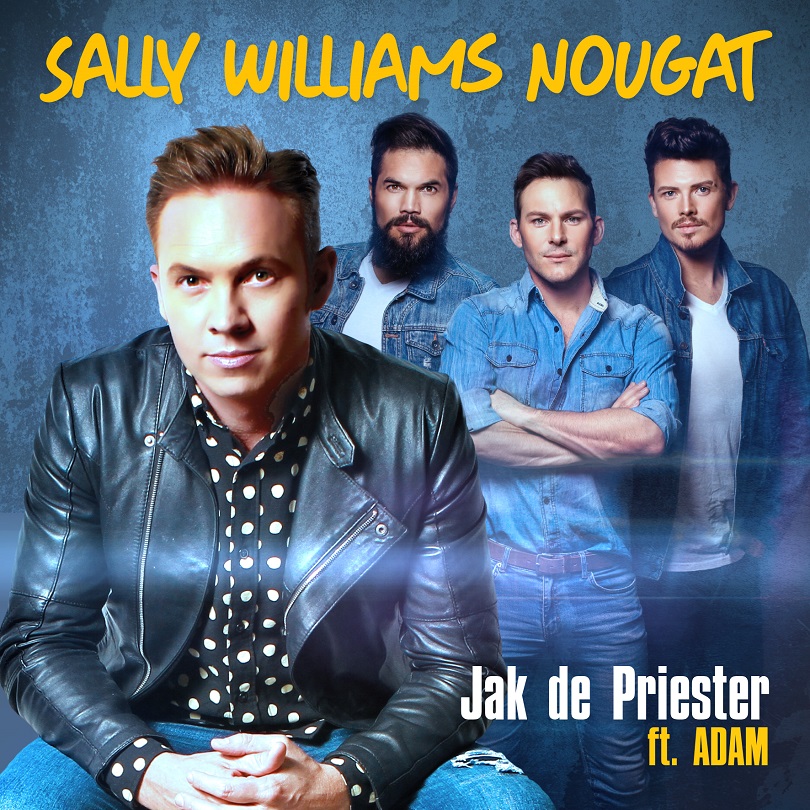 SALLY WILLIAMS NOUGAT is not only the hit that officially launched acclaimed singer, songwriter and poet, Jak de Priester’s music career fifteen years ago. It is also a song that means the world to him, because it is literally a chapter taken from his own love story.

“Long ago, my girlfriend introduced me to Sally Williams Nougat at the Groenkloof Spar, which was not far from the garden cottage I used to live in. We always bought and ate it there, so it is a bit of a romantic thing. She then decided to go to London for two years and I stocked her suitcase with a lot of Sally Williams. On the evening we said our goodbyes at the airport, I was devastated and went home where I wrote a song about everything that we had done together. That is what the song is about… it is a song about missing the one that you love,” reveals the artist about the meaning behind his debut single.

Now, years later and in celebration of Jak and his wife, Michelle’s (the girl he misses in the song) tenth wedding anniversary, the singer has decided to rerelease a brand new version of his greatest hit with the help of the pop trio, ADAM.

“My voice have developed a lot since sixteen years ago when the song was recorded for the ATKV Crescendo Competition. Because it is possibly going to be the song that I am remembered for, I decided to record a new rendition that is more current. It is also my anniversary gift to the woman I have been married to for the past ten years,” Jak explains. “Hugo Ludik and Vaughan Gardiner produced the new track. Hugo is a member of ADAM. While we were busy recording, we realised that it could be great to add some extra harmony to the new track, which is something that ADAM specialises in. As we progressed, we decided that the group should be even more involved and that is how they officially became part of the song.”

ADAM, consisting of Hugo Ludik, Reynardt Hugo and Kyle Grant, is one of the most popular pop groups in the country. Three of their albums ADAM (2011), Vir Jou Gemaak (2012) and Goud (2012), reached gold status. In 2014, the group’s single, Sal Oorlog Vir Jou Maak, shot to fame after being included on the soundtrack of local box office hit, Pad Na Jou Hart. The song was not only a hit on various radio stations, but also received a Ghoema Award for Song of the Year as well as a Huisgenoot Tempo nomination in the same category. In addition, they have been awarded Ghoemas for Best Newcomer (2011) and Group of the Year (2015). Their album, Hoogtevrees also won two Ghoema Awards in 2017 (Group of the Year and Best Album by a Group or Duo) and a SAMA Award for Best Pop Album. The titular track, written by Hugo and Reynardt, topped the music charts of some of the biggest radio stations in the country.

About the opportunity to collaborate with Jak de Priester on reviving one of his biggest hits, founding member Hugo Ludik says: “All three of us grew up with this song playing an important role somewhere in our lives. It is a huge honour to be part of the revival of one of the greatest hits in Afrikaans history. Jak wanted to create a rendition of SALLY WILLIAMS NOUGAT that included elements of modern day pop music. We are very excited about the sound, emotion and style of the new single and hope that it captures the hearts of fans, especially younger listeners, all over again” The group’s latest album, Bewe, was released at the beginning of 2018 and was very well received. They are working hard at reaching as many new listeners as possible with their music.

Aside from the success he has achieved with SALLY WILLIAMS NOUGAT, which was included in the FAK Songbook, Jak is also known as the singer and lyricist behind various kykNET television shows and films, including popular soap opera, Binnelanders, 10 uit 10, Hoener met die Rooi Skoene and Reis na Gister, of which he is also the presenter. The season has already been running for five seasons and secured him a nomination for Television Presenter of the Year in 2015.

In celebration of his thriving career, he released his ninth studio album, 15 JAAR (15 Years), in 2017 which included some exciting collaborations with artists such as Steve Hofmeyr, Dr Victor, Bianca Pelser, Koos Kombuis and Charl du Plessis (the pianist). Soen die Reën, a heartfelt duet with Steve Hofmeyr, had 107 000 views within the first twenty four hours after it was released on Vimeo and caused quite a stir on social media.

The singer is currently busy with preparations for his Geel Jou Hart Vir Liefde Show, which will be taking place in Cape Town and Gauteng at the end of the year. “The December we will be collecting pet food for the SPCA. There will be five shows in Cape Town, at Die Boer, and six at Die Blou Hond in Pretoria!,” he shares. Furthermore, he is also working on his first art exhibition, titled On A Different Planet, which is scheduled for February 2019 and will include twenty of his own original pieces.

Jak de Priester and ADAM are very excited about sharing the new and improved version of SALLY WILLIAMS NOUGAT with South Africans on 16 November 2018 and promises that it is going to exceed the success of its chillingly beautiful predecessor. “I hope that listeners will be able to experience the nostalgia of the first release when listening to the new song, but also be able to enjoy it in its new format,” Jak concludes.