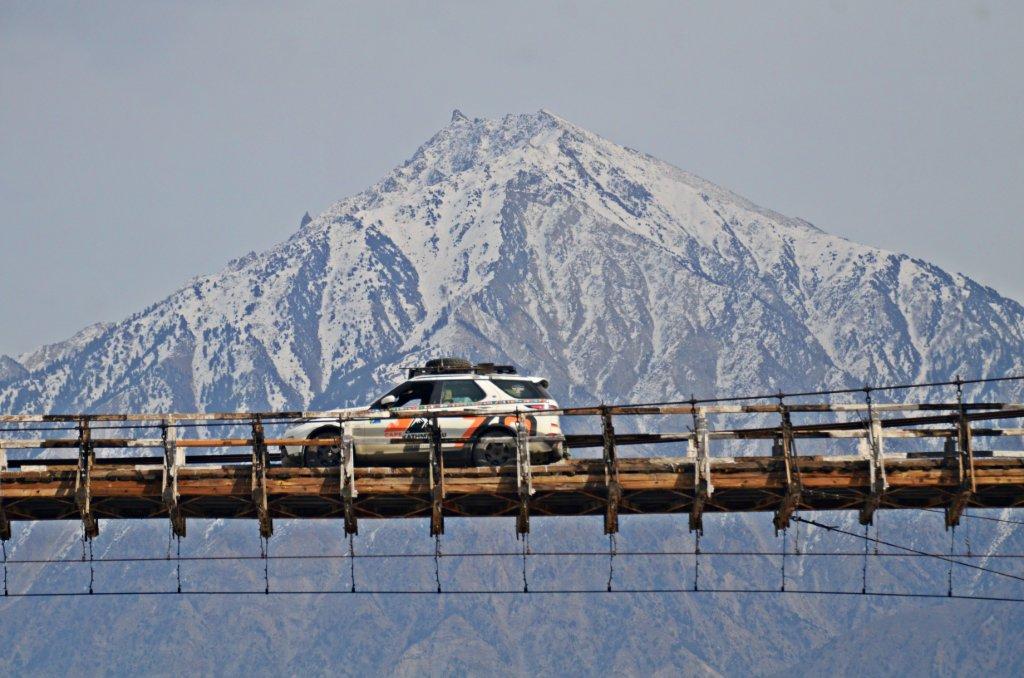 Brian Joss – Kingsley Holgate and his Cape Town to Kathmandu expedition team have realised a dream by finally reaching one of the highest paved roads in the world with their Land Rover Discoverys.

With a maximum elevation of 4,714 metres, the Pakistani Karakoram Highway and its treacherous passes is often referred to as the Eighth Wonder of the World.

It’s here on this ‘Roof of the World’ where the three highest mountain ranges on the planet collide – the Himalayas, the Hindu Kush and the Karakorams. This is the fabled Shangri-La (The Kingdom of Lost Horizons) – a land of snow leopards, bears, apricot orchards, stone-built villages and hardy people. The area plays home to vast glaciers, alpine deserts and 33 of the highest mountains on Earth, like the snow-covered 8,126m peak of Nanga Parbat, Pakistan’s second-highest mountain after the 8,610m ‘Killer Mountain’ of K2, which is only exceeded by Mount Everest.

“For months we’ve dreamed about achieving this major expedition objective,”said Holgate. “It’s a long, fascinating and sometimes arduous journey of mountain passes, tunnels, wash-aways, and landslides. We find ourselves squeezing past colourful, jingling Bedford trucks; the Landys’ tyres just millimetres from the edge of dizzying drops into steep gorges where the green waters of the Indus River tumble and meander. We’ve met police checkpoints and travelled in convoys, all flavoured with the friendliness of the amazingly tough Baltistan people who inhabit this rough mountainous region which through centuries of the Silk Road trade, has linked northern Pakistan to China.”

Near the picturesque Hunza Valley, Kingsley and crew broke away for some tough off-road sections of the ancient Silk Road. It’s yet another high-altitude test for the expedition’s two Discoverys which haven’t missed a beat. The Discovery’s 283mm ground clearance has been key in tackling the rocky conditions, while the multi-mode Terrain Response 2 has allowed the team to adapt the vehicles’ settings to varying terrain – some of which is more easily passable by goats than cars – with a simple turn of a knob.

But the Karakoram Highway will soon be unpassable by any vehicle. A new, faster highway is being built through these mountains by the Chinese to quicken the transportation of goods to the Port of Karachi on the Arabian Sea.  The waters of a new dam on the Indus will also flood large sections of the old Karakoram Highway, which when it was built in the 1970s, claimed a life for each of its 883km.

“Land Rovers have taken us from the southern tip of the African continent to the Roof of the World,” concludes Kingsley. “What a great feeling! It’s been a special privilege to travel this iconic road which will one day be only a
memory.”

The Cape Town to Kathmandu expedition will now travel south across the Punjab to Lahore in time for the daily military ceremony at Wagah, which marks the sensitive border with India. Then it’s on to New Delhi, the famed Taj Mahal at Agra and onwards again to meet the Ganges at Varanasi en route to the final destination of Kathmandu in the Himalayan Kingdom of Nepal.

Under the shadow of the great Mount Everest, the team will ceremoniously empty a symbolic, decorated Zulu calabash of south Atlantic seawater carried all the way Cape Town and will present the expedition’s Madiba Scroll of Peace and Goodwill to representatives of Kathmandu as a symbolic gesture of friendship from the people of South Africa. Hundreds of well-wishers have already added kind-hearted messages to the Scroll along the route, which has successfully crossed southern Africa, Turkey, Georgia, Armenia, Iran, Pakistan and India.

CAPTION: Nepal here we come: One of the Land Rover Discoverys on the way to the Karakoram Highway. Picture: Motorpress