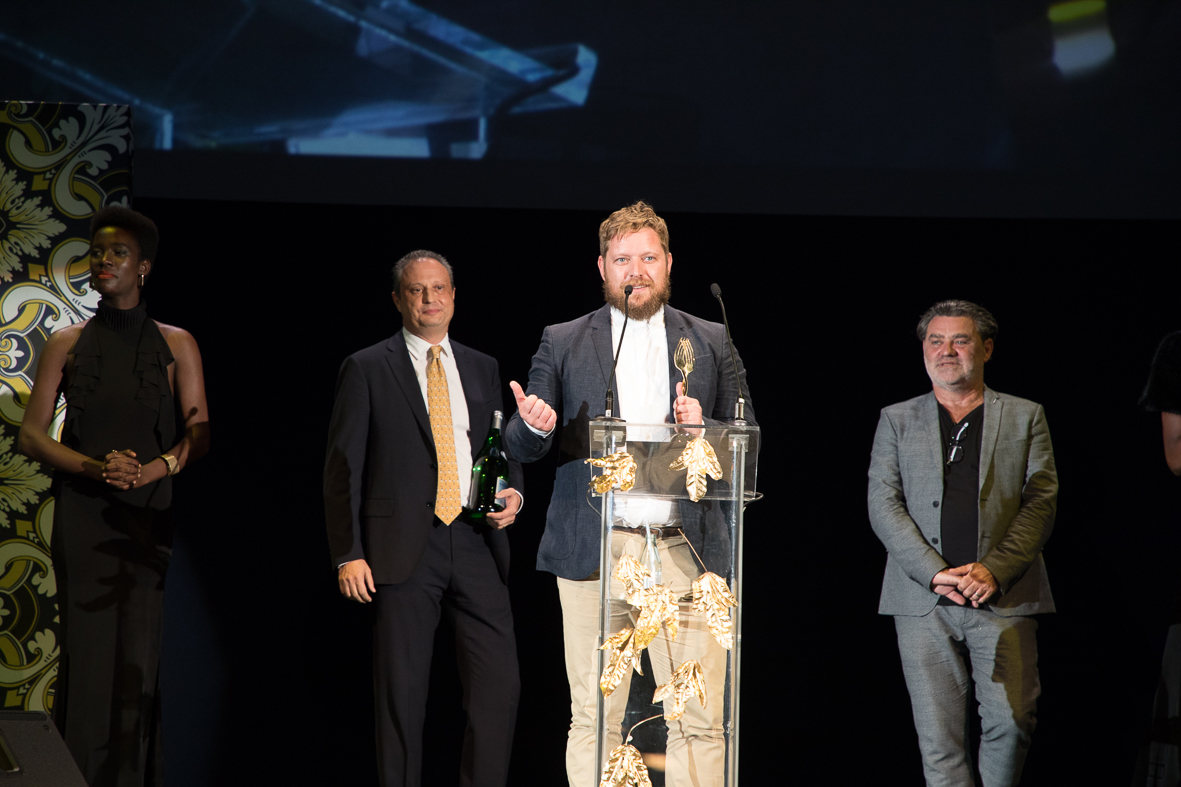 One of the most coveted accolades is the S.Pellegrino and Acqua Panna Chef of the Year award, which recognises an innovative chef who is pushing the boundaries and making a notable contribution to the South African restaurant scene. The award is sponsored by S.Pellegrino and Acqua Panna as part of their commitment to the global fine dining industry, which includes the worldwide S.Pellegrino Young Chef awards and sponsorship of the illustrious World’s 50 Best Restaurants list.

The 2018 S.Pellegrino and Acqua Panna Chef of the Year, announced at the Eat Out award ceremony on 18th November, is Chef Kobus van der Merwe of Wolfgat restaurant in Paternoster, a small fishing village two hours’ drive from Cape Town. At Wolfgat provenance, simplicity and integrity take pride of place, most ingredients being sourced within a 10km radius of the 20-seater fisherman’s cottage restaurant.

“The menus at Wolfgat usually come about very intuitively,” says Kobus. “We are inspired by the West Coast landscape with its dramatic seasonal transformation, and unique Strandveld Fynbos plant kingdom. Dishes are adapted according to the weather and the season, led by what we find on our daily exploration of the coastline.

“The Wolfgat kitchen is deliberately unindustrial. We like to cook simple dishes that showcase the unique ingredients. Because we serve things that people often haven’t tasted before, such as indigenous succulents and herbs, those elements in the dishes are mostly served raw, or with minimal manipulation.”

Kobus grew up in a family of food enthusiasts, with an appreciation of quality ingredients, and good, simple cooking from both his mother and father’s sides of the family. His interest in food led to further research and a deepening knowledge of local and traditional ingredients. “I am a big fan of C. Louis Leipoldt, the Afrikaans writer, poet, botanist and cook – especially his 1930’s cookbook, Kos vir die Kenner (Food for the connoisseur). There is a rich history of early civilisation on this coastline, which we find very inspiring.”

Before he opened Wolfgat two years ago, Kobus made a name for himself at nearby Oep ve Koep, originally his parents’ country store, bakery and garden restaurant, which he transformed with local heritage food, and by introducing the concept of foraging long before it became an international trend and buzzword. “The reason we pick the plants that we do, is our way of sharing our unique location with guests,” he says. “In picking and cooking with the succulents and seaweeds and wild herbs that naturally occur on this coastline, we attempt to capture the ‘genius loci’ or spirit of place of the West Coast, and to share that with visitors from around the world. It’s also about diversification of diet, and a rediscovery of ingredients our generation has forgotten about. Even if the buzzword is killed, and the trend blows over, we’ll still be cooking with dune spinach, soutslaai and klipkombers.”

Winning the S.Pellegrino and Acqua Panna Chef of the Year award was a complete surprise. “It is an incredible honour, and something I thought only happens to a chef much later in their career… it certainly came very unexpectedly,” he says. “The recognition means a lot, especially coming from a group of industry experts led by the inimitable Margot Janse.” And having long been a fan of the World’s 50 Best list, of which S.Pellegrino is the main sponsor, and subscribing to their Fine Dining Lovers social media posts, Kobus deeply appreciates the accolade from a brand known globally for their commitment to fine-dining. With the award he receives a trip to the annual Care’s event in Italy, a ground-breaking conference that brings chefs from around the world together to discuss, debate and workshop vital issues around sustainability and ethics in gastronomy and identify the best way forward for global fine dining.

Meanwhile Kobus is excited about the endless possibilities of composition that come with a new season and its ingredients. “For our new summer menu we have decided to revisit some recipes from our cookbook, Strandveld food, which was written five years ago. We are reinterpreting those ingredients and flavour combinations with a fresh take, and in a new context.”