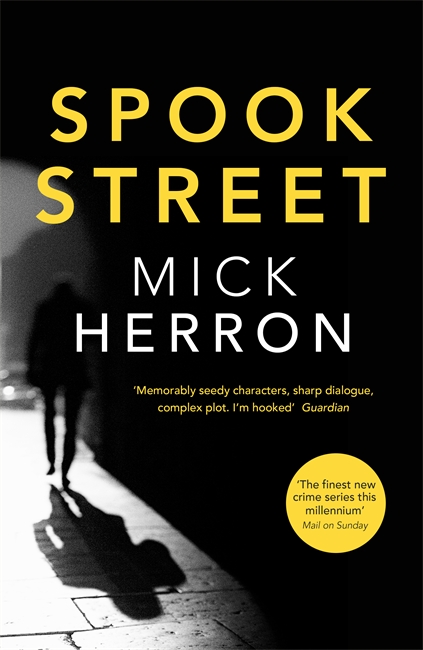 Spook Street was written before London Rules (The Gremlin, October 3) and also features the slow horses of Slough House, a run-down office block not far from the Barbican. The building suits the slow horses, the men and women who have blotted their copybooks and have been exiled as rejects by Britain’s Secret Service with no hope of redeeming themselves. Despite their sins or because of them their activities bear fruit.

Head of this bunch of misfits, although it’s unkind to call them that, is Jackson Lamb, a bear of a man, as uncouth as he is large, and as odious, with manners to match and the absolute antithesis of John le Carre’s Smiley.

Spook Street opens with a bang when a bomb explodes at Westacres shopping centre killing a flash mob of dozens of teenagers while they were dancing and singing, “Living for the sunshine”, a typically wry observation from Herron.

David Cartwright, a Cold War spymaster and grandfather of River Cartwright, one of the slow horses, is earmarked for assassination. River wants to know why his grandfather, whom he affectionately calls Old Bastard (OB), is the target.

River who is concerned about the OB who is suffering from dementia goes to visit him and there he finds a dead man. He raises the alarm and it’s Lamb who has to identify the body. But the OB is not there and River has gone AWOL to France, armed only with a passport in the name of Adam Lockhead, his wallet, a café receipt and a Eurostar ticket.  River whose French is of the schoolboy variety, ends up in Angevin and the café, then to Les Arbres, once a mansion but now a burnt out shell. Meanwhile back at Slough House the text that Lamb sent identifying River as the dead man upsets the slow horses.

Lady Diana Taverner, who was glossed over for the First Desk post, now occupied by Claude Whelan, from across the river, are trying to track the bomber responsible for the Westacres devastation and Whelan is shocked when Taverner tells him it’s “one of us”.

Lamb and by extension, River, uncover a scheme to breed the “ultimate sleeper”. And somehow the legendary OB is involved.

The characters that featured in Slow Horses, Dead Lions, Real Tigers and London Rules are back: Catherine Standish, the recovering addict; JK Coe, a psych evaluator who has psychological problems of his own; Rodney Ho, the IT wizard; Shirley Dander; Marcus Longridge, a gambling addict; Louisa Guy who has anger management problems, and a new addition, Moira Tregorian who has come to sort out the paperwork that has been piling up for months in the slum that is Slough House, and looming large over all of them is the loutish Lamb, whose outrageous behaviour belies his sharp spook’s brain.

The politically incorrect Lamb is famous for his one-liners which he tries out on the delectable Emma Flyte, the new Head Dog, a former Metropolitan police officer who has been recruited to the Service and is in charge of their internal security. “Did he have any identifying marks, tattoos? piercings, scars?” she asks Lamb about the body. “How should I know I make them wear clothes around the office.”

The characters feel all too real because they are so flawed.

Spook Street is the fourth novel featuring the Service’s rejects and is an absorbing read. The dialogue just crackles along and there is evidence galore of Herron’s dry humour. Herron is better than John le Carre, Len Deighton and Graham Greene, all masters of the genre.