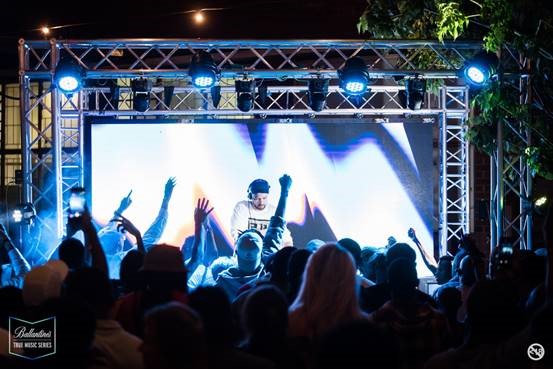 Ballantine’s True Music Series next heads to the friendly city of Port Elizabeth on Friday, 21 December 2018 at the Black Box Theatre, for the second part of a four-city tour that kicked off in Pretoria.

True Music Series is a global collaboration between Ballantine’s and famed Argentinian-Spanish visual and kinetic street artist Felipe Pantone, combining his contrasting kinetic artwork with the live music of some of SA’s most exciting DJ’s and producers.

“We’re glad to have brought True Music Series to South Africa, in collaboration with Felipe Pantone and Kid Fonque ’s brand, Kid Fonque Presents… The Pretoria event was phenomenal and well attended by fans of true music and we cannot wait to hit it off at the Black Box Theatre”, says Simone Smith, Brand Manager of Ballantine’s South Africa.

As a project, the Ballantine’s True Music Series gives uncompromising artists a unique platform to share and visualise music and different music scenes that inspire artists and fans worldwide.

Much like the Pretoria event, the Port Elizabeth show will feature Felipe Pantone’s specially created artwork, which fuses bold graphics, strong contrasts and vivid colours with mixed typography to create ultra-modern art. The art will come to life through the music of the artists on the line-up, which include local twins Jay Em, Kid Fonque and the legendary Vinny Da Vinci.
“After having a very successful first event in Pretoria last month, we’re excited to be bringing Ballantine’s True Music Series to the coast and promote local artists doing it their way. It promises to be an epic night of music and art combined” says DJ, radio host and producer, Kid Fonque.

The event takes place on Friday, 21 December from 7pm, tickets are available at Quicket for R100. For more information on the Ballantine’s True Music Series visit http://www.ballantines.com/truemusicseries.