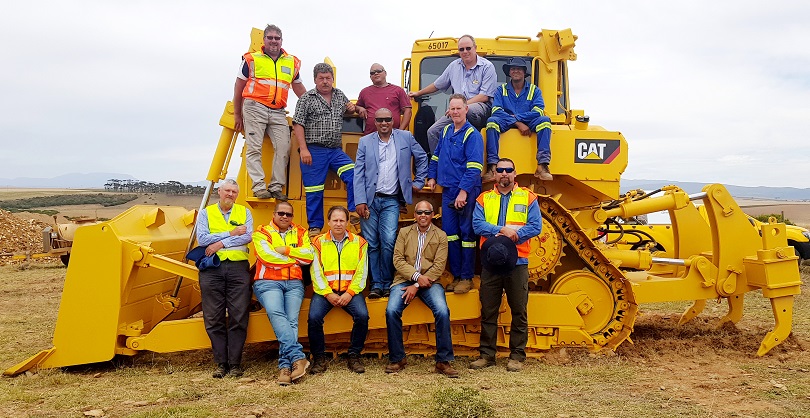 A new Caterpillar (CAT) D7R bulldozer was officially handed over to the Garden Route District Municipality (GRDM) Roads Department on Thursday, 6 December 2018, at the DR1524/18.5/0.5R borrow pit near Riversdale.

The new R5.7 million bulldozer is one of two machines that were delivered to GRDM by the Department of Transport this year and it is just what the Roads Department needed to intensity and more regularly maintain the roads of the Garden Route district.  Mr Japie Strydom admits that the process to motivate for the machine of this magnitude does not happen overnight.  “The process required months of thorough planning and motivation to the Department of Transport, to finally be in possession of a machine of this nature,” Strydom added. He further extended a word of appreciation, on behalf of the GRDM Management and Council, to Mr Handre Strydom and the Department of Transport for the years of continued support in ensuring that the GRDM Roads Department has the resources available to give the Garden Route roads the necessary attention it need.

Describing the mechanical features of the bulldozer, Mr Handre Strydom said: “This 28 ton machine is strong enough to handle a mass of up 30 tons”.  He further added that the machine has a lifespan of 20 years but can be in use for up to 30 years, if well maintained.  In answering a question posed by Mr Daniels, on whether the parts of the machine are locally available, Mr Strydom responded:  “All parts of the machine are available in the Republic of South Africa, therefore if parts need not be replaced, it will not cause a delay in the road maintenance operations”.

Mr Japie Strydom elaborated that the bulldozer will be utilised to stockpile useful road material from 38 borrow pits situated in the Garden Route, but will mostly be responsible for stockpiling of material from the DR1524/18.5/0.5R borrow pit near Riversdale.  Mr Strydom said: “Material hauled from a borrow pit is transported to a specific road section for further processing.  When the material is finally approved, the re-gravelling of the road can commence.   This process will repeat itself over a certain period of time e.g. 10 years, as small amounts of material get lost over the years, which results in the deterioration of the road. The material gets lost due to environmental factors, traffic counts and weather conditions, such as rain and wind” Mr Strydom added.

While facilitating the discussions of the handover ceremony, Mr Daniels, highlighted: “Now we can continue to deliver services to our road users by ensuring that the quality of our roads in the Garden Route is on standard” and he added: “I am confident that with this type of machine, we will definitely achieve our goals of effective service delivery and well maintained roads”.

Mr Japie Strydom concluded:  “With all these resources to our avail, we will be able to do a high level of preventative maintenance on the machine to ensure that we indeed reach the lifespan of more than 20 years and more”.  For this reason, Mr Jaco Gunter, the machine operator, underwent specialised training on 11 December 2018, which was conducted by a Barloworld Specialist Operator Trainer, Mr Elias Shabalala.

Within a few days’ time, this brand new machine will be housed at the GRDM Riversdale depot, while its operator and mechanical staff will enjoy the festive period with their family.

Caption: Representatives from Garden Route District Municipality, the Western Cape Department of Transport, CAT South Africa and Barloworld, during the official handover of the Caterpillar D7R bulldozer at the borrow pit near Riversdale.