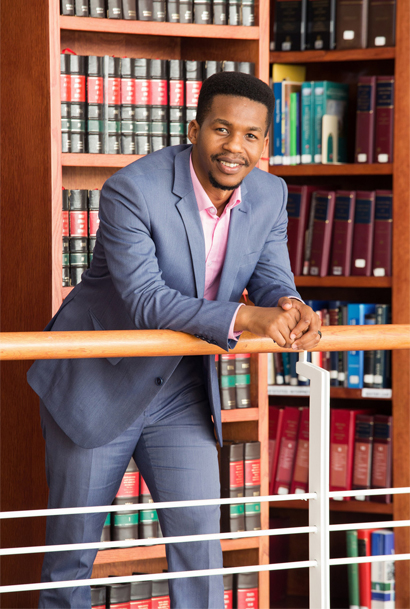 I smiled politely – not sure whether the earnest expression on the face before me was expecting a reply, or whether I should admit that I did not know what language he was speaking, much less what he meant. Approaching an interview with G&B’s newly appointed director, Chuma Vabaza, I certainly did not expect to have Latin thrown at me; neither did the surprises end there. On hearing in advance of the interview that he had been educated at Selborne College in the Eastern Cape, I might be forgiven for assuming that I was going to meet a young professional who had enjoyed a privileged upbringing and had escaped the typical South African issues that prevailed during the 80’s, but therein lay a further surprise.

Only child to a single mom, Chuma was born in the township of Duncan Village in East London in 1986. Wanting a better life for her only child, his mother courageously made the decision to move to King Williamstown where she started a clothing design business and sent Chuma to Shornville Primary School. Chuma speaks fondly of the school that he believes was responsible for instilling in him a love for English and History and also a love for sport – adding that he played rugby, cricket, soccer and participated in athletics and, when pressed further, admitting that he was head boy of the school in Grade 7. Described in the media in the last few months as a “death trap” because the original structures made from plywood and asbestos have never been upgraded or maintained, Chuma’s loyalty to the institution responsible for his primary education is touching. Describing his daily life as a youngster attending Shornville, Chuma explained how from the age of 5 or 6 years old in Grade 1 he would catch a taxi to school on his own, wearing the brown and yellow uniform that the school is still known for today. “I don’t remember being scared” was Chuma’s answer to me, “the adults in the taxi would take care of youngsters like me and the strong sense of community that existed ensured that nothing bad ever happened.”

But it is Chuma’s description of his arrival at high school that touched me the most. He remembers that out the blue his mother announced that he needed to attend Selborne College in East London. Chuma sheepishly admitted that his reaction to this was astonishment because he had never even heard of the school and yet, unlike many 13 year olds, he never questioned his forward–thinking mother for a second. Not deterred by the fact that no one else he knew would be attending Selborne, or that the teachers and fellow pupils at Shornville laughed when he told them he was applying to Selborne College, he nonetheless made the journey with his mother to East London.

He describes being overwhelmed when he saw Selborne for the first time, and the fact that astonished him most at that tender age was how green the grass was! “I picked a few blades of this green, lush grass in my fingers and I thought to myself ‘do I even have a chance here?’” His acceptance at Selborne was something that was not initially believed back at Shornville, and he had to take his acceptance letter to school to be taken seriously. As a young 13 year old he left home and travelled to East London to commence his high school education as a boarder at Selborne and Chuma remembers feeling excited by the prospect of meeting new friends – to such a degree that he could not sleep on the eve of his first day. He says: “I was in a dormitory of 5 boys from a mixed racial and economic background, and I could not wait for morning!”

For Chuma, high school was about the fun of pillow fights in the dorm after “lights out”, it was about cricket and rugby, it was about teamwork and lasting friendships, and it was about nurturing his Christian faith. Academically he excelled, electing to study Latin in Grade 8 and 9, before the department of education ceased to recognize it as a subject. Chuma singles out Mr Miller, his Under 14 C rugby coach, who had such belief in his team that they too believed they could be better than they were, many of them moving to the A team simply because of Miller’s encouragement and inspiration.

Self- belief was first instilled in Chuma by his courageous mother whose financial sacrifices and vision for her son provided Chuma with the education he received and resulted in him excelling at his tertiary studies too and graduating with a law degree from the University of UKZN, Pietermaritzburg. “Being a lawyer is pretty much the only professional career I’ve ever considered,” says Chuma, “probably influenced by the fact that there were a few lawyers in my extended family.” This is a bit of an understatement from the up-and-coming young lawyer when you consider that his great-grandfather was Gamaliel Vabaza – a man who was educated alongside Nelson Mandela at the missionary colleges of Clarkebury and Fort Hare (incubators to some of the greatest African scholars the continent has ever known) and who was one of the first black lawyers to ever be admitted to the Cape Law Society.

After attaining his LLB in 2008 and serving articles with a Pietermaritzburg-based law firm, Chuma practised as an attorney in Pietermaritzburg until 2016, when he was appointed as a senior legal advisor at the KwaZulu-Natal branch of the Motor Industry Bargaining Council where he was responsible for coordinating and managing the enforcement of the industry’s collective agreement. But he missed the challenges of legal practice and joined Garlicke & Bousfield as a Senior Associate in the Employment Law Department in 2017.

Asked how he rose to the ranks of director so quickly, he humbly shrugs and says, “I have been fortunate in my life. Ex nihilo nihil fit – that’s what I live by”. Turns out that literally means “nothing comes from nothing” – in Chuma’s case he says he was brought up to believe from a young age that it is what we make out of whatever we have been given, not what we have been given, that distinguishes us from each other.

A typical role model for young South Africans himself, Chuma says that the people he most admires are Nelson Mandela and Michael Jackson. “Mr Mandela was the ultimate statesman – it would have been great to have a conversation with him. As for Michael Jackson, well he was simply the greatest entertainer of all time!” But clearly there are also two inspiring women in Chuma’s life, his mother and his German wife, Frauke, who he met while she was doing a gap year at his Church. When it was time to propose, Chuma travelled to Nordhorn, a small town in North West Germany, where he met, for the first time, his future in-laws. When asked whether he was nervous, Chuma replied “why would I be? I was excited!”

The couple married in Germany in a beautiful old stone church with stained glass windows, Chuma’s mother having left South Africa for the first time in her life to witness her precious son’s marriage. “I was worried my mum would get lost in Dubai” Chuma laughs, “but she made it, as did two of my Selborne College friends.” They celebrated their wedding with a honeymoon in Paris and returned to South Africa thereafter. In his free time which is limited, Chuma enjoys playing golf and spending time with Frauke and their beautiful sons – two-year-old Kairo and seven-month old Rocco. “A legal career can be all-consuming and finding balance is extremely important,” he says.

Looking forward, he says, “I am so proud to be part of the G&B history, which now spans more than 150 years, and I look forward to being part of its future. There is something very unique about joining a firm with such a distinguished history and I hope to make my mark amongst those who have journeyed before me.”

As I put down my coffee cup, and the interview draws to a close, I am left with the inescapable conclusion that Chuma’s hero, the late Nelson Mandela when he said “a winner is a dreamer who never gives up” could well have been describing the young attorney who bid me goodbye with an infectious smile and a nod of his head.