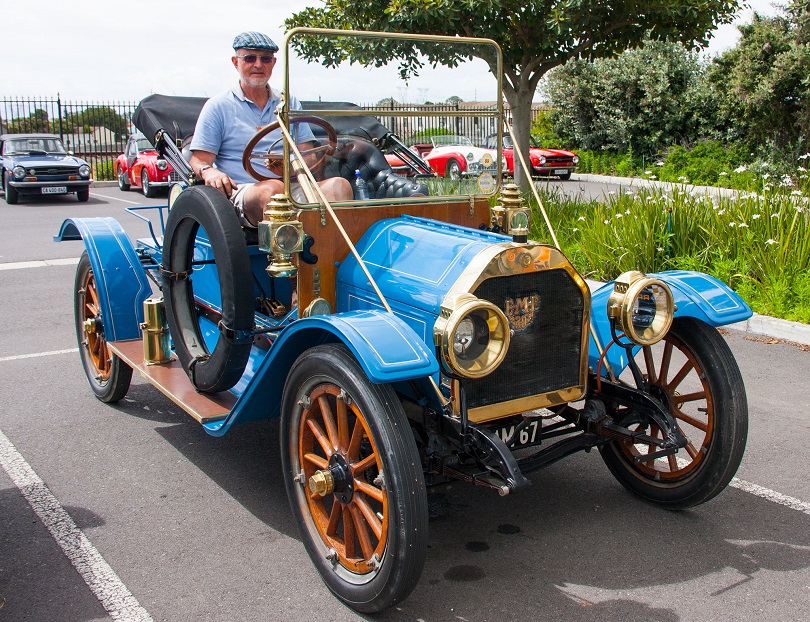 George – The 23rd George Old Car Show, driven by Oakhurst Insurance Company and which will take place on 9 – 10 February 2019, will focus on rare and exotic cars.

Robert Middelmann of Botriver owns an Everitt, Metzger and Flanders, or EMF, which was manufactured in Detroit, USA in 1912. This rare gem will be exhibited at the 2019 George Old Car Show.

The EMF Company was an early American automobile manufacturer that produced cars from 1909 to 1912. Barney Everitt was a custom auto-body builder from Detroit, William Metzger was formerly with Cadillac, and Walter Flanders had served as Henry Ford’s production manager. The three men joined forces to manufacture the EMF during the company’s short existence.

“Our car was found in Cape Town by the late Angus Kinnes, who was one of the founder members of the Crankhandle Club in Cape Town,” said Richard Middelmann. “My dad bought the car from Angus’s wife when he passed away. That was around 1972, I think. The car participated in a rally – the last rally until 2003. The engine was totally worn out and the car was transported to our Honingklip Fruit farm on our old Ford truck.”

According to Richard, the EMF’s engine was repaired before being stuck away in a corner. The body was taken off the chassis, disassembled and also stored. The chassis was hoisted into the workshop rafters.

“Around 1998, I told my dad that we need to put the EMF together to have a running veteran car. We decided that the turn of the century was a good deadline to have a running engine, even if only on a chassis. On the afternoon of 31 December 1999 we successfully started the EMF engine in the workshop!”

And so a five-year journey started to completely rebuild the car. “The year 2003 saw the centenary of the Houwhoek Run, so we had another deadline to work towards.”

They managed to complete a new wooden body for the car as the old one had completely rotted away. “Many hours and a lot of hard work went into completing the car on time for the Houwhoek Run, but we managed it on time!”

Since 2003, the car has participated in numerous rallies and shows. “My parents completed the Milligan Rally a few years back. The car was driven to the start of the Milligan in Oudtshoorn, participated in the rally, and was driven back to the farm without any mishap – a journey of around 1 600 km!  I have exhibited the car at the George Old Car Show many times and have participated in several of the Veteran’s Tours.”

Only vehicles manufactured before 1975 and which have been registered in advance, may be exhibited at the show. Registration has already opened and can be done on the website www.scocc.co.za Contact Klaus Oellrich at 076 764 0897 for more information on registration or any other general information on the show.