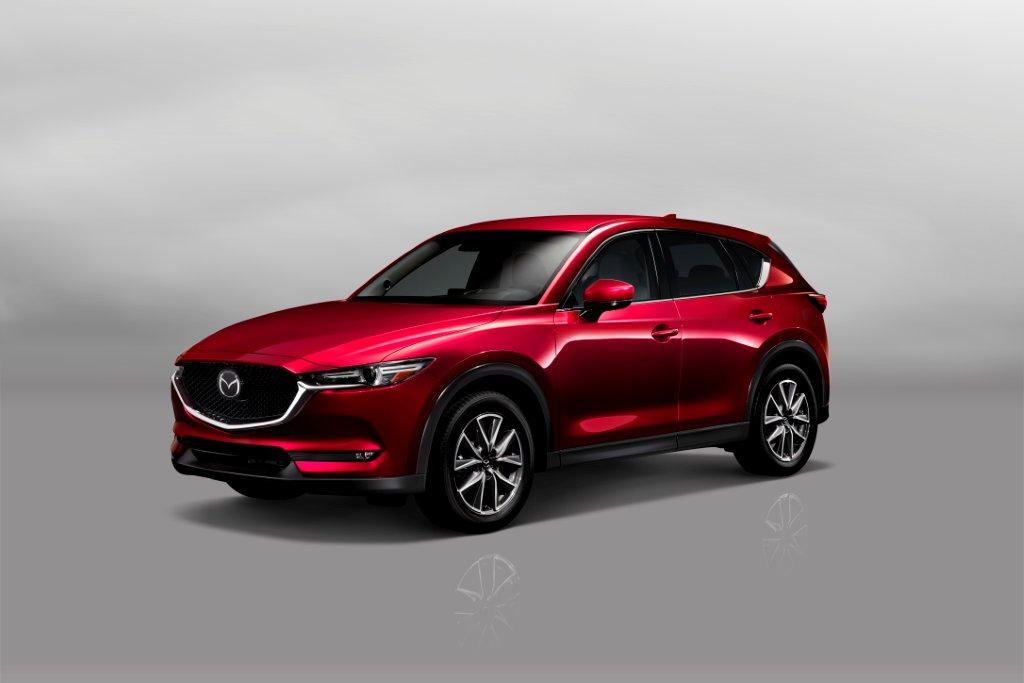 Brian Joss – Mazda gave me its latest version of the CX-5, the Individual 2 litre Front Wheel Drive Automatic for a few weeks and apart from day outings to various touristy spots on the Cape Peninsula, and to shopping malls,  I drove it to Johannesburg and  the 1 400km journey which included an overnight stop at the Protea-Marriott in Bloemfontein went without a hitch.

The Individual was so comfortable it was hard to believe that I had been behind the wheel for 12 hours for the first half of the trek.

Usually after a long journey my limbs are so stiff that only a hot shower will help which was the first thing we did at the hotel after the back staff sorted out the booking snafu which could have proved embarrassing if other guests had been waiting to check in.

In  my view, Mazda vehicles in South Africa have always been  under-rated.

Maybe because of the snob factor. But after the divorce from Ford a few years ago and some excellent marketing the brand has come into its own. The Mazda 2.2l DE Akera AWS Auto is an example (The Gremlin, August 15, 2017), as is the Mazda2 1.5 diesel which I took on a 3 000km road trip from Cape Town to Johannesburg and back via Route 62, stopping off at Prince Albert overnight and to explore the little village and its surrounds,  once more.

The Mazda2 was a fuel miser and the journey was a pleasant distraction from the hum-drum routine of daily living (The Gremlin, February 29, 2016).

The CX-5 Individual, which features a turbocharged diesel engine, is an addition to the range. It  has many features which add to the driving experience and include eight-way power adjustable seats for the driver and passenger as well as 10 Bose speakers to give you music to drive by. There are parking sensors, front and rear, a Heads Up Display (HUD) which reflects on the windscreen and SatNav which works, although we got a bit bamboozled (and lost) on the M5. Instead of arriving in Johannesburg we  found ourselves in Florida: through no fault of our own but because we didn’t listen to the SatNav, and the signage on the motorway was very confusing. So our hosts had to come from the suburbs to rescue us. Safety features on the individual , include Lane Departure Warning System (LDWS), Smart City Brake Support (SCBS), Lane Keep Assist (LKA), Lane Departure Warning (LDW), Driver Attention Alert (DAA), Adaptive LED headlamps and Blind Spot Monitoring (BSM), and they all operate efficiently. There’s also a rearview camera and the Individual is keyless starting and it has an electronic brake.  The CX-5 Individual also has a Powerlift tailgate, and speaking of the boot, it has a capacity of 506 litres expanding to 1 620 litres with the usual 60-40 seat split. It was more than enough for our luggage and cardboard boxes we were taking to Johannesburg without having to increase the load space. The split is easy to do with a pull of the lever.

As shown on some of our day trips three can sit more than comfortably at the rear, and from the front, the driver has a good view of the road.

The CX-5 also sports Mazda’s much vaunted SkyActiv technology and G-Vectoring control which changes the engine torque. The G-Vectoring made its first appearance in the Mazda3 and it has a definite effect on the handling of the CX-5. It feels lighter and at speed it needs fewer inputs to keep it on the straight and narrow, and it does help to take corners “like a racing driver”, which, says Mazda, is the aim.  The diesel develops 129kW and 420 Nm of torque and it’s definitely not short of oomph to overtake safely. It also cruises along quite happily at speeds of between 120km/h and 140km/h. The six-speed automatic works smoothly with no noticeable hunting.

On the route to Johannesburg law enforcement was conspicuous by its absence, except for a road block outside Hanover where traffic police checked driving licences. On the way back there was a speed trap, also near Hanover, under a bridge, where the cops were skulking. And in Beaufort West, at the entrance or exit to the town, depending on which way you’re going, where the provincial traffic squad usually congregates, they were nowhere to be seen, this on December 11 and on December 17, on the return journey.

But  back to the CX5: the cabin is a lot more refined with some quality materials including aluminium flashes around the switches. The engineers have done a lot to reduce cabin and road noise. So you don’t have to shout to make your voice heard. The information on the infoscreen is much clearer and easier to read.

We made reservations at the Protea-Marriott on Nelson Mandela Boulevard about two weeks previously and it was confirmed. When we went to check in there was a problem with the booking even though the hotel group gave me a voucher with a pin for the overnight stay. The desk clerk said the voucher still required a signature from head office. I paid with my credit card and was given the key to our room. No sooner had we put down our overnight case the front desk called to say that the back staff had sorted it out, and I must come back so they can reverse the debit on my credit card. Which they did.

The room was as comfortable as any other Protea hotel; I’ve stayed in several and years ago I was invited to the opening of the Protea Wilderness and we stayed there overnight when we moved to Cape Town. After a long journey if  all you want is a hot shower, a meal and a comfortable bed, then the Protea-Marriot ticks the boxes. Not so much the restaurant though, where the meal which included a fillet and accompaniments and a lamb shank, was nothing to write home about. The lamb shank was tough and my wife declined the chef’s offer to cook it for longer (read microwave),  and most of it went back untouched. The two bright spots of the meal were the carafe of wine and the double Dom Pedro (with Kahlua). T  the staff at the hotel and eatery were most obliging and despite the hiccups I would still stay at a Protea-Marriott, as sometimes things are sent to test us, and this was one of them.

Security at the hotel was vigilant and the Mazda CX-5 individual, with all its luggage, was as we left it in the parking lot.  Next day we set off for Johannesburg and apart from the “detour” to Florida, the CX-5 behaved impeccably.

We left at 7am and got there at about 11am. It was an uneventful journey.

The second half of the journey was just as pleasant.  However, the pit-stops along the way were packed out up until the Grasmere toll plaza as the various biker groups had decided that Sunday was the perfect day for their weekly outride.

Diesel fuel for the journey cost R1 515.76 and the tolls, excluding the etolls added an extra R175. Mazda claims 5.8 litres/100km. My figures were just over the 6litre/100km mark which is excellent for real time driving conditions. I was a back seat passenger on the return journey in another marque and it was also an uneventful 16 hour journey apart from some crazy drivers who had no respect for the rules of the road. Double lines and blind rises didn’t mean anything which is why the fatality rate on the roads at this time of the year, misnamed the festive season, reads like a cricket scoreboard.  There were quite a few Mazda3s CX-5s and CX-3s on the road and the Mazda logo, which has an interesting history, was clearly visible. Over the years the logo has had several major design changes to find one that would best represent the brand on the global market. The current Mazda emblem is a silver colour and features a stylized M, looking like a pair of outstretched wings. One website said the name Mazda originates from Ahura Mazda, the ancient Persian god of light, also the god of wisdom, intelligence and harmony. The god is also a symbol for the origins of Eastern and Western Culture. The name also comes from the company’s founder,

If I had to undertake another long distance trip, the Mazda CX-5 Individual would be in my top three. It’s comfortable; practical, economical, great to drive and with all the nice to haves that you don’t find in too many crossover SUVs in this market sector. You could quite happily use it for your daily  commute as well.  It carries a price tag of R480 000 , check with your dealer, and it comes with a 3-year unlimited kilometre service plan, a 3-year factory warranty, a 3-year roadside assistance and a 5-year corrosion warranty.