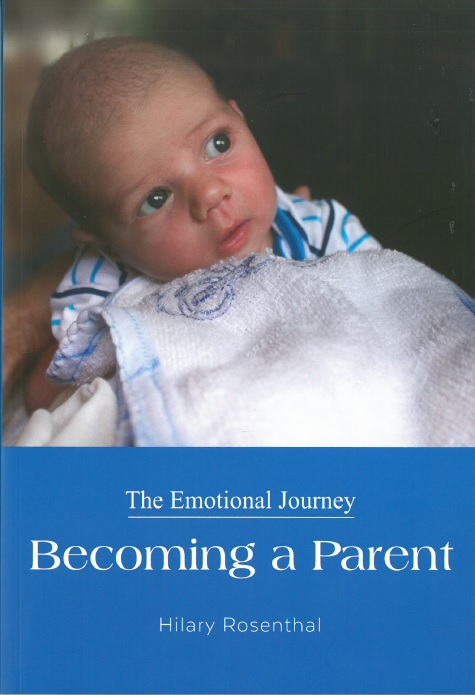 The aim of Becoming A Parent is to help mothers and fathers negotiate the hurdles of parenting and to become aware of the challenges and responsibilities (and joy) of having a new-born in the house. It is also timely in that it has been published as the debate rages around whether you are allowed to smack your child (in South Africa it is illegal). Rosenthal also provides case studies that show how abuse during childhood can affect you as an adult.

The book is not only for mothers. Dad also has a big role to play, as Rosenthal points out. Some men, Rosenthal writes, when they hear that a baby is on the way, have a feeling of awe and wonder. Other fathers are anxious and concerned about the responsibilities they will  face with all the changes the baby brings. One couple came to see her as the mother was frustrated because the father was unwilling to give her the help she needed with the baby. During the counselling session it emerged that the baby’s crying disturbed him. He recalled that when he was quite small he was being cared for by his grandmother. If she was displeased with him she used to lock him in a cupboard and leave him there for hours on end, despite his pleading and crying. Once the source of the problem had been identified, his wife was very sympathetic and they found other ways in which he could help.

It’s not only mothers who experience depression after a birth. One study (Paulsen and Sharnall) showed that the percentage of South African men suffering from pre and post-natal depression was as much as 10%. Twice the incidence of depression among men in the general population of America.  Research has shown that babies benefit from the father’s input from birth and they are likely to be more settled and peaceful in the early months if they have a good relationship with their fathers. The father’s voice can have a calming effect and the baby will benefit from being held against his chest because he is not as stressed as the mother is.

The book is divided into 10 chapters: Preparing to become a mother; Motherhood – the beginning of the journey; Becoming a father; Responding to your baby; Staying close and connected after the birth of your baby; Some useful information on feeding, sleeping and crying; Our own experience of childhood; Motherhood brings unfamiliar moods and emotions; Personal stories of mothers and Creating a family.

If you have ever dealt with a baby that doesn’t seem to stop crying, is wide awake or won’t feed, then the chapter on feeding, sleeping and crying will help you to tackle these problems in a sensible and beneficial way, for the parents, and the infant. Rosenthal suggests adopting the Five S method pioneered by American paediatrician, Dr Harvey Karp: swaddling, side, shushing, swaying and sucking. The method is supposed to mimic the womb environment but if it doesn’t work your child may be sick and should be seen by a doctor.

Postnatal depression and postnatal stress can be lessened or prevented to some extent, according to Rosenthal. Basically the new mother needs support during and after pregnancy and the South African Depression and Anxiety Group (SADAG) can help. They have a telephone counselling service seven days a week from 8am to 8pm.

Some of the personal stories from mothers will resonate with many women. The mothers and mothers-to-be talk about different issues: how an unplanned pregnancy affected one woman’s studies and how she and her partner worked out some of the practicalities to resolve the problems; another woman was worried about how a previous abortion would affect her feelings about the new infant. After she was referred to a psychiatrist she began to look forward to the birth of her daughter. She and her husband also decided to plant a tree in memory of her pre-term baby.

Finally, Rosenthal writes, having a baby is a privilege and a big responsibility, full of blessings, hard work and challenges, “but as a parent you will have more impact on your baby’s life than on any other person.

Becoming A Parent is a font of valuable information. It is written in an easy style without scientific jargon. It will help ease your journey to parenthood. There is a list of books for further reading and resources and help for new parents. Colour images help liven up the pages. There is also a quiz, the Edinburgh PostNatal Depression Scale (EPDS) which helps you to determine how happy you are.

Rosenthal holds Arts and Social Science Degrees from UCT and post graduate qualifications from Unisa in psychology and marriage guidance. She was instrumental in setting up the Parent Centre, an NGO based in Cape Town. Her special interests are pregnancy and early parenthood.