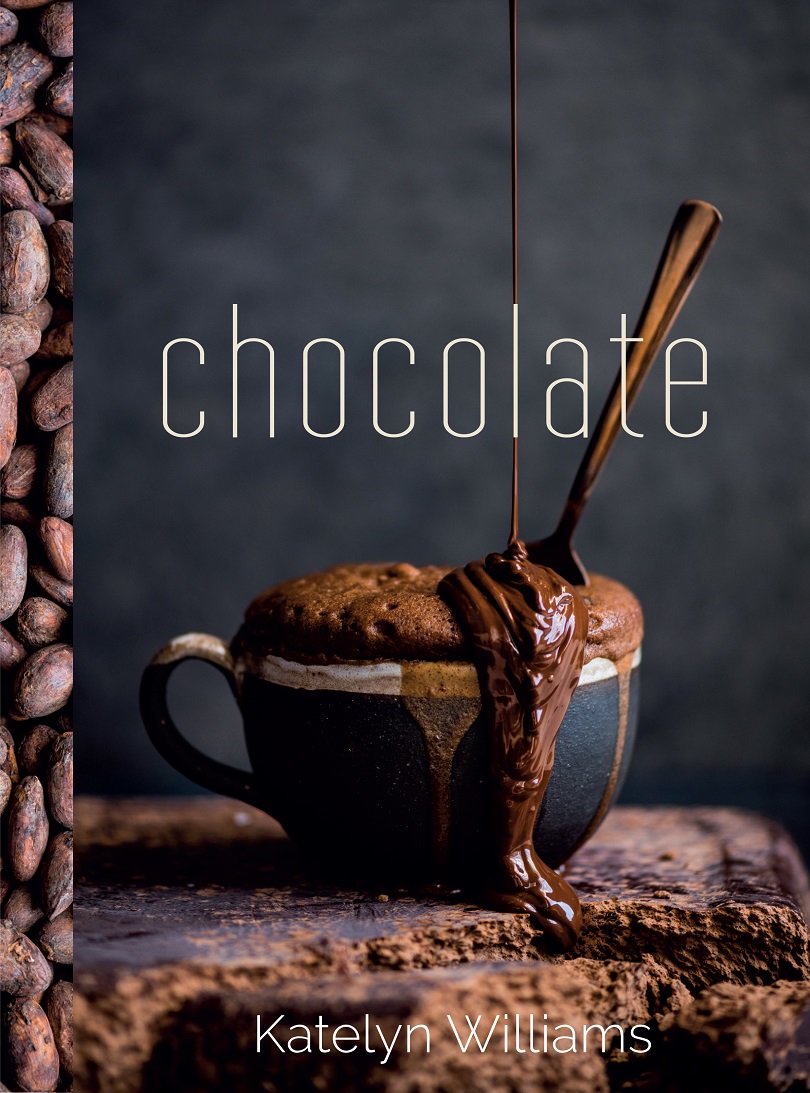 Chocolate is the panacea for all the world’s ills. And Katelyn Williams seems to think so too judging by the magic she makes with chocolate, from Microwave Chocolate Crunch Bars (when you don’t really need chocolate, which defeats the object) to a Triple Chocolate Mozart Cake and a Dom Pedro Baked Alaska, a milkshake for adults, and more complicated Chocolate Hazelnut Macarons.

There’s a cake and a cupcake for every occasion and a Never-fail Chocolate Birthday Cupcake.

Williams discusses the various kinds of chocolate and what you need to know and the difference between Couverture Chocolate and Baking Chocolate; how to melt chocolate in the microwave or on the stove. And if you don’t have any slabs in the pantry , don’t despair, you can use cocoa powder. There is useful information about cake tins; baking times; measuring and weighing; altitude which affects everything from rising to baking times and how to find the hot spot in your oven. The step-by-step recipes are graded according to difficulty. From dangerously easy; easy a little effort to a little (more) effort but worth it.

The book has nine chapters: Why Chocolate?; Speedy; Fruity; Crunchy; Creamy; Fancy; Naughty; Nostalgic; Bits and Bobs which features recipes for buttercreams; glazes; ganache and chocolate decorations. There is a comprehensive index.

You will find recipes for a Chocolate Affogato; Inside Out Carrot Cake; Doughnuts with Caramelised White Chocolate; Marshmallow Chocolate Log Eclairs; Dark Chocolate Peppermint Crisp Cake and Honeycomb and Macadamia Nut With Chocolate Sauce; and if you’re feeling nostalgic then try the Spiced Chocolate Soetkoekies with Boiled Condensed Milk. All the creations are guaranteed to make your taste buds sing.

Williams also gives a short history of chocolate and the western world has Herman Cortez to thank. The Spanish explorer failed to find Aztec gold in Nicaragua in 1502, but he took  cocoa beans, and the bitter chocolate drink that the Mayans developed, back to Spain as a consolation prize. Williams writes a prize-winning blog, TheKateTin.com. After studying at the Institute of Culinary Arts in Stellenbosch she worked at various restaurants and then as food editor on Top Billing and on SABC3’s Espresso where she became known for her insatiable sweet tooth and her recipes. She lives with her chocolate-maker husband, Nino, in Cape Town, a match made in heaven, so to speak.