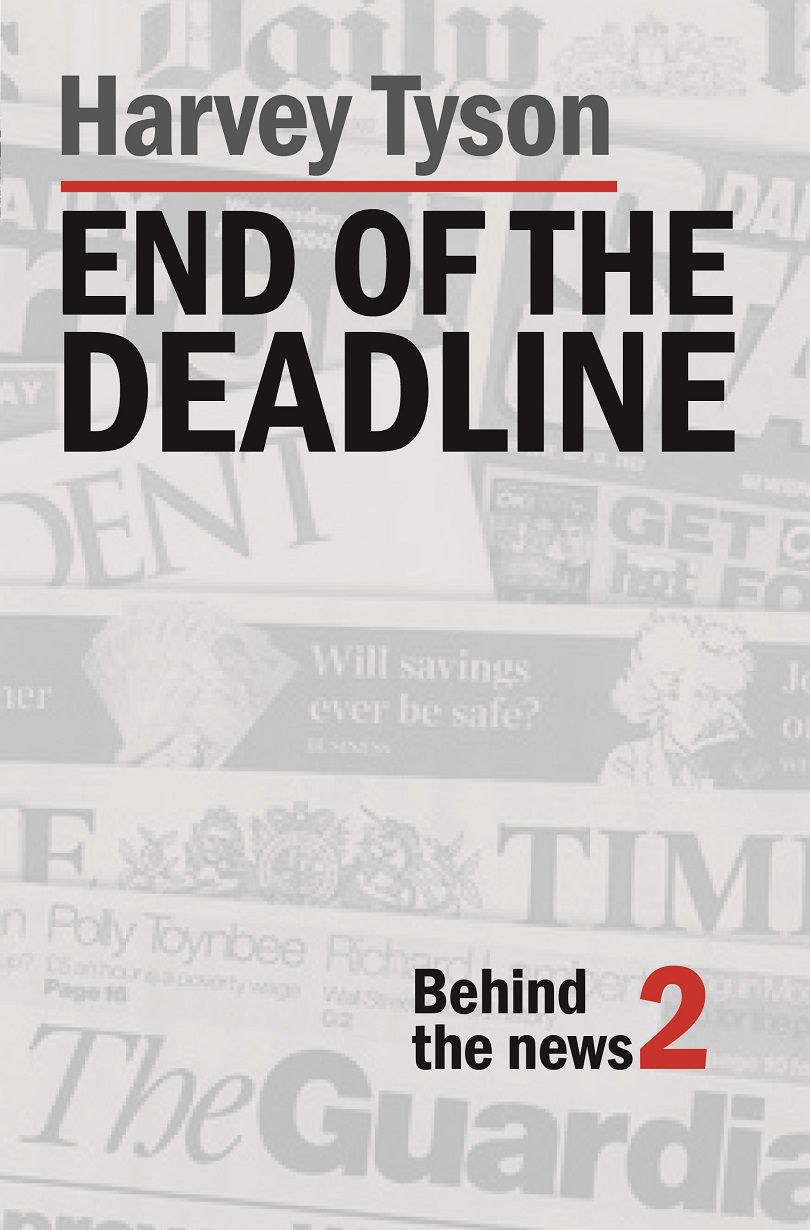 Harvey Tyson died a few days before End Of The Deadline: Behind The News 2 arrived and I believe the esteemed editor would have found it quite ironic and had a quiet chuckle. Behind The News 2 is as informative and as interesting as the first book, The Other Side: Behind The News 1 (The Gremlin, October 4, 2018).  In Part 1 Tyson takes the reader on a journey documenting the rise and fall and rise of journalism in South Africa through landmark events he witnessed and wrote about from when he was a junior reporter and his 16-year stint as editor-in-chief of the Star newspaper, then the flagship title of the Argus Group, which was later bought by Irish media mogul, Tony O’ Reilly, who in effect stripped the group of its assets and reporting staff. Although he did keep one promise and that was to resurrect the Sunday Star and turn it into the Independent. The Group was then bought by Iqbal Surve who changed the name of the company to Independent Media and started a process of transformation.  The multi-billion rand required for the takeover came from various sources including China, the Public Investment Corporation (PIC) which is now the subject of a probe, the UIF and the Government Employees Pension Fund, and all loans were interest-free.

Tyson doesn’t have too many kind words to say about Surve and wonders why any organisation would invest in newspapers whose circulations were dropping and the printing industry was facing a crisis. On the surface the investors seemed disinterested resources, enough to guarantee editorial independence. But that was a naïve assumption as has been shown. O’ Reilly didn’t care about the journalists or newspapers and he was only interested in the money. So why would it bother him, as Tyson writes, that the new owner, Surve, didn’t know anything about newspapers or journalism. And Tyson uses the once venerable Cape Times, as an example. “The Cape Times publishes so much irrelevant material and manufactured ‘fake’ stories … and on the face of it is a recipe for disaster”. Tyson compares Surve to press barons Rupert Murdoch and Sir Robert Maxwell, who bought the Mirror Group of Newspapers, but not in a good way. Tyson discusses other scandals about the Independent Group which are already in the public domain.

However, I don’t believe that the average reader is interested in the tit-for-tat squabbles between the Tiso Blackstar Group, owner of the Sunday Times and Surve’s Independent (an oxymoron if there ever was one) Group. They just want quality newspapers that provide news and are not published to satisfy over-inflated egos.

Tyson poses several questions that readers should also be asking. Among them, what makes news and good reporting?; How do editorially independent papers operate and offer accountability?; Who are the great leaders of newspapers?; Who are the villains, the people who have devalued the role of the Fourth Estate?; and; why is the printed press, with its crucial role in democracy, dying without making adequate arrangements for the next generation?.

The answers will surprise you but Tyson concludes that whatever the future, it will always need tens of thousands of men and women to practise accurate and ethical journalism and to fight for editorial independence in whatever media exist.

Behind The News 2 examines the role of the press barons; looks at some of the great names in journalism in South Africa and around the world; what is a journalist; adding a touch of humour are a few anecdotes about misprints, deliberate or unintentional and Tyson recalls how the Star defeated the government censors on one memorable occasion; the process of writing leaders which is a mystery to most people; the price of true and constant independence; and more. Tyson refers to the murders of Robert and Cora-Jean Smith in November 1977. Until now the killers have not been brought to book. The apparent solution to these killings were published in the Sunday Delaware News and evidence pointed to the Cubans, Bureau of State Security (BOSS),  the CIA and other shadowy organisations. The mystery continues and looming over it is “Lang Hendrik Van den Berg, the boss of BOSS, who in his early years, along with John Vorster, supported the aims of the Nazi-inspired  Ossewabrandwag and both were interned at Koffiefontein.

The role of Percy Qoboza, the editor of the Weekend World which was closed by the apartheid government , is also highlighted as is the part Layton Slater, the head of the then Argus Group and chairman of South African Associated Newspapers (SAAN), owners of the now defunct Rand Daily Mail, in restoring editorial independence. In fact when the Weekend World was closed Slater agreed to carry on paying the staff, including benefits, until a resolution was found.

In the chapter, Profile of a Journalist, Tyson makes the point that good journalists don’t have to have a string of degrees, they must be enthusiastic and curious. The late Percy Baneshik is an example. Baneshik was the arts editor of the Rand Daily Mail and then later of the Star newspaper, a literary critic in print and on radio, and writes Tyson, he did not attend a day of high school but was one of the most erudite and eloquent journalists he had known.

Baneshik was crippled for life by polio and while he was confined to bed during his childhood he read hundreds of books. (I often used to see Baneshik on his crutches, shuffling past my father’s dry cleaning business on the way to the Rand Daily Mail offices around the corner). Other well-known journalists include Winston Churchill, who considering the “mistakes he made in peace-time politics he should have stuck with writing”; Sam Clemens better known as Mark Twain; the great satirist Evelyn Waugh; George Orwell; Claire Hollingworth, the first woman cadet reporter on Fleet Street, who alerted the world to the start of World War II; Elizabeth Jane Cochran (aka Nellie Bly, a Joseph Pulitzer discovery); Martha Gellhorn; Flora Shaw; and many more including Herman Charles Bosman.

Behind The News 2 unpacks the history of the printed press and the challenges that will face the Fourth Estate, As with Behind The News 1 it is a must read for anyone with an interest in newspapers; for seasoned journalists or those contemplating a career in the industry. What counts in the end is ethical and reporting accountability no matter which online portals you use or printed newspapers you read.