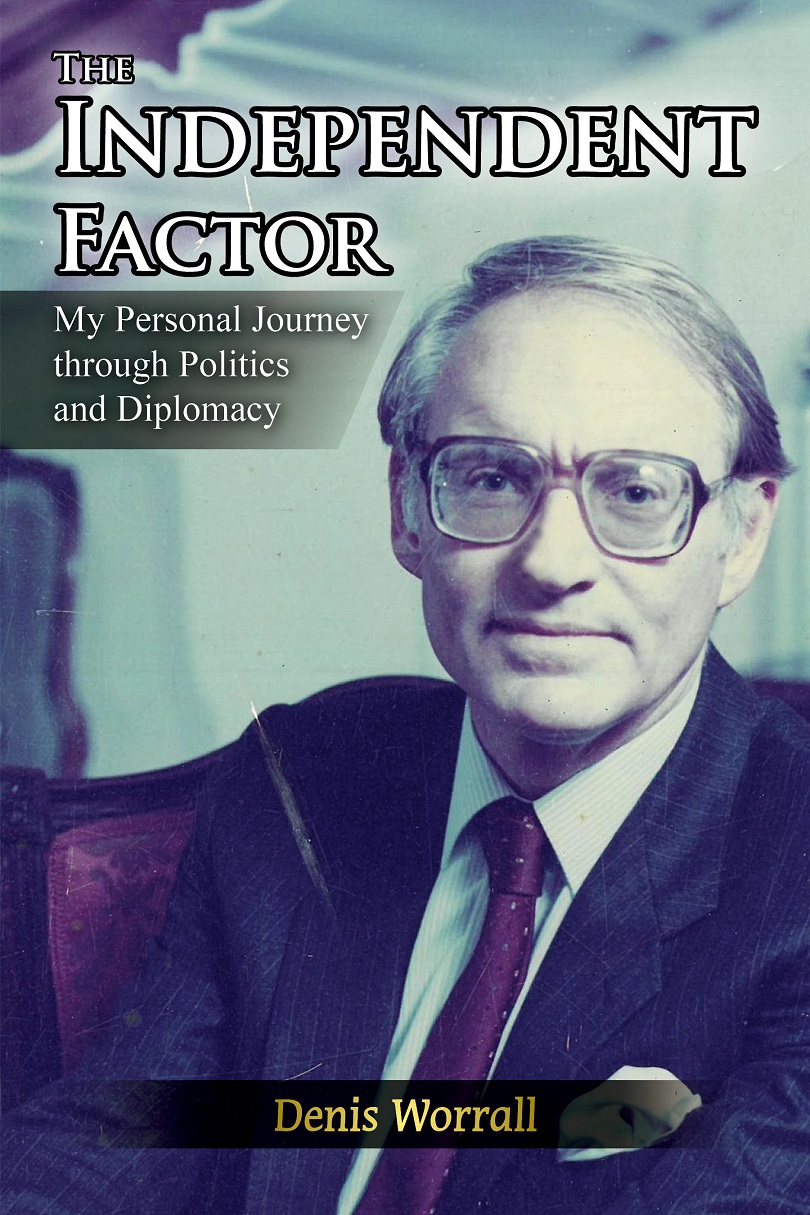 My Personal Journey through Politics and Diplomacy

During his tenure as South African ambassador to Australia and London respectively, Dr Denis Worrall, one of the founders of the Independent Party and the forerunner of the Democratic Alliance (DA), gained the respect of many people, among them, British Prime Minister, Margaret Thatcher and Geoffrey Howe, British foreign secretary in her government. It was only because his side “let him down badly” that he entered the hurly-burly of the hustings and stood as an Independent in the Helderberg, a National Party stronghold at the time.

Worrall was reluctant to accept the appointment as Ambassador to Australia but he was persuaded by foreign minister Pik Botha. The appointment to Australia was not warmly welcomed in many quarters. Colin Eglin, the PFP spokesman on Foreign Affairs, believed the post needed a seasoned diplomat. Others thought that the views Worrall had of black South Africans being included in any constitutional framework exceeded the bounds of government policy at the time.

However, Worrall proved the naysayers wrong. The former ambassador, politician and publisher has had an interesting life and career and he has seen history in the making and been part of it as an insider.

What has always intrigued me about obviously intelligent people like Worrall who has a string of degrees to his name including a PhD from Cornell; could sell the National Party’s abhorrent policies, even the “reformist” ones to the civilised world. Former DA MP Douglas Gibson who became Ambassador to Thailand in 2007, the first time an opposition MP had been elected to this post and Tony Leon, the one-time leader of the opposition was South Africa’s ambassador to Argentina from 2009 to 2012. Both men probably had it easier as their postings came when the “Rainbow Nation” was the darling of the world.

On August 15 1987 when the recalcitrant PW Botha, then the state president,  failed to cross the Rubicon, he sent the rand plunging. Former finance minister, Barend du Plessis, writes Worrall, described the Rubicon speech as a ‘mortal blow’ which sent money streaming out of the country and the rand sliding to a low of 35 US cents. But this didn’t bother Botha who kept insisting that he wouldn’t allow South Africa to be dictated to by the international community.

Fast forward a few years to March 26 2017 when former president Jacob Zuma axed his finance minister Pravin Gordhan, replacing him with a MP backbencher “Des” van Rooyen, that wiped billions off the stock market,  sending the rand into a nosedive. South Africa still hasn’t recovered from Zuma’s move who after four days was forced to reshuffle Van Rooyen and bring back Gordhan, now public enterprises minister, as finance minister.

The Rubicon speech was one of the factors that led to Worrall resigning as ambassador, as he says, “his side let him down badly”. Other issues were the EPG (Eminent Persons Group); the KwaZulu-Natal Indaba; the Coventry Four (which echoes Jacob Zuma and his government’s failure to arrest  Sudan’s President Omar al-Bashir when he was here for a summit in Sandton in 2015). Al-Bashir, who has denied all the charges, is wanted for war crimes, genocide and crimes against humanity. As South Africa is a signatory to the Rome Statute it is bound by its provisions. Five months before Worrall arrived to take up his post, four South Africans were arrested in London in 1984 on charges of violating arms sanctions against South Africa. The four were transported to Coventry where they were detained. After a court case when the men were sent back home, the National Party government broke their solemn promise that they would send the four back to stand trial.  It is a complicated story with many nuances and the chapter reads like a first-class espionage thriller. However, it had “serious implications for South Africa” and reflected badly and unfairly on Worrall’s integrity.

Worrall did a lot of soul-searching before resigning to stand as an Independent (not Patricia de Lille’s Independent Democrats) in the Helderberg Constituency where his opponent was MP Chris Heunis, the Cape Leader of the NP. The Independent Party which had several influential backers including David Gant and Jannie Momberg, was the forerunnner of the Democratic Party, which over the years has become the DA (Democratic Alliance). Worrall has always been a bridge-builder and he positioned himself between the Government and the Opposition. The election on May 6 1987 was a close-run thing and Worrall narrowly lost to Heunis by 39 votes. It was a great victory as Heunis had previously won the seat with a majority of 3 000 votes. It was clear that the people wanted change.

My old friend and colleague, the late Hans Strydom, former news editor and later assistant editor of the Sunday Times, also challenged a sitting National Party MP, the well-known Blaar Coetzee in the 1961 elections, in Vereeniging. Strydom garnered 4 745 votes  compared to Coetzee’s 6 465, losing by just 1 720 votes. Strydom, like Worrall, also made history in that election, not only because of his narrow defeat but through his election poster which read, ‘Blaar is klaar, gee Hans ‘n kans’. Strydom who later won the Northcliff seat for the then Progressive Party on the Johannesburg City Council, often used to show me the poster.

Worrall was born in 1935 in Benoni and his father, Cecil John Worrall, an athlete of note,  was born in Woodstock. “Much later I would come to understand the issues of race classification when I was an MP for the Gardens constituency and most of my work involved helping people in sad and tragic circumstances to have their identity changed,” Worrall writes.

Life wasn’t easy for the Worrall family after a failed farming venture in Cradock and a court case in which Andrew Beyers, who found Hendrik Verwoerd’s assassin, Dimitri Stafendas not guilty by virtue of insanity, was Worrall Snr’s Advocate. But their fortunes changed when his father met William Simpson and they took over a road construction company. The Worrall family “migrated” to Bellville, then Durbanville after which Worrall snr retired to their holiday home in Gordon’s Bay where he died in 1977 and his wife in 2002.

Worrall has had a varied career, from being an executive trainee for an oil company; a judge’s registrar; an Advocate; a newspaper columnist and publisher of an intellectual review; consultant to the World Bank and as a politician when he also served on the President’s Council. Worrall studied in the US, Ghana and Nigeria. He founded the Cape Messenger, an online publication to promote the Cape, (I contributed a few book reviews, but it has since folded).

The Independent Factor is Denis Worrall ‘s memoir and it is one worth reading. It is also the story of the beginning of the end of whites only politics. Worrall was one of the founders on the Democratic Party and the Sunday Times described it as a “watershed moment”. Worrall also offers his analysis of South African politics and he believes that the DA leader Mmusi Maimane should throw their intellectual weight behind Cyril Ramaphosa, for different reasons to Sunday Times columnist, Peter Bruce, who urges DA members to back Ramaphosa because he is the answer to the country’s woes. “But,” writes Worrall, ” it is a strategy that will accelerate the split in the ANC, which some analysts believe is inevitable and will involve the DA in national government.”