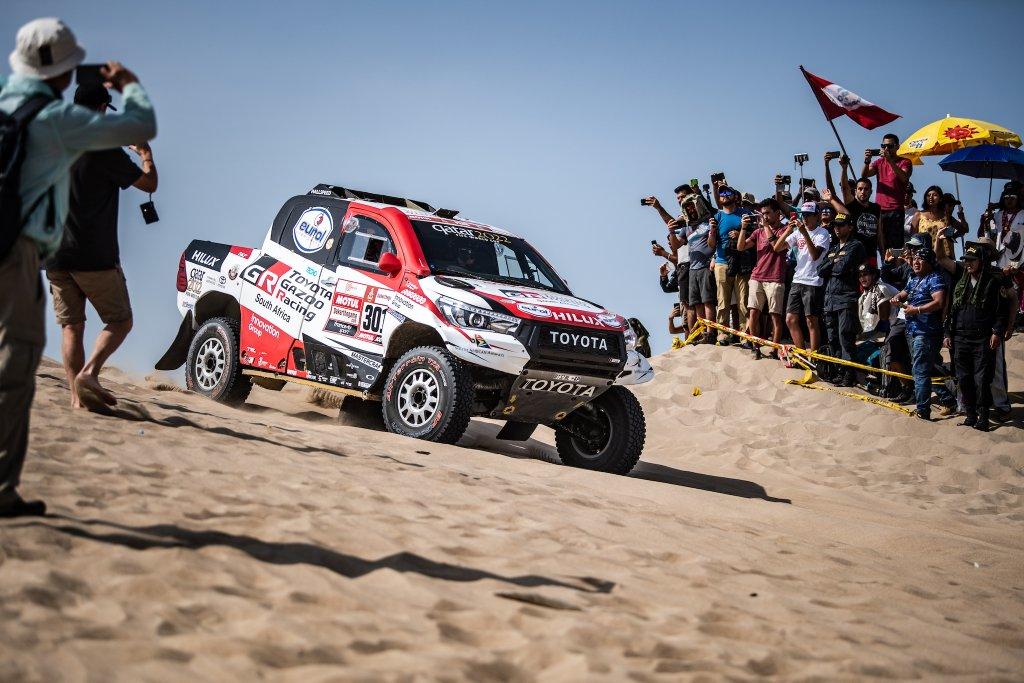 Brian Joss – The final stage of Dakar 2019 drew to a close at the bivouac in Pisco, Peru, and saw Toyota Gazoo Racing SA’s Nasser Al Attiyah and Mathieu Baumel bring home their South African-built Toyota Hilux for a historic victory.

Not only was it a first win for Toyota, but it was also the first petrol-powered car to win the Dakar in the South-American era.

The Qatari driver ensured his French navigator, who turned 43 years old on Thursday, 17 January, received the best birthday present ever, when the pair arrived at the final time control of Dakar 2019 with teammates Giniel de Villiers and Dirk von Zitzewitz in close formation. The two Toyota Hilux crews completed the entire stage together, as De Villiers / Von Zitzewitz waited nearly 55 minutes for the leaders to start the stage, in order to shadow them to the finish.

The emotions bubbled over for Team Principal Glyn Hall, who found himself without words as his two crews drove into the media area after the time control. “This victory was long overdue,” he finally managed, before being swamped in a sea of well-wishers.

The winning driver, however, was much more vocal: “We are so happy to win the Dakar – not only for ourselves, but also for Toyota and the entire Toyota Gazoo Racing SA team. Everyone has worked so hard for so long, and really deserve this. Thank you for letting us drive this car.”

Toyota Gazoo Racing SA led Dakar 2019 from the first to the last stage, with Al Attiyah/Baumel drawing first blood, before handing the mantle to De Villiers / Von Zitzewitz during stage 2. But then a disastrous Stage 3 saw the Qatari retake the lead – a lead he didn’t relinquish despite some of the toughest stages yet seen on any South-American Dakar.

“When we first heard that the rally was going to take place only in one country, we were skeptical,” said Hall after regaining composure. “But the organisers made sure that this year’s race will long be remembered as one of the toughest tests in the last decade.”

Al Attiyah / Baumel’s victory at Dakar 2019 means that Toyota Gazoo Racing has now won both of the world’s toughest automotive races – the 24 Hours of Le Mans, and the Dakar Rally.

As Hall has said before: “Winning the Dakar is never easy – there are a lot of people trying. This year’s race was no exception, and brought a rollercoaster of emotions and results for the team.”

The first serious blow came when De Villiers / Von Zitzewitz tumbled down the order and out of contention on Stage 3, after hitting a rock in thick dust. This relegated the 2009 winners to a supporting role; while a similar fate befell Dutch driver Bernhard ten Brinke and his French navigator, Xavier Panseri just one day later.

“In a sense it was very comforting to have two water carriers supporting Nasser,” said Hall after the race. “But even so, I’d have preferred to have had them challenging for overall positions rather than stage wins.”

Sadly, Ten Brinke / Panseri’s race came to a premature end on Stage 8, when they suffered transmission failure in some of the biggest dunes on this year’s race. This meant that De Villiers / Von Zitzewitz became the sole supporting crew for Al Attiyah / Baumel.

“Obviously we came here to try to win the race,” said De Villiers, who recorded a ninth place in the end. “But once that dream ended, we were happy to support Nasser and Mathieu’s effort. If we couldn’t win it ourselves, the next best thing was for one of our teammates to take the victory, and I am overjoyed at the final result.”

De Villiers, who had only finished outside the Top 10 once in the 15 previous Dakar Rallies he had raced in, clawed his way back up the leaderboard, and found himself in eighth place with just the final stage to go.

“But the organisers ran the final stage in reverse order, and the team decided that Dirk and I needed to wait for Nasser and Mathieu. So, we started the stage, but then pulled over and waited in the dunes,” explained De Villiers. “Luckily our crew had packed two deck chairs for us, so we could watch a bit of racing in comfort.”

The pair waited out the 55 minutes before their teammates launched into the stage, and then followed in close formation. Sadly, this cost De Villiers / Von Zitzewit a place in the overall standings, and they had to settle for ninth in the end. Even so, De Villiers’ Top 10 record remains intact.

For Toyota Gazoo Racing SA, the win in Peru comes as the cherry on top of an amazing Dakar record. “This is the one spot we needed,” said an elated Hall after the dust had settled over the 41st edition of the Dakar. “And it feels amazing to finally win.”