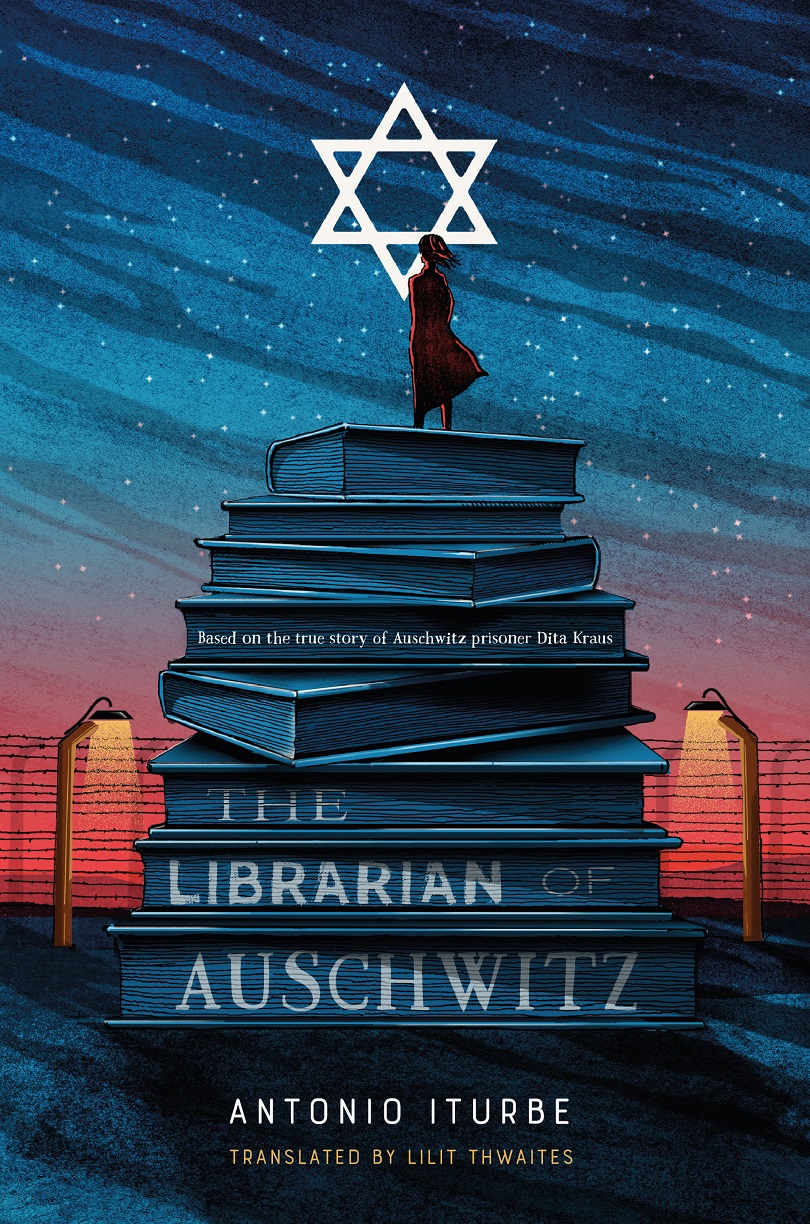 The author is a Spanish journalist and novelist and the book is based on the experiences of Czechoslovakian-born Edita Polachova (her real name) Adler, now Dita Kraus who, at the age of 14, was sent to the notorious concentration camp, Auschwitz and then to Bergen-Belsen. The author explains that “the bricks used to construct the story are facts, and they are held together in these pages with the mortar of fiction”. And therein is the problem with The Librarian of Auschwitz, at least for me.

Dita and her parents lived a privileged life in Prague; until the Nazis came knocking and they were transported to Auschwitz in Poland. There they were assigned to the family camp, another macabre Nazi idea.

In Block 31 the inmates led by instructor Fredy Hirsch establish a secret school for the small children. Hirsch asks Dita to become the librarian and take charge of the eight books smuggled into the camp by prisoners: they are as diverse as they are ragged: one is an unbound atlas with a few pages missing; Basic Treatise on Geometry; A Short History Of The World by HG Wells; A Russian Grammar; a French novel; New Paths to Psychoanalytic Therapy by a professor named Freud; another novel in Russian with no cover, and the eighth book was in Czech, only a handful of sheets held together by a threadbare spine. Hirsch grabbed the book from Dita when she started reading it, saying it wasn’t suitable for children: it was the satire, The Good Soldier Schweik. The meagre cache of books, including six “oral books”,  was a lifeline for the school and the teachers all took turns reading them to the children and telling the stories. It was Dita’s job to look after them books, take them from the hideaway, dish them out to the teachers and get them back. They were a light in the darkness and Dita took her job very seriously.  If the Nazis found them it would mean her death.

There are graphic scenes of violence and Iturbe pulls no punches as he describes how the Jews were transported, beaten, tortured, sent to the gas ovens and how the bodies were dumped in mass graves, and how the ash from the crematoria covered the concentration camp. The story is slow-moving and there is a lot of repetition. It has been written in narrative form and though it lacks passion and any emotion it is a heart-breaking story. It appears as if something was lost in translation.  I don’t think it will stand alongside the pantheon of great Holocaust literature, fiction or non-fiction, but it is worth reading. Iturbe did interview Dita Kraus and he accompanied her to the Terezin Ghetto and other sites. It would have been a much better book if Iturbe had allowed Kraus to tell the story, then there would have been no need for the device of fiction.

The Librarian of Auschwitz features real life characters: Fredy Hirsch, who apparently committed suicide because he was asked to lead an uprising; Rudi Rosenberg who with Fred Wetzler escaped from Auschwitz and later wrote a report detailing the horrors of the camps for the Hungarian Jewish Council, which was ignored. But Wetzler’s report was much more detailed and that he wrote when he reached Britain was used as evidence at the Nuremberg Trials; David Schmulewski was the Polish leader of the Resistance in the camp; Siegfried Lederer escaped with an SS officer Victor Pestek whose desertion cost him his life. Lederer narrowly escaped the clutches of the Gestapo and spent the remainder of the war in Slovakia helping the Partisans; Seppel Lichtenstern was one of thousands on the “death march to nowhere” who were executed by the Nazis, he is buried in the Saupsdorf cemetery in Germany; Margit Barnai was Dita’s friend in Auschwitz and lived in Prague for the rest of her life she and Dita, who lives in Israel,  never lost touch and Dita still has contact with Margit’s daughters and visits them in Prague whenever she can. They are the heroes.

Truth is always stranger than fiction and you could never dream up the horrors of Nazi Germany and what went on in the death camps where millions of Jews were sent to the gas ovens as part of Hitler’s master plan to wipe the Jewish nation from the face of the earth. Not to forget, it was where Dr Joseph Mengele carried our his gruesome medical experiments. Gypsies, homosexuals and others who didn’t fit the Aryan stereotype were also tortured, shot on sight and dumped into mass graves. And then to embellish it with fiction makes no sense, as if the scale of murder wasn’t enough. The monsters featured are Elisabeth Volkenrath, a former hairdresser, was the head female guard at Auschwitz and she had no compunction executing the Jewish prisoners. Later she was transferred to  Bergen-Belsen as supervisor. She was arrested when the British liberated the camp and she was later hanged. The others include Mengele; Rudolph Hoss, the Kommandant of Auschwitz who managed the death machine, he was also hanged; and, Adolph Eichmann who had a major role in the Final Solution. The Israeli secret service arrested him in Buenos Aires and took him to Israel where he was condemned to death and the sentence was carried out in Jerusalem on June 1 1962.