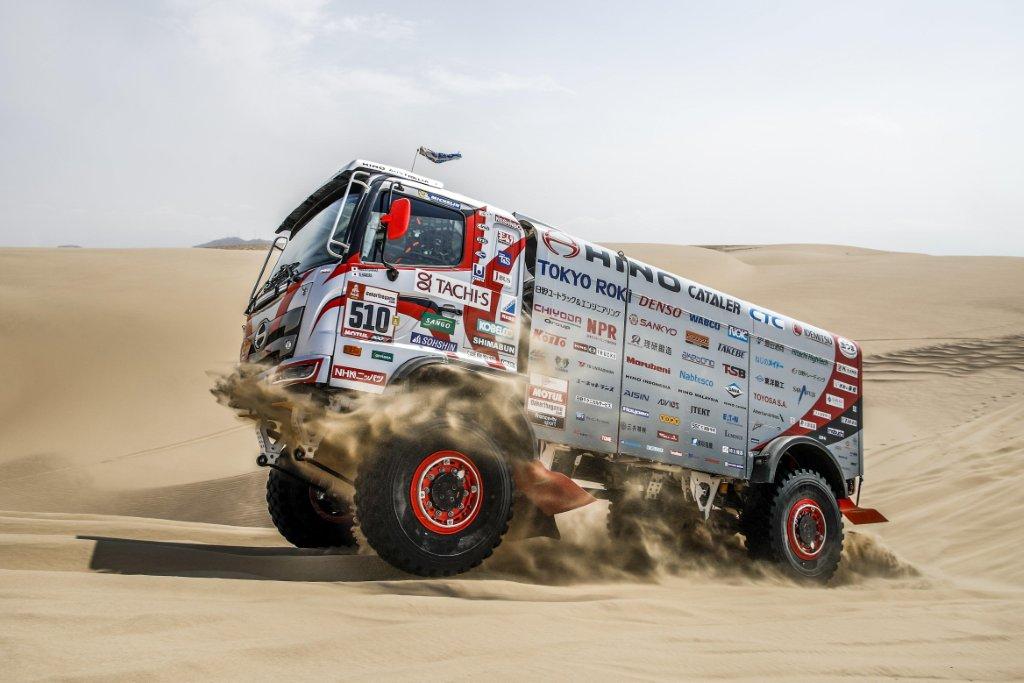 Brian Joss – Hino, the leading Japanese truck manufacturer, registered a 27th successive finish in the gruelling Dakar Rally, which took place in Peru recently. Hino has had at least one of its trucks qualify as a finisher in every Dakar staged since it competed for the first time in 1991.

This year only 14 trucks from an initial entry of 41 qualified as official finishers, with the Hino, crewed by Teruhito Sugawara and Katsumi Hamura, taking ninth position overall and winning the class for trucks with an engine capacity of less than 10 litres for the 10th consecutive year.

Sugawara’s father,  Yoshimasa, failed to finish because of a mechanical problem. This was only the third time that a Hino has failed to finish a Dakar Rally. The first time was in 2010 when one of the Team Sugawara trucks was disqualified for missing a route checkpoint.

Then, in 2018, early into the second stage the Hino of Dakar veteran Yoshimasa Sugawara damaged the front wheel drive against a rock and the truck could not be recovered without outside support, which resulted in disqualification. A similar problem affected Yoshimasa again this year and he had to withdraw on the second day when he could not get his truck free from loose sand on the dunes.

Despite this setback, Yoshimasa, now 77, says he is already aiming to compete in the 2020 Dakar Rally. This year’s Dakar was his 36th consecutive event, having competed in the motorcycle, quad, car, and truck categories over the years.

His son, Teruhito, has now notched up 21 Dakar Rallies and he has finished on each occasion. First he was a navigator for his father and since 2005 he has driven his own Hino. He has only finished out of the top 15 overall twice in 14 Dakar Rallies as a driver.

This year’s event took place in Peru only and included many timed stages over huge dunes with treacherous loose sand to catch out the unwary. The event took place over 11 days from January 6-17.

Yoshimasa Sugawara, who has been the team principal ever since Hino entered its first Dakar Rally in 1991, says: “Hino’s passion is for technological innovation and this famous event continues to provide the ideal challenge for us. It renews our conviction that there is no such thing as unrewarded effort.

“We believe that the Hino spirit, which drives us to constantly adopt technological innovations in our trucks, races with us through the Dakar Rally,” said Yoshimasa who has entered more Dakar Rallies than anybody else in the world.