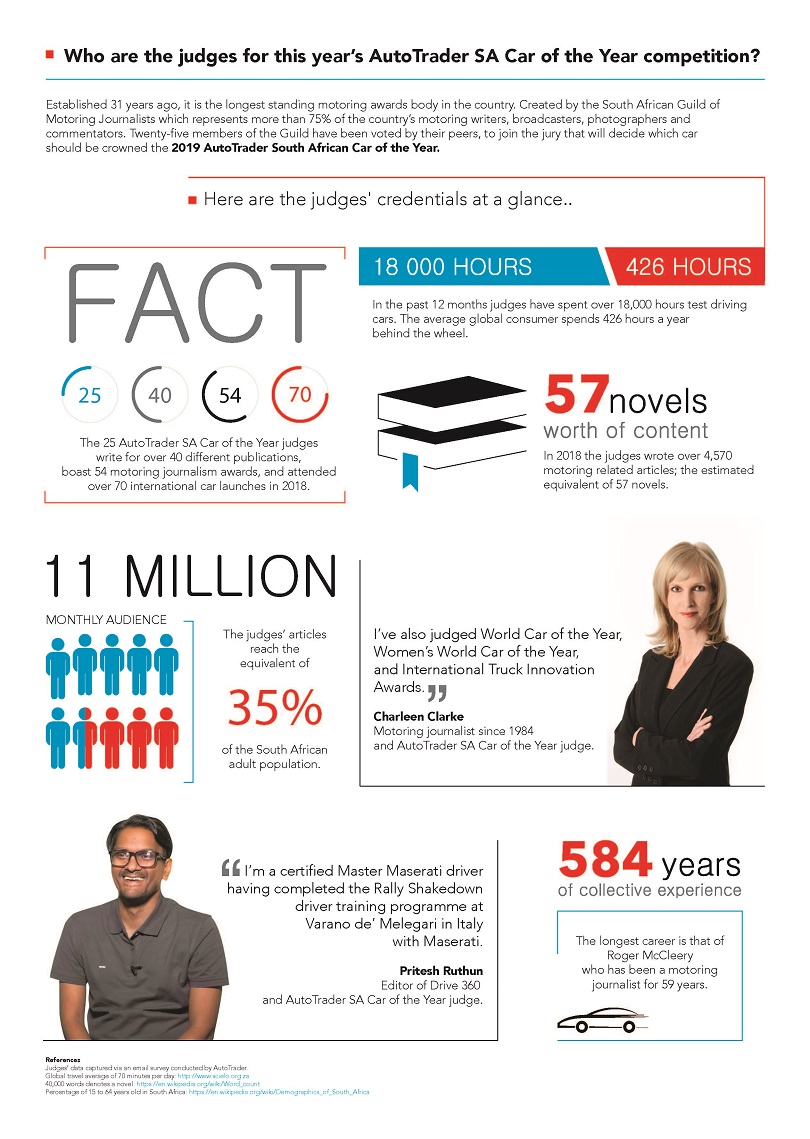 Twelve exceptional vehicles hailing will be put to the test on 11 and 12 March 2019 at Kyalami Grand Prix Circuit, as part of the AutoTrader SA Car of the Year testing days.

The vehicles will be driven by a panel of 25 expert judges, all of whom have been voted to judge by their peers within the South African Guild of Motoring Journalists. “Collectively, the judges have amassed decades of knowledge and experience in a broad spectrum of motoring fields. They are the best people in the country to subjectively judge these market-leading vehicles,” commented George Mienie, AutoTrader CEO and sponsor of the awards.

So just who are the judges?

The 25 judges who make up the panel are:

How are the vehicles judged?

Each vehicle will be tested by all 25 judges who will score them against their direct class competitors in the current market on aspects such as exterior and interior design, engine and transmission performance, ride and handling, braking, safety features, overall excellence and affordability.

Who are the twelve finalists?

The list of finalists includes three hatchbacks (the Nissan Micra, Suzuki Swift and Mercedes-Benz A-Class) as well as one hot hatch (the Honda Civic Type R).

There is one sedan in the Iine-up (the Lexus ES), one small 4×4 (the Suzuki Jimny) and one crossover (the Renault Duster). Then, in keeping with the global popularity of sports utility vehicles (SUVs), the balance of the list is made up of SUVs – the Alfa Romeo Stelvio, Hyundai Kona, Mitsubishi Pajero Sport, Porsche Cayenne and Volvo XC40.

“The judges will have their work cut out for them when it comes to evaluating the SUVs,” says Rubin van Niekerk, Chairman of the Guild. “They represent the crème de la crème of the SUV crop. The Stelvio, Alfa’s first SUV, is a good looking car while the Hyundai Kona has a bold and bespoke design, which is also sure to turn heads. The Mitsubishi Pajero Sport is very capable off-road while the Porsche Cayenne is at the top end of the SUV game and the Volvo XC40 has already garnered countless awards, which is a testament to its credentials,” Van Niekerk adds.

For the first time in the 34-year history of the contest, categories have been introduced.

The five categories in the 2019 event are:

All entrants must meet one major requirement in order to win a category: they must finish in the top six out of the 12 finalists in terms of overall scoring.

Can you watch the test days?

Although the testing days are exclusive, look out for the branded cars on the 12 March as the judge’s test drive the cars on the road.

The winner for the 2019 AutoTrader South African Car of the Year will be announced early in April 2019.