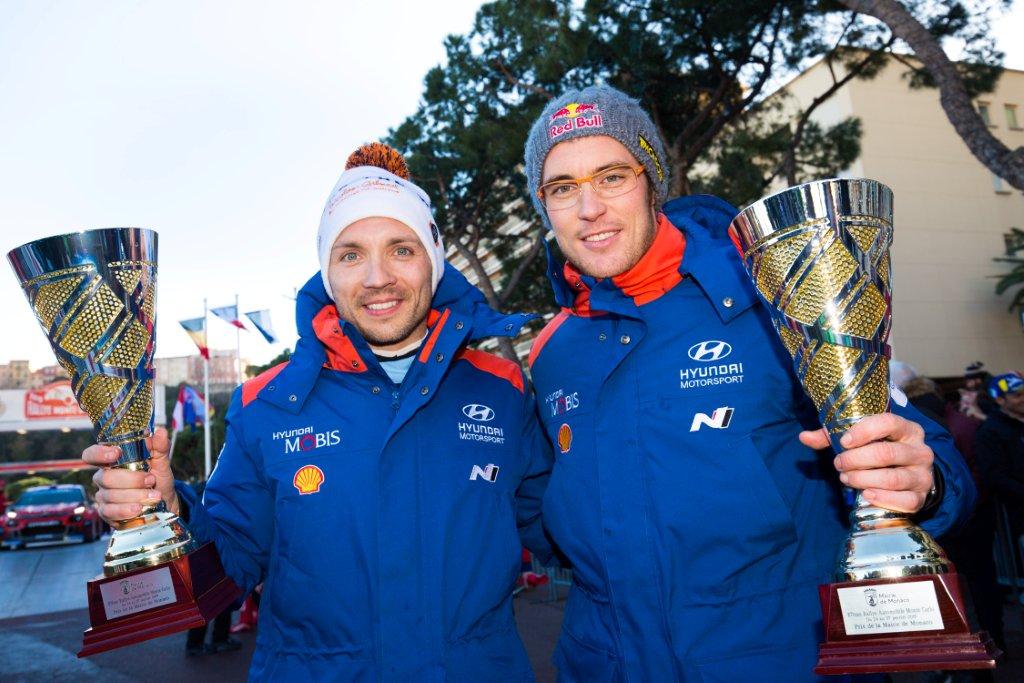 Brian Joss – In a thrilling start to the new 2019 FIA World Rally Championship (WRC), Hyundai Motorsport was involved in a high-octane charge for victory at Rallye Monte-Carlo on the past weekend with Thierry Neuville finishing in a close second place behind Citroën’s Sébastien Ogier.

The closest ever Monte-Carlo rally went right down to the wire with Neuville extracting maximum performance from his Hyundai i20 Coupe WRC alongside co-driver Nicolas Gilsoul. After 300km, just 2.2-seconds separated the top-two, a sensational start to a new championship.

For Hyundai Motorsport, a fighting fourth place finish for Sébastien Loeb and Daniel Elena in their first rally with the team underscored a positive opening weekend. Despite just one day of testing prior to the rally, the crew claimed two stage wins and were firmly in the podium hunt.

Sunday’s itinerary included two runs through the 18,41 km La Bollène-Vésubie-Peira Cava (SS 13/15) and 13,58 km La Cabanette-Col de Braus stages (SS 14/16), the latter being run as the Power Stage. Neuville claimed his third stage win of the rally in SS 15, taking the team’s total for the weekend to five, and scored three extra points in a captivating Power Stage.

It was a fantastic start to the 2019 FIA World Rally Championship (WRC) for Hyundai Motorsport, as the team took an early lead in the manufacturers’ championship with 30 points.

Andreas Mikkelsen and Anders Jaeger-Amland also impressed during the weekend, pushing hard for a podium on Saturday morning, prior to their untimely retirement.

Thierry Neuville/Nicolas Gilsoul: Neuville and Gilsoul’s second place is their best ever result in Rallye Monte-Carlo. They recorded three stage wins over the weekend and scored three Power Stage points.

Neuville said: “What an incredibly close fight! We can be pleased with this result, which gets our 2019 campaign off to a very positive start. Of course, when you are in with a chance of fighting for Monte-Carlo victory, you want to push for it, but it wasn’t to be on this occasion. We gave it everything we had, but a small mistake on Friday cost us the lead and we weren’t quite able to catch it back. That’s part of the game.”

Sébastien Loeb/Daniel Elena: After being podium contenders all weekend in their first event for Hyundai Motorsport, Loeb and Elana had to settle for fourth place, which helped the team to the top position in the manufacturers’ championship after the first round of the 2019 season. Loeb

said: “It has been an exciting weekend for WRC with an incredible battle for the victory and the podium. Fourth place is not so bad. I struggled with the set-up of the car on occasions, which is to be expected with such little time to test before the event. We made adjustments in between each loop in an effort to find our way, and we made good progress.

“We have to continue like this and see what we can achieve in Sweden. To be fighting for the podium in my first event for Hyundai Motorsport gives us all the motivation we need for the next rally. It’s a pleasure to be part of this team, and a positive way to start a new relationship.”

Team Director Andrea Adamo said it was an incredibly tight battle all weekend, and a fantastic way to begin a new WRC season. “If someone had told us before the event that we would finish second and fourth, I think we would have taken that. I’m very happy with the result, our most competitive Monte performance, and pleased that we could play such an influential role in the rally. All our crews demonstrated strong, competitive pace, and were capable of finishing on the podium. Next up is Sweden, an event we won last year.

We’ll be setting out to defend that in a few weeks’ time.”