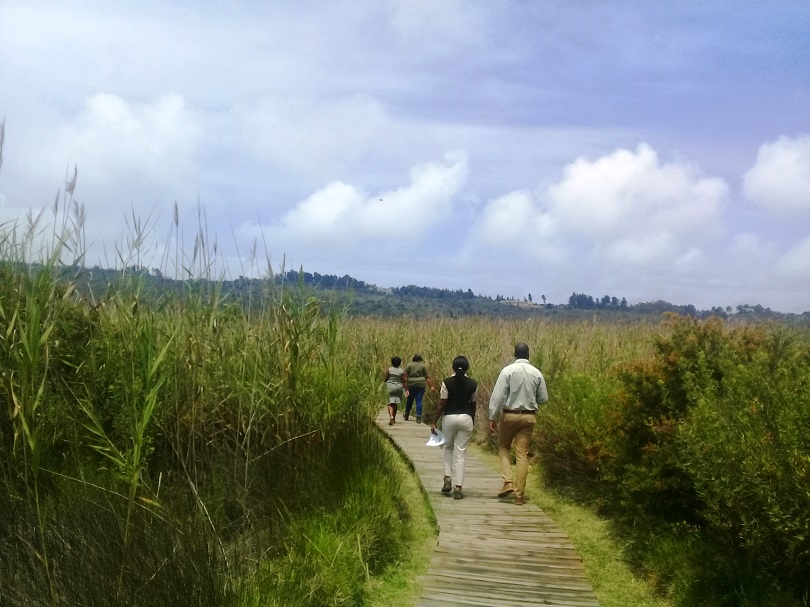 Question: Why are wetlands so important?

NM:  They have a variety of ecological and economic benefits. These include the provision of ecosystem services, the regulation of flood water. They are home to a variety of animal and plant species. They are like a giant sponge, holding water in during wet seasons and slowly releasing it during dry periods, ensuring a consistent supply of water for the inhabitants of the wetland.

Question: What is a Ramsar site?

PN: It is a wetland of global significance and has to fit a select criteria set by the Ramsar Convention, a global body overseeing the management of wetlands. In Rondevlei for example, where we are, there is a diverse population of bird and fish species. We have 20,000 migratory species which come to the site and leave during periodic seasons.

Question: Why does Wilderness have a Ramsar site?

PN:  Three Lakes in the Wilderness Lakes system made up of Rondevlei, Langvlei and Eilandvlei is a Ramsar site (wetland of global significance).  The selection criteria for Ramsar sites are specified by the Ramsar Convention also known as the Convention on Wetlands of International Importance. They consider factors including and not limited to ecology, botany, zoology, limnology or hydrology.  The site in Wilderness includes a dune system with associated thickets, woodlands, marshes, and reedbeds. Important numbers of locally-migrant resident birds as well as staging and breeding birds use the site. It is home to 285 native plant species, 32 fish species (several of which use the site as a nursery area), and a diverse marine invertebrate fauna.

Question: Why visit a wetland in Wilderness?

PN: Wilderness has dedicated bird hides very close to wetlands. It is a bird lover’s paradise! Visitors also enjoy the sense of place provided by wetlands.

Intern in the Knysna section Thabiso Mokoena and Wilderness’ Courtney Kalink encourage everyone to learn about the importance of wetlands. ‘Don’t dump rubble or litter as wetlands absorb these. Use environmentally friendly products wherever possible. Raise awareness of wetlands in your area. Visit a wetland and do a clean-up of the area.