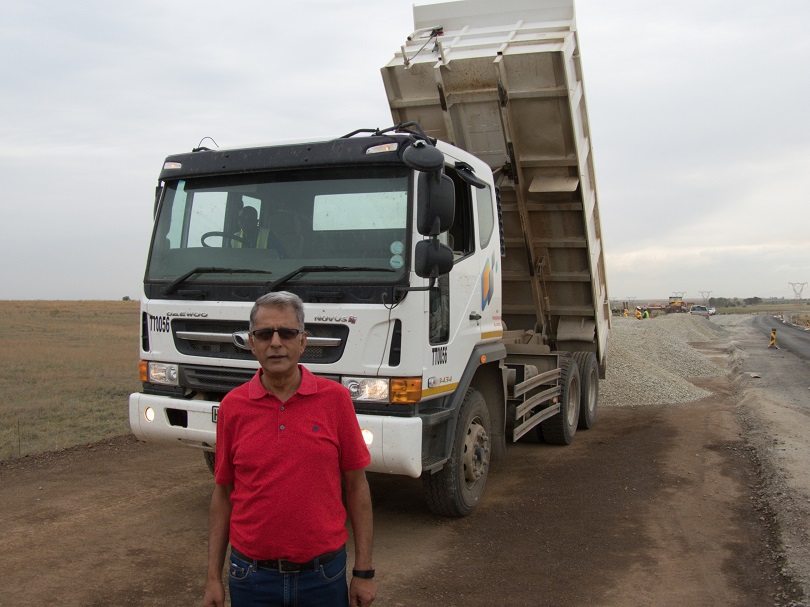 Having purchased earlier this year 10 of the Korean manufacturer’s trucks to join the company’s 56-strong fleet, Saley says it was his positive experience of older models and the structuring of the purchase, as well as service and support from the Daewoo team that motivated him.

“I’m glad I did,” he says. “The Novus is well-suited to our needs. We bought the vehicles new last January – and since then they’ve proved reliable and economical, delivering top-rate service and helping us to increase our productivity.”

On the latter point he says it’s the performance of the Novus’s 340 horsepower engine that helps to move a fully laden truck efficiently and speedily between pick-up and delivery points, while tip times compared with those of rival brands are quicker, too.

“We have a selection of brands in our fleet,” he says. “Where most of the rival models complete an average of six trips during a shift, the Novus manages eight – that’s an extra 20 cubic metres of material per truck transported over the same time period, translating into much higher productivity and less cost.”

The scissor-styled mechanism which the Novus employs to raise and lower the tipper helps to cut off-load times by a substantial margin. “It’s a fast, reliable system,” he says.  “Coupled with the Novus’s efficient behaviour on the road – its engine produces about 60 horsepower more than most units found in the sector, helping the vehicle to maintain steady momentum up long gradients – contributes to the time-saving effort.”

Saley says that in his experience, the Daewoo is easy to maintain. “It’s a profitable truck,” he continues. “Service centres are close to areas in which we operate – and if anything goes wrong we have peace of mind that technicians will be on site quickly. We’re very happy with the aftersales service we’ve received.”

In Daewoo’s favour was the fact that the truck incorporates modifications suggested by South African customers like us.  In many ways the ruggedness and reliability of the Daewoo Novus is like a truck that’s been built for local conditions, which means it should last for a long time.

Comparatively, many trucks from Europe are too sophisticated in their make-up – they carry too many electronics and are often more difficult to maintain and repair.”

Saley points out that a modification suggested by SedBuild to Daewoo to relocate the Novus’s rear lights on the units they bought was made without question. “We felt the original positioning made the lights too vulnerable to damage and asked if they could be recessed – Daewoo complied,” he says.

Drivers find the truck’s cabin to be comfortable.

“They’ve lodged no complaints, ” Saley says. “In fact, quite the opposite – they are full of praise for its features and levels of safety. In all, Korean craftsmanship is very good.

“We have a very good relationship with the brand’s representatives. They have been very helpful in all our dealings. Since we operate in all areas of South Africa – often in places that are well off the beaten track – we have to rely on suppliers who keep their promises. In this respect, we have had no problems with Daewoo.”