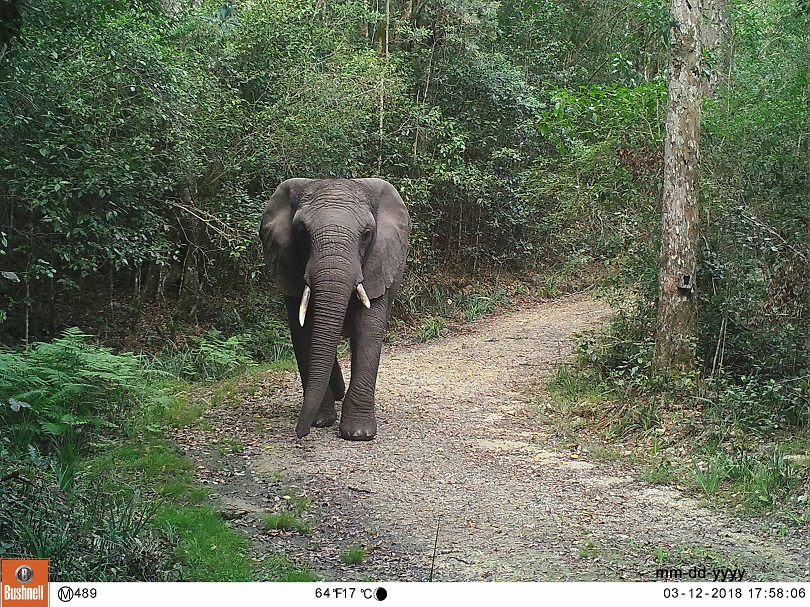 Research conducted by SANParks scientists has confirmed the presence of a female elephant roaming the Knysna forest. Lizette Moolman, SANParks scientist says ‘the Knysna elephant is of the same subspecies as all the other elephant populations in South Africa, namely Loxodonta africana.

The elephants that roam in Central African rainforests are of a different subspecies namely Loxodonta cyclotis.’

The latest Knysna elephant survey used camera trap technology which covered the whole elephant range. She says ‘because elephants move along defined elephant pathways, we placed our cameras on these paths and covered the elephant range evenly, with spaces between camera traps no larger than the smallest range recorded for elephants. In other words, an elephant would not reside in a gap area, between camera trap locations, for the duration of the survey. The cameras were all active for 15 months, and during this time the same female elephant was identified in 140 capture events, always by herself. No other elephants were photographically captured’

There is now more information about the elephant such as her age and behaviour. ‘She is about 45 years old and moves in the indigenous forest and fynbos areas on SANParks and neighbouring private land’ says Moolman.  Her reproductive status is uncertain.

The camera traps have also assisted SANParks management to understand who else lives in the forest. So says Paddy Gordon, Park Manager of the Garden Route National Park, ‘camera traps have assisted to inform management not only about the elephant, but also about other wildlife prevalence and movements, and how these are potentially disturbed by both legal and illegal activities in the forests.  We will use the information provided by this research to further monitor and manage the forest areas, fynbos and neighbouring private land.’

Head of Scientific Services, Stef Freitag-Ronaldson says ‘we are proud of the work undertaken by Moolman and team. SANParks has conducted numerous meetings and workshops with stakeholder groups about this research and its findings.

Some of these workshops specifically dealt with identifying, discussing and risk-analysing possible management options for the Knysna elephant.’  She adds ‘the situation is complex, with many unknowns.’

A research paper compiled by SANParks in collaboration with other scientists is now available detailing the camera trap survey:  Moolman, L. de Morney, M.A., Ferreira, S.M., Ganswindt, A., Poole, J.H. and Kerley, G.I., 2019. And Then There Was One: a camera trap survey of the declining population of African Elephants in Knysna, South Africa. African Journal of Wildlife Research, 49(1), pp.16-26.