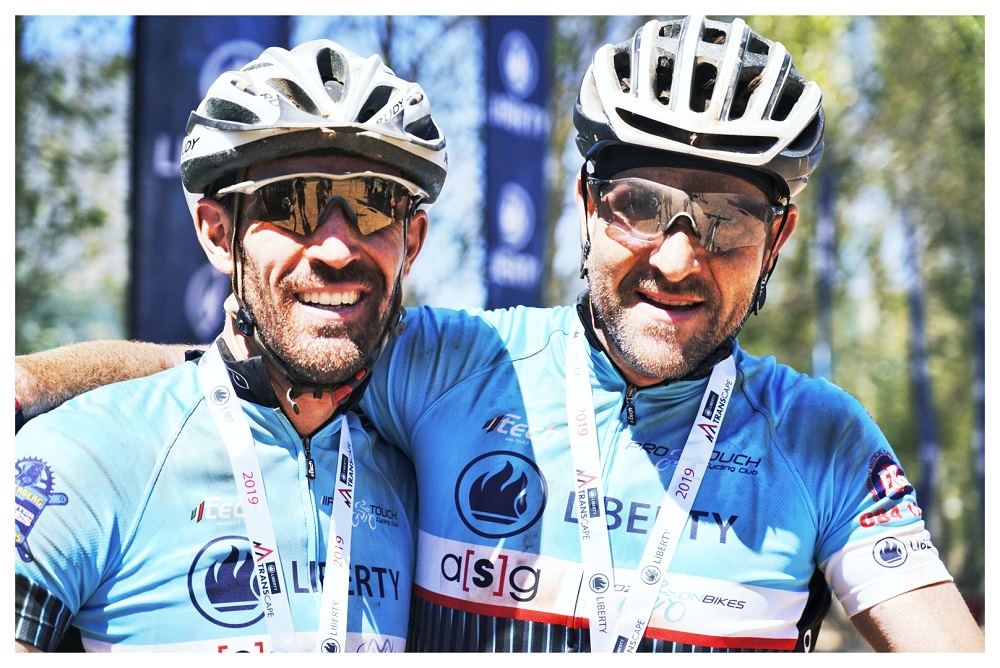 Justin van der Linde and Albertus Jooste won the 70km final stage of the Liberty TransCape MTB Encounter from Grabouw to Franschhoek in the Cape Winelands today to clinch the overall title for the first time.

The Rustenburg team began the last day of the 591km, seven-stage mountain-bike race with a handy cushion and completed a successful week by crossing the finish line at Holden Manz Wine Estate in 3:38:33.

They were followed home on the day by Dirk Haentzschel and Mario Hakim Abu-Id, who won the third and fifth stages, with stage one winners Damien Ingram and Stuart Cathcart filling third place.

Van der Linde and Jooste had an overall time of 26:42:44, with Ingram and Cathcart in second place. Filling third spot were Haentzschel and Abu-Id.

Riding in their second TransCape, which is powered by Volvo, Van der Linde said they had no great expectations at the start of the week and were “really just looking forward to the experience”.

“After the first stage [from George to Oudtshoorn] we ended up five minutes behind the leaders,” he said.

“But we took the second stage, building up a decent lead of about 15 minutes. That made us review our strategy and we then decided to try to protect the lead.

“So we rode a bit more strategically from that moment and did not always go at full throttle.”

Van der Linde said they almost came unstuck on stage five when a crash in the peloton saw him suffer a damaged back wheel, which set them back.

“But we managed to get going again and lost only about nine minutes.”

In today’s final stage, he said they rode in the bunch until they were able to break away up Franschhoek Pass to complete the stage win and the overall victory.

Besides taking the honours, Van der Linde said it had been “another brilliant experience”.

“The venues and the hospitality were so good and the off-the-bike experience makes this race tremendous value for money.

“To experience the different trails you find in the Cape Winelands is superb.

“Last year it was just the two of us from Rustenburg, and this year we were joined by two friends. I definitely believe this field can grow.”

Germany’s Udo Mueller retained his solo category title he won at the first attempt last year and said it had been “another wonderful race”.

He won the stage in 3:26:29 and was followed home by compatriot Stefan Hackl and South African Jan Braai.

“The feature of the TransCape is that you are so well cared for once you finish your stage until you start the next day,” he said.

“The spirit of the race and the chance to mix with the other riders at the post-stage functions really makes this event very special.

“And then you also have the experience of riding the beautiful trails through the Western Cape.”

The German said he would definitely be urging his cycling friends to experience the high-quality event the race organisers offer.

“It’s a race I will recommend to anyone and after there were just two of us from Germany last year, this time there was a group of six. So maybe next year there will be even more.”