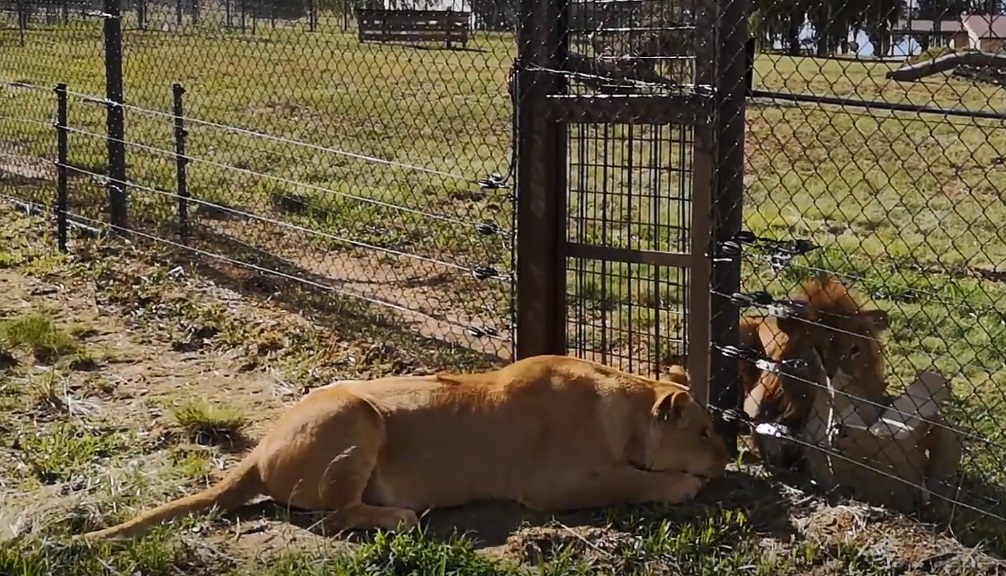 Cape Town, 6 February 2019 – The lioness transferred to South Africa from Spain in October 2018 has settled in at the international animal welfare organisation FOUR PAWS’ sanctuary and is showing promising signs of interaction with her neighbour Saeed – the war lion rescued from Syria.

Nala, who was rescued from an illegal French circus breeder by AAP Animal Advocacy and Protection, spent time at Primadomus in Spain to rehabilitate and was later transferred to the LIONSROCK Big Cat Sanctuary in Bethlehem, South Africa, by FOUR PAWS. The organisation hopes that Nala and Saeed would eventually be socialised and has carefully been monitoring the interaction between the two animals.

“We have placed cameras which are monitoring the interaction between her and Saeed, our male who is in the neighbouring enclosure and those videos are checked to evaluate their behaviour towards each other. In the first few weeks after her arrival, we saw that Nala was the one regularly seeking friendly contact with Saeed, but he didn’t respond in the same way. We have, however, noticed now that Nala and Saeed have spent some time next to each other in their enclosures and we’re carefully optimistic about their future,” says Hildegard Pirker, head of animal welfare at LIONSROCK.

“Once we think Nala is confident enough, we will let them explore each other’s enclosure and evaluate their behaviour again,” says Pirker.

The team at the South African FOUR PAWS sanctuary has already socialised five pairs of lions and helped another 15 lions join different prides. In doing so, FOUR PAWS follows a strict no-breeding policy.

“More than 100 rescued big cats live in LIONSROCK. They come to us from zoos, circuses and dubious breeders. Most of them have suffered from terrible keeping conditions. It is our duty to offer these animals a peaceful species-appropriate environment for the rest of their lives, while at the same time, breaking the cycle of breeding in captivity,” says Fiona Miles, director of FOUR PAWS in South Africa.

“We’re incredibly happy with Nala’s progress! No animal should go through the suffering that she, and so many other of the big cats here at LIONSROCK, had to go through,” says Miles.

Nala comes from an illegal circus breeder in France and was rescued by AAP Animal Advocacy and Protection. After completing her long rehabilitation in Spain the lioness was moved to the FOUR PAWS Big Cat Sanctuary LIONSROCK in South Africa.

FOUR PAWS is an international animal welfare organisation committed to encouraging people to treat animals with respect, compassion and understanding.

Since 1988, FOUR PAWS has helped wild animals kept in captivity, farm animals and pets as well as strays to the right to live a dignified life in an environment suited to their species.

With offices in over 10 countries, the Foundation is working to generate sustainable improvements on political, social and economic levels. Our work is based on scientific expertise, sound research and intensive national and international lobbying.

Our individual campaigns and extensive educational activities to promote awareness give animals an urgently needed voice. We run our own aid projects where we give animals a chance for a new life.

FOUR PAWS takes a problem-solving approach and offers animals in distress swift and direct aid. Our aim is to achieve and establish changes in politics, society and the economy that will benefit animals – through projects, campaigns and education.

FOUR PAWS operates the big cat sanctuary LIONSROCK in South Africa on a 1,250 hectare site. FOUR PAWS offers lions that were able to be rescued from breeding farms, zoos and circuses a secure and species appropriate place to live out their lives at LIONSROCK.

In the South African big cat sanctuary, there are lions from both breeding and hunting farms; they have been spared a gruesome end, to be hung on the wall of a hunter. They are free to live the remainder of their lives in a safe and natural environment, free from distress and suffering.

The enclosures for the big cats and other carnivores take an area of 60 ha. In the rest of the park, other typical South African species live freely.

LIONSROCK has a fully serviced lodge and is a destination where animal welfare and tourism meet.