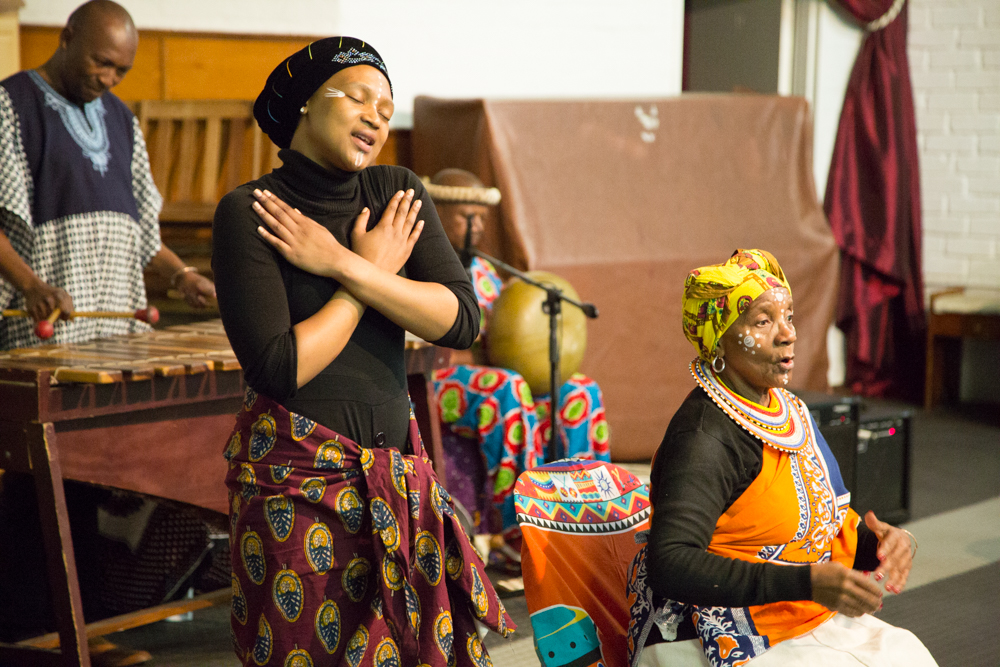 For the first time, an all Xhosa children’s theatre production at US Woordfees featuring the doyenne of SA storytelling, Sindiwe Magona.

Magona along with two actors, performs a combination of two of her most popular stories, “The Best Meal Ever” and “Stronger than Lion” to the live soundtrack of Sotshononda’s beautiful indigenous music. In the absence of their mother who had to visit family in Transkei, a big sister must take care of all her siblings, with dwindling food supply. When she realizes that the food stock has run out, she must derive a plan to help her young siblings from the extreme hunger. Our story is one of hope and courage, teaching children to never give up and that brains are much stronger than brawn.

The production will entertain and educate children through the power of the imagination and in turn preserve and document the rich Xhosa tradition of storytelling as well as the wealth of indigenous Xhosa songs. It will encourage creativity and nurture an interest in the children’s own culture and the arts, create a love for reading and music and to develop the imagination.

“While all stories enrich, mother tongue stories do a whole lot more; they anchor the child into the specific realm of the inherent self-inalienable and perpetual. Just as no child in the world should ever be denied the citizenship of the country of her birth, no child should ever be denied or deprived of the privilege of mother tongue. It is a birth right, sacred. To de-tongue a child, even by neglect or oversight, should be considered a criminal act,” explains Magona.

“The child who reads or hears stories in her mother tongue is much more likely to meet herself in books; see, hear and learn from characters who remind her of herself, people like her, situation and problems familiar to hers. Even those that may present the unfamiliar will have a ring of ‘new’ but within her world,” concludes Magona.

KWATHI KE KALOKU  is presented by The Cape Town Music Academy (CTMA)  CTMA is a not for profit company (NPC) that seeks to create opportunities for local, established and emerging musicians and related artists in the Western Cape.

Kwathi ke Kaloku is suitable for all ages, and specifically for 6-13 year olds. It will be enjoyed by parents and teachers alike.